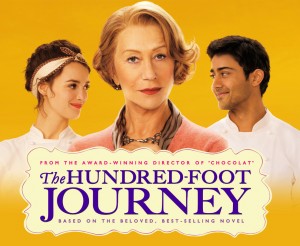 I am a sucker for anything with Helen Mirren in it and The Hundred Foot Journey did not disappoint. Now I am certainly not saying this is a brilliant film, just a very entertaining one. As Husband succinctly put it on leaving the cinema last night, “What a load of cobblers” but he meant it affectionately. The storyline is ridiculous but absolutely charming. You know what will happen, but you don’t care… you are just quite content to be swept along with the story.

Dame H. is rather good as the stiff owner of an elegant French restaurant – I have this on good authority as we had French friends staying with us and they told us she’d got it just right (in rather loud voices in the middle of the film actually!).

This is the storyline:

Hassan Kadam is a culinary ingénue with the gastronomic equivalent of perfect pitch. When Hassan and his family, led by Papa, move to a quaint village in the South of France with the grand plan of opening an Indian restaurant in the picturesque countryside, they are undeterred by the fact that only 100 feet opposite stands a Michelin starred classical French eatery. However upon encountering the icy proprietress, Madame Mallory, the Kadam family realise they may have bitten off more than they can chew.

Check out the trailer here if you want to get a feel of this lovely little feelgood film.