I Am Pilgrim ~ Terry Hayes / CountryWives 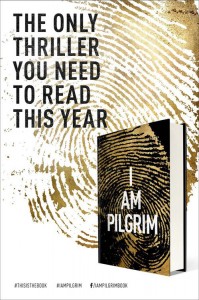 This book has been so talked about and I know so many reading it and to a T they and I have all loved it. I took it on holiday and so eulogised about it whilst reading it that my OH kept asking for me to hurry up so that he could read it. However we found a well thumbed copy of the said book on a bookshelf, so obviously the owners of the villa were fans too. Rarely do I read a book on Kindle and then buy a hardback for my bookshelf, but I did not hesitate in doing so with this book as I know it is one that I will want to lend out. Political thrillers are not normally my thing, however if they were all like this it would be my favourite genre.

The book has received 5 star reviews from a broad spectrum of reviewers:

A full tilt mix of Homeland, The Wire and The Bourne Ultimatum” Mail on Sunday

“The narrative is thrilling: the tension tightens with action…It’s a murder mystery, an illuminating account of contemporary international politics and a study of an unusual man…An excellent thriller which as a first novel is really remarkable” Literary Review

It is a debut novel however Terry Hayes is an acclaimed writer of screenplays having won over twenty television and film awards, so he is a master of the written word and I can imagine that this book will be made into a film, probably a blockbuster. I advise you to read the book first though as it is over 700 pages long and I cannot imagine a film will do it justice. One of the elements I liked about I am Pilgrim is that some of the situations feel like they were pulled from today’s headlines and so it’s not hard to understand the motivations of the characters as Hayes builds their backgrounds, and it made me wonder just how often these situations are actually playing out right now (and will haunt us down the road).