It’s becoming a bit of a ’thing’ in my circle to renew marriage vows. I think it’s because those of us who didn’t divorce and remarry are feeling a bit left out? We were trying to be sensible savers when we married and went without big fancy dresses and venues. We were so grown up! Anyway, it seems that if you renew your vows you’re also entitled to have a second honeymoon too. And a long time ago now I was bridesmaid for a bride who had her heart set on one of the idyllic Mediterranean Islands for her honeymoon and ended up making do with Jersey. She did actually love Jersey, but has decided it’s now time for that Mediterranean dream… so we have been poring over photos of gloriously sun drenched islands for the past week, and it’s time to see what her options really are! 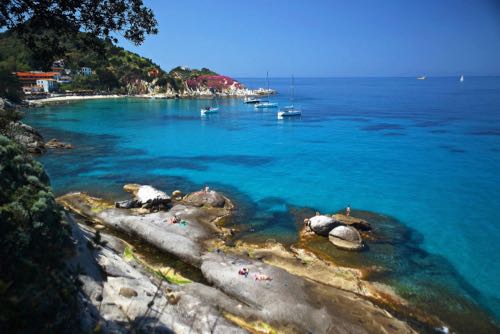 I’m pretty certain that almost all visitors to Elba wonder what Napoleon was moaning about. Naturally he was miffed about being exiled, but if he had looked around properly he would have realised he had pretty much been exiled to paradise. There’s sunshine, warm, clear seas, meadows of wildflowers, around 150 beaches, and plenty of Tuscan-style hilltop towns to charm. 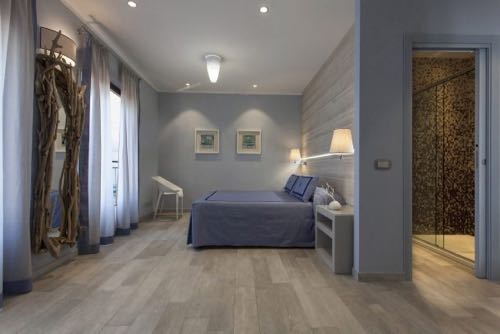 Where to Stay? The Boutique Hotel Ilio is a laid back, pleasingly minimal hotel on the quiet north western corner of Elba. Most importantly this hotel was built on top of the owner/manager’s grandfather’s wine cellar, where traditional red and white Elban wines are still produced. There are just 20 rooms, all individually decorated in relaxing but confident colours, and arranged in lush gardens. As well as knowing his wine, the owner also knows his food and has produced a guide to island eating – and the hotel is within walking distance of a number of excellent eateries. It’s also affordable, with rooms starting from just €70 B&B per night.
Practical Details: Elba is easier to get to in the warmer months, when you can fly in from Florence, Zurich, Milan and Pisa. During the cooler months you’ll need to fly to Pisa, then and take the train to Piombino, and finally hop on the ferry to Elba. It sounds fussy but it’s a nice trip. Elba’s climate is very pleasant. It’s sunny and warm in summer, but with maximum daily averages at 27°C during July and August, it’s rarely uncomfortable. 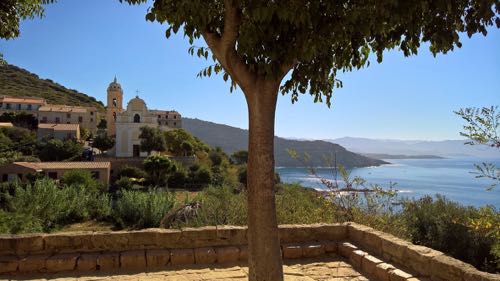 Once Tuscan, now French – which you can see in the cuisine and the architecture – this Mediterranean island’s geological diversity makes it a bit like a mini continent. If you circuit Corsica – some 900kms on tiny, twisting, very scenic roads – you’ll see the spiked peaks inland, the rugged cliffs, beautiful aquamarine bays and the smooth stretches of beach. Alongside these you’ll also find the glitzy towns, French Riviera style, while up in the hills are the tiny, picturesque villages. 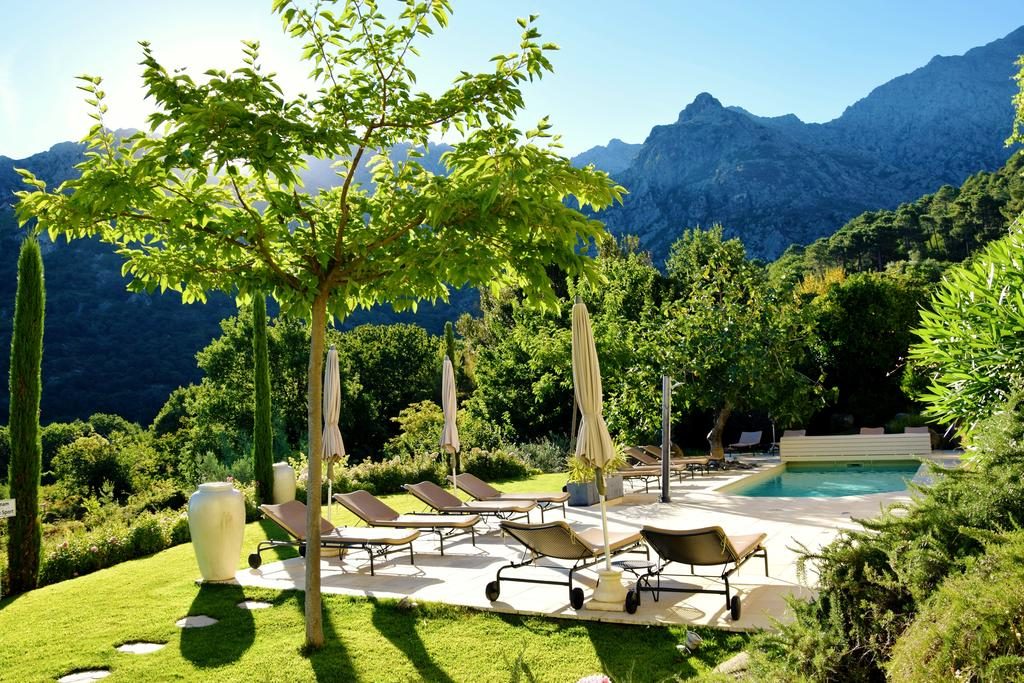 Where to Stay? If you want white sand stay on the southern coast, but slightly off the beaten track you could also try the Cas’Anna Lidia, which has ten stylish, contemporary rooms, and a really enticing location surrounded by majestic mountain vistas. The decor is simple, the pool has incredible views and the breakfasts indulge. Plus rooms start from around €129 per nightt.
Practical Details: For such a small place, Corsica offers a range of airport choices. You can fly to Calvi, Bastia, Figari Sud Corse or Ajaccio – all of these are pretty small yet perfectly functional airports. Alternatively there are regular ferry services from Marseilles and Nice in France, and Genoa and Livorno in Italy. Weather-wise, Corsica is similar to Elba with plenty of sunshine and average maximum temperatures not heading upwards of 27°C even during July and August. 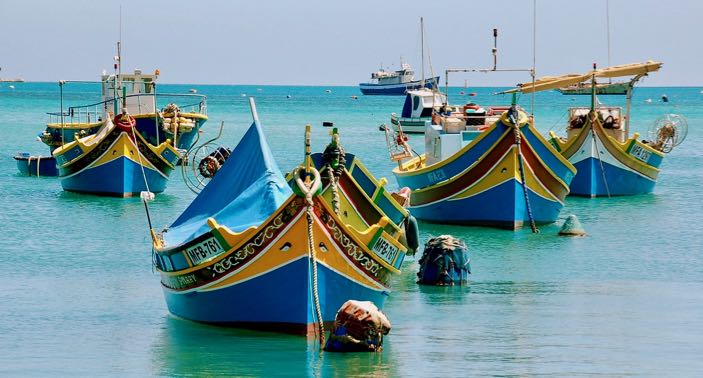 Historic, romantic and totally unique, Malta promises warmth, sunshine and tales which will heat your blood, making it the perfect place to hop to in the cooler months. It’s a small island, but there’s a lot to see, even if you only want to tick a cursory number of boxes. The rocky coastline with its gin-clear waters is a surprising pleasure and the Maltese make it easy to see great swathes of coast as they are linked by well marked walking trails. Malta’s underwater views also come highly recommended by those in the know. The prehistoric sites should not be overlooked, just because the religious ones are steeped in so much fantastic storytelling… 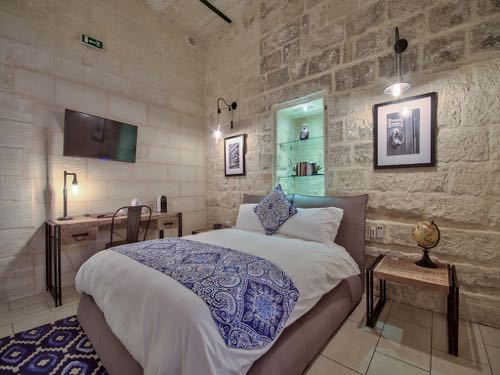 Where to Stay? The name lacks a certain something, but Julesy’s BnB, which is just across the harbour from Valletta in Cospicua, is both charming and luxurious. There are just four suites, sympathetically decorated to bring out the beautiful stone of this converted house, and you can expect a very personalised service from your Australian-born hosts, including gourmet breakfast, an impressively stocked wine cellar and a glorious roof terrace – where breakfast is served. Rooms start from €169 per night including breakfast.
Practical Details: You can fly direct to Malta’s International Airport from London, Edinburgh and a handful of other UK airports – with more options during the warmer months. It only takes about four hours, and there you are: in one one of the sunniest islands in the Med., boasting around 300 sunny days a year. Malta is known for being mild in winter – the maximum daily averages don’t drop below 16°C, but in July and August you can expect maximums of 32°C. September, October, and even November, which is still in the low 20s, are all good times to visit if you don’t like too much heat. 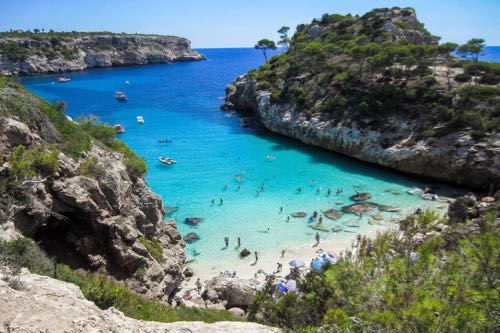 Don’t be put off by this island’s popularity: Mallorca offers much more than sun, sea and sand – yes, it has those three ‘s’s in spades, but it’s also blessed with some of the Mediterranean’s most beautiful natural scenery, a spectacular coastline, and remote-feeling mountains dotted with hill towns rich in character and views. Some of the best places to stay on Mallorca are the lovingly and painstakingly renovated farmsteads, manor houses, palaces and estates, and it’s in these sorts of properties you can see the local appreciation for the island’s traditions and heritage. 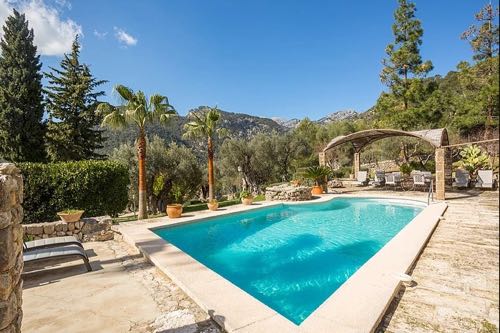 Where to Stay? Finca Es Castell is a beautifully converted 15th century farmhouse, and one of the oldest fincas on the island. It has buckets of rustic charm and a peaceful, location in the foothills of the Tramuntana mountains with wonderful views. There are 12 rooms in this small, elegant and informal country retreat, plus a pool-with-a-view, cobbled patios, ancient vines and whitewashed walls. The food is also excellent, which is probably not surprising seeing as the finca is on 750 acres of working farm – and it has its own olive press, worn smooth from centuries of use. This is one of the Mediterranean’s true hidden gems. Rooms start from €165 per night B&B.
Practical Details: Palma is Spain’s third largest airport, so well linked to UK airports. Alternatively you’re about four hours from mainland Spain by ferry. Mallorca’s climate is typically Mediterranean, with hot, dry summers and mild winters. Its central mountains mean there’s some variation across the island – mostly dependant on how much wind you’re getting – but you can pretty much expect sunshine and 19°C+ between April and November. 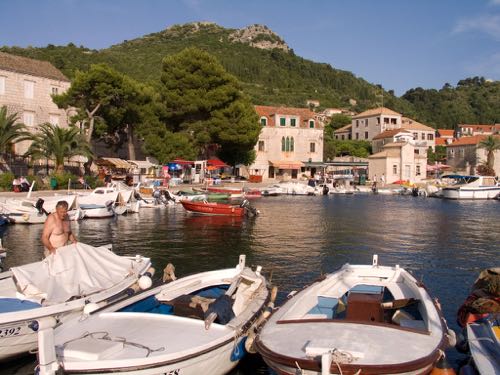 The southerly part of the Dalmatian Coast is where you’ll see palm trees and olive groves along the ribbon of blue ocean, but the grey cliffs and peaks are still right behind the coast. This is also where you’ll find Dubrovnik. A favourite of famous aesthete Elizabeth Taylor, Dubrovnik’s sheltered, emerald harbour, 13th century walled town and its Stradun, said to be one of the world’s most beautiful main streets, are endlessly enchanting. It sounds over the top, but you’ll see… Island hop around here and you’ll enjoy sunshine and marvellous views, plus good food served on picturesque terraces overlooking the ocean. 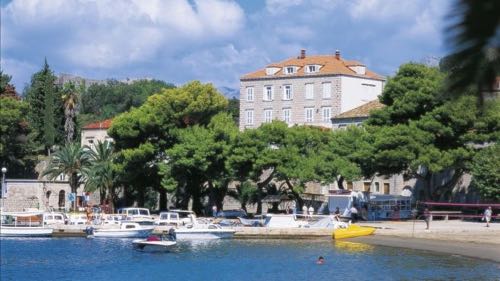 Where to Stay? The Villa Vilina is a beautiful stone house on Lopud, one of the Elafiti Islands and just a few miles to the west of Dubrovnik. As well as a near perfect location right on the water, the villa has beautiful views and 15 simple, traditional rooms with private balconies. There’s also a pool, a roof terrace and an excellent restaurant. Romantic, peaceful and totally idyllic. Rooms start from around €135 per night including breakfast.
Practical Details: Lopud is easily reached from Dubrovnik, there are ferries every day, and it takes about an hour to cross the water. And Dubrovnik Airport is fairly easily reached from the UK, with flights available from most major airports. Summers here are beautiful, but you do need to book your accommodation in advance – but by travelling in September or October you’ll be missing the cruise ships and it’ll be much quieter, and maximum daily average temperatures are still 25°C.

Other great value recommendations from our Hotel Guru experts here