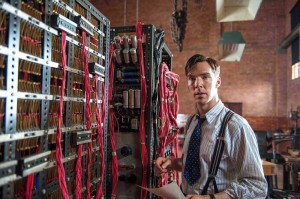 I love going to the cinema but recently I have been to a couple of films, Effie Gray and Mr. Turner, during which I fell asleep as the pace was so slow as to leave me nodding off, however I had high hopes for this film, The Imitation Game. There was a bit of a buzz about it in Henley-on-Thames as much of it was filmed locally at the Sue Ryder Home and I gather Benedict Cumberbatch was a big hit with the patients as he visited many of them.

I was not disappointed as the story of Alan Turing breaking the Enigma code was brilliantly told in this tragic yet celebratory story. Benedict Cumberbatch was mesmerising as Alan Turing and he played the part so sympathetically with moments of unexpected humour. I still find Keira Knightley grates with me despite her obvious beauty which consequently made it hard (for me) to be convinced of her intelligence as the Cambridge Maths graduate, Joan Clarke, who joins Turing’s team because of her crossword solving skills, however her character is a likeable foil to the impenetrable Turing. 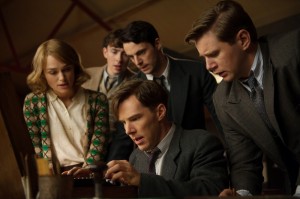 Granted a posthumous royal pardon for his “gross indecency” conviction only last year, the mathematician and AI pioneer changed the course of the war only to suffer the indignities of arrest and “chemical castration”, dying in 1954 having apparently taken a bite from a poisoned apple.

My only question, which the film highlighted, is that we clearly owe so much to this man and his team and yet I cannot understand why they have not been given any honour, posthumous or otherwise? Nevertheless this is a great film for a wet Sunday afternoon or, for that matter any day, so go and see it and do NOT read any of the film critic reviews which have been less than enthusiastic in many cases! Last week the film won four awards at the Hollywood Film awards, including best actor for Benedict Cumberbatch!

p.s. Grace here. Like Annabel I thought this was a very moving film and definitely a story that should be told. It is appalling that Alan Turing was treated as he was, as apparently he saved over 14 million lives in World War II by breaking the supposedly unbreakable Enigma code PLUS he invented the computer. Just think what he could have gone on to do if he had been treated with the respect he so obviously deserved.  BC is a tour de force (although his speciality seems to be playing people with Asperger’s – Sherlock, Julian Assange and now Turing) and is completely mesmerising. I thought it a shame that the homosexual issue was skirted around and that his later life was given just one or two scenes – but that’s not really important. What is important, is that you all go and see this film!