In her wake by Amanda Jennings / CountryWives 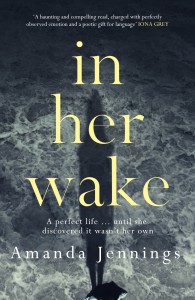 I am suffering from book-withdrawal symptoms. A strange sort of absence that afflicts you once a book you have consumed in several breathless sittings finally gives up all of its secrets. I have just finished reading Amanda Jennings’ In Her Wake, a psychological thriller full of emotional depth and intelligence. The book follows its first-person narrator, Bella, on a literal journey to discover her true identity, amidst a maelstrom of grief and family trauma.

Without wishing to give too much away, Amanda uses flashbacks, dreamlike sequences and a touch of the supernatural to weave her story together. In some ways, this feels like a ‘first novel’ into which the writer has poured her heart and soul, and yet at the same time it is the work of someone who has honed her craft (this is actually Amanda’s third, published novel).

Against the evocative landscape of Cornwall, Bella’s identity crisis is exposed through her relationships with other characters in the book and also via the interplay between her present life and the shadowy events lurking in her memory. Her interaction with an imaginary friend, Tori, becomes a kind of conceit to dramatise her mental turmoil. Rather than being a tedious character study, however, the novel unfolds like an addictive thriller, with one final twist revealed at the end.

Amanda – who I should disclose is a friend of mine – admits to an obsession with family bonds. Like many novelists – M. L. Stedman, Alice Sebold and Maggie O’Farrell to name but a few – she is concerned with the theme of losing a child. “I had no idea what loving a child with all your body, heart and soul would feel like,” muses Bella at one point, “how encompassing it is, how you subsequently regard everything else in relation to that child.” The potency of this parent-child bond forms the axis of the book and inspires some of the more moving passages.

In Her Wake is also about the power that one person can have over another and the smothering effects of such control. Reflecting on her mother Elaine at the beginning of the book, Bella says: “So I did everything I could to keep her happy. And Henry did the same. Her emotions were the epicentre of our lives.” Again and again, Bella fights to throw off the influences of people in her past in order to unearth her own personality.

At times, the plot feels a little over-engineered – there’s a lot to fit in – and the mechanics of the story occasionally rumble beneath the narrative. On the whole, however, this novel is a tour de force and a coming of age not only for the main character, but also for Amanda herself as a writer.