In search of some winter sun / CountryWives

I’ve just had the worst holiday in all my life. A cyclone hit me. Well not me personally. It actually hit the whole of Southern India but it affected me. In fact it affected me so much I didn’t once put on my sunglasses, I haven’t got a suntan and I did not swim in the sea or the very gorgeous pool at the very expensive hotel!

What a selfish woman you must be thinking. What about all those people waist high in water in Chennai? Much to my surprise, I didn’t hear one single person complain. All the locals seemed to say was “thank God we have got water – the crops will grow and it’s lovely and cool.” They even walked around in sweaters. The children got a week off school, so they were happy and the municipal local government did what they do best – they complained and moaned in “the Hindu” and put all the blame onto everyone else. Mr Modi said he would help… but I think that meant only the rich people.

I knew it was going to be a disaster from the very beginning. You get a nose about these things. We had only just taken off when the captain came on the intercom: “Would the chief stewardess please come to the cockpit immediately.” A million things run through your head. Nothing more was said but we didn’t seem to be climbing. About 20 mins later it was the Captain again “I’m very sorry ladies and gentlemen but we have engine trouble and we will have to return to Heathrow.” “Unfortunately” he added “we also have to jettison our fuel so it will take a bit of time. As soon as we get back on the ground you will be advised as to what is going to happen.”  The plane went very quiet while we circled around Clacton and Margate spewing out what ever the expensive fuel is that goes into jet engines. Finally we were ready to land. No one was allowed a drink and we all had to stay strapped in. We wobbled down towards the ground and had a fairly hairy landing. The captain was given a round of applause and he certainly deserved it. At least he kept the plane on the runway. They must have been expecting trouble as we were miles away from the terminal and then had to wait for buses to collect us. By this time we had wasted three hours. Five hours later we were finally found another plane and new crew!

Off we went again. We got to the end of the runway and the captain (a new one this time) said “Ladies and gentlemen…” – there was a groan – “I’m afraid we have a technical difficulty and will have to go back to the terminal.” You could see the faces of the smokers go even greener. It’s one of the few vices I don’t have thank goodness but even I was beginning to feel sorry for them. But worse still for the poor mothers with toddlers and tiny babies – they had already had ten hours of hanging around and we hadn’t even started our journey.

Finally after 40 minutes of maintenance we were off again and this time went up in the air without a problem. I think we all sighed with relief. The journey from then on was uneventful, except there are new kinds of loos on some of the BA planes…. be warned. Instead of opening inwards, they slide and if you pull them they stick – as my travelling companion found out! 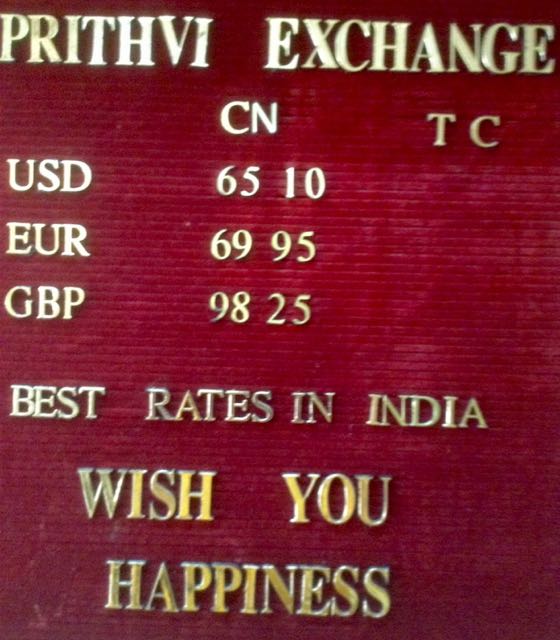 A smiling chauffeur was waiting for us at Chennai to whisk us to our five star hotel. What we hadn’t realised was that it had been raining solidly for a week so the roads were all flooded. The bright colours of India don’t look quite so inviting when they are soggy. In fact the water, which seemed to cover everything, was a muddy greenish grey. The brand new motorway out of Chennai was not built with floods in mind and so a mixed spectacle greeted us. Poor women trying to balance their whole families in their arms, men trying to push heavily laden bikes through the water, masses of mopeds defeated by the water standing conked out by the side of the road. So this was India.

Our chauffeur drove slowly and carefully through the floods. We tried to hide our disappointment about the weather.”Is this very unusual?” I asked ,”Very very unusual but we need it. ” came the reply.
“I came for the sun” I said.
“Oh dear” said our smiley chauffeur ” No sun for fourteen days “…and he was proved right. 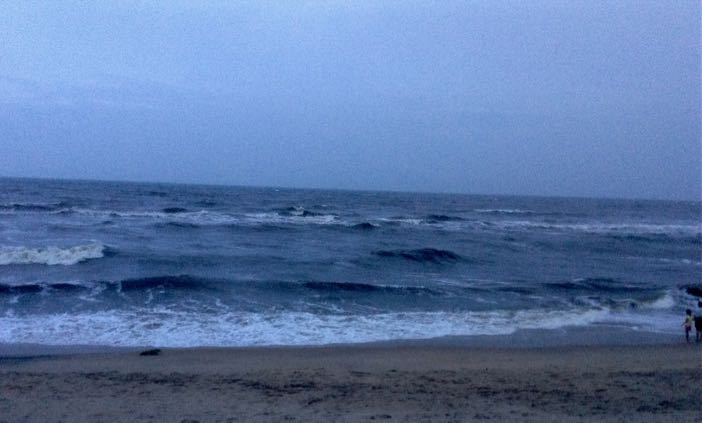 The hotel was lovely and so it should be. We had booked through Audley Travel who have a reputation for high end, luxury travel. Fishermans Cove is situated in glorious gardens and has little cottages dotted around, its own beach and a drop dead swimming pool with swim up bar. In normal circumstances heavenly. However there was such a howling gale and torrents of water that we could not get anywhere near the beach. The swimming pool looked cold and uninviting and if we did get wet there was no way of being able to dry anything. The open air shower was nice – and you didn’t even have to turn the tap on!

Our cottage flooded. Water seeped in under the bathroom door. The key didn’t work – management said it was the wet. And they had messed up the booking, giving us a huge double bed instead of two singles. I pounded back to reception to see if I could alter the bed situation. No, there were no twin beds; the best they could offer was a “put up bed.” If you’ve ever slept in a put up bed, especially one that hasn’t been used much – DON’T. They are very uncomfortable. In repose they fold up so naturally the mattress has a fold bump in it which either rams in the small of your back or, if you lie on your front, you are stuck with your bum in the air! Neither gracious or comfortable. 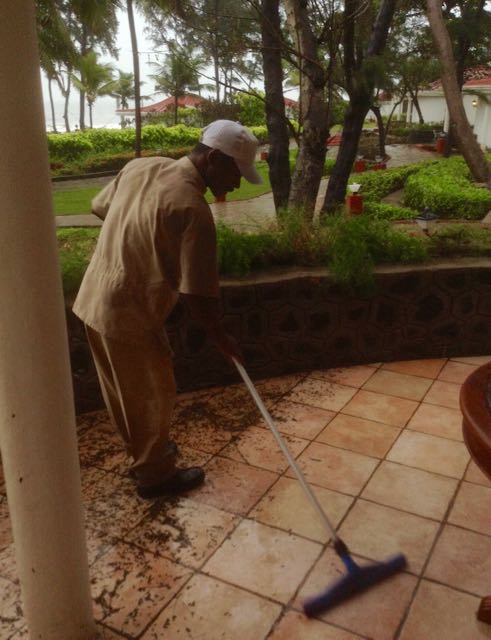 Fishermans Cove is designed for sunshine. It has three restaurants, one of which is outside by the beach. I’m sure if the weather is good it is deeply romantic – but sitting there under a vast umbrella with the waves making so much noise you couldn’t hear anything else was no fun. We tried to be British and not let the weather affect us and went to a temple. The sight on the way of the poor wet cows in the middle of the road will always be with me… and cows on the beach was another sight shan’t forget. But paddling round a temple in eight inches of water in bare feet while wondering what you are walking on is not appetising.

The itinerary for our trip was a week by the beach and then plenty of sightseeing in the next two places. It became glaringly clear – especially as in this technical age we can now see what weather is going to be like  with some accuracy – that there was little point in staying where we were. We could do nothing but read, build an ark or eat! Thank goodness my friend who I was travelling with took the bull by the horns and suggested we come home. I leaped at it with alacrity. I was on to Audley Travel within seconds and hey presto they had us home in two days. I have never been so pleased to see London! And guess what? The sun was shining!

Of course Saga says it was an act of God, so no money back. Audley did try and got a bit back and, with regards to British Airways, I think they are pretty busy with security…. and I don’t mind that. It won’t stop me travelling but I shall be a little more careful where I visit – perhaps I will go and see the tigers next…

Christmas is creeping up, two ex husbands, two mastiffs, two sons and two daughter in laws and five grandchildren … and I don’t have to do any of the cooking! It’s good being a granny!

A very Happy Christmas to you all….
BPG