The weather was stormy when I set off down the west side of the Mull of Kintyre, and was forecast to get worse. I planned to go down the west side to Campbelltown and then swiftly up the east side to Claonaig because, I had been warned, the road up the east side was narrow and winding and I didn’t fancy negotiating it in a monsoon. I had a ferry booked from Claonaig to Arran the following day and was to meet my friend, Cathy Agnew who lives near New Galloway, the day after that. 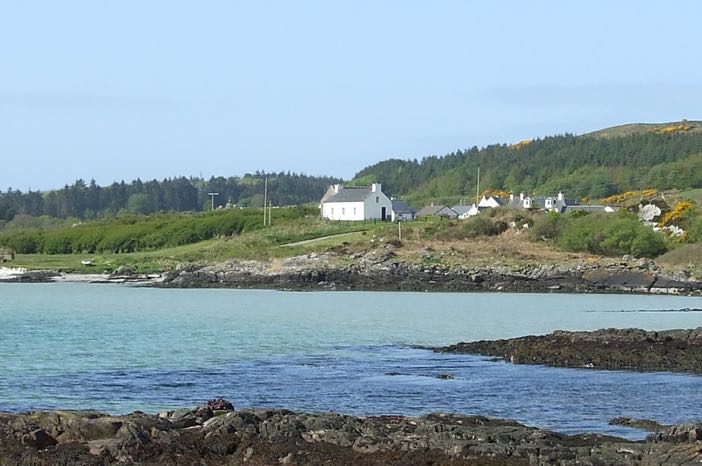 First I wanted to visit the Gigha (off the west side of the Mull) an island, seven miles long, which has holiday houses and a hotel, a golf course and the renowned Achamore Gardens. I dropped into the ferry terminal at Tayinloan to check the times on my way to the campsite. The wind was whipping off the sea and it all looked very unfriendly, but I just hoped it would improve by the time I crossed at 9am the following day.

The nearby Point Sands Park campsite, was full of families playing football and children riding bikes, despite the worsening weather. When night fell Baa was swaying in the wind and the tents in the middle of the park were straining at their ropes, trying to break free. But by morning the storm had passed and the tents had not disappeared, leaving campers lying in their sleeping bags looking straight up to the sky, as I had predicted. I did my campsite duties (emptying and filling tanks) and drove to the ferry car park to cross to Gigha as a foot passenger. 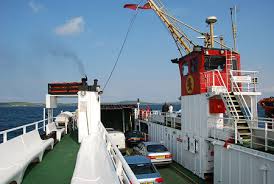 It only takes 10 minutes and a couple who were going over in their Jaguar to play golf gave me a lift from the harbour up to the village shop where the bikes are hired out. Mine was a Claud Butler in good condition, handlebars not quite straight but good hard tyres, and I set off for the southern tip of the island. There were very few cars about and the sun had come out. I often wished I had a bike rack on the back of Baa, and could’ve pedalled about to keep fit – but I never got beyond wishing. In the five months I spent travelling the coast I spent such a lot of time sitting behind the wheel and, though I walked each day, sometimes it wasn’t far and I certainly wasn’t achieving anything like 10,000 steps a day!

Achamore Gardens are largely woodland, with some wonderful trees and rhododendrons, and a large walled garden with unusual plants that love the gulf-stream climate and the shelter of the warm, brick walls. The island was bought by Sir James Horlick in 1944 in order to develop his collection of rare plants and he planted the large gardens around the Victorian Achamore House which brought many visitors to the island in the 60s and 70s, when the island was sold again. 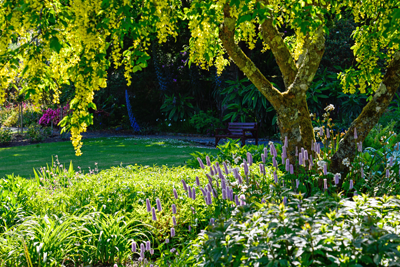 When I visited there had recently been a new head gardener who was concentrating on the woodland – well he needed to, as there were lots of fallen trees and the whole thing looked a bit overwhelmed. Now that the Gardens are owned by the islanders there are only 2 gardeners and 2 volunteers working there and the walled garden was not looking as sharp as a walled garden should look. I’d love to go back again and see how it looks now.

I rode back past the shop to the other end of the island and past the golf course. I got up to the twin beaches at the northern tip of the island but didn’t feel I had time to walk down to them as the ferry was due at 12.30 and I was nervous about the weather – storms were due from 3pm. So I pedalled back to the shop to return the bike and met the owners, a young couple with a baby, Martha, and they had really good groceries to buy and tea and coffee and freshly made rolls. Obviously a classy kind of punter rents a house on Gigha, The rolls are made fresh (crab for me) and the man said he was just popping out the back to get some leaves to go in mine and that I wasn’t to worry, I would easily catch the ferry. I didn’t worry. He soon reappeared and said, “There you go, crab with a little mayonnaise and some fresh rocket, coriander and sorrel!” Mmmmmh! I was so impressed: the bread – all the ingredients –were totally delicious. I decided as I ate my lunch on the deck of the ferry going back to the mainland, that it really was the most perfect roll I had ever eaten.