I've been lucky enough to "flop and drop" / CountryWives

I have been lucky enough to recently escape to a week of sunshine in Sharm el Sheikh with BFF (best female friend). It was fabulous – even the day it hit 36 degrees with absolutely no breeze! We made a pact we were not allowed to utter the words “it’s almost too hot isn’t it?” knowing it was a chilly 12 degrees back home. My idea of utter heaven. A “flop and drop” holiday – a phrase we picked up from another guest.

We would literally flop by the pool every day and pick up our books! We are both similar like this so it wasn’t as if the other was dying for a conversation. However there was a moment when BFF was getting to a juicy chapter in her novel and I was listening to my iPod and I dropped an ice cube on her back while singing loudly “Do you wanna build a snowman?” Her expletives cannot be printed but, in my defence, it probably was the 36 degree heat and I may have been suffering from mild sunstroke (or too many G & T’s !!!)

My only miserable moment came when BFF was merrily chatting and texting her boyfriend, her mum, her daughter, her son… and I would sit there like Billy No Mates! I texted eldest son a few times who responded with details of his job, his love life, the weather and usual chit chat, but my youngest?? “Don’t text it costs too much” closely followed by “Will you be buying me anything?” One sad day I just wanted to chat and tried to call him “Are you insane!!! Have you any idea how much it will cost to call?” Now this wouldn’t be a problem except that EH still controls and pays for my phone so it really isn’t anything to do with my son; but because he lives with his dad he comes out with all sorts of crap! He told me he thinks some terms of our divorce were unfair (for his dad!). I told him that the terms of our divorce are between his father and I but that doesn’t stop him sticking his oar in – likewise with my damn phone!

Anyway on my return I contact EH to say I hope my phone bill wasn’t too excessive and that I tried to use wi-fi whenever I could. However wi-fi in Egypt is pretty elusive. He didn’t respond 🙁  I then sent another message asking to have control back of my phone, my contract and my bill. Still no response – which is infuriating. I think he still secretly likes that control. I know he can check who I contact. When we first split up he knew so much about who I was seeing I thought he was stalking me! At least when I go away again I won’t have that hanging over my head again – assuming EH answers my messages.

BPG and I used to be neighbours and still meet up regularly. We were both helping out on Polling Day – me because I was in my professional volunteering capacity and BPG because she is one of the most kind hearted people I know. As a thank you for our efforts we were invited to a champagne reception on the Saturday after the election. Two glasses of champagne on an empty stomach later, BPG and I go off for a leisurely long lunch (with more wine). At 4pm we decide to go to the cinema so I nip home first to walk my dog (and clear my head) and BPG goes home and falls asleep! We did make it to the cinema and how we both managed to stay awake was a minor miracle. But it was Spooks and it is quite loud and fast paced so that helped. 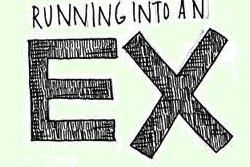 When we came out into the fading light there was a car trying to park with a personalised plate which we instantly recognised as belonging to friends of my EH and I. A couple we used to hang out with regularly who now socialise with EH and Fluff all the time. I ask BPG how many are in the car – convinced it could be an awkward encounter. It was actually farcical – I was wearing bright pink, BPG has a custard yellow car and we both have sunglasses on in the gloom!! I dart behind a Waitrose van while she tries to get closer to their car to see if EH and Fluff are in there. But no, just two of them get out of the car. As I creep out from behind my hiding place I can see I’ve been spotted – AWKWARD! I say a clumsy hello and BPG and I race back to her car in fits of giggles like naughty children. It was fun!

And the Gorgeous Man? I’ve seen him a couple more times. Yes, I still get goosebumps and butterflies but he does have a girlfriend. So I think my lightning strike may end up only causing me pain!

annabelandgracecw
•
Follow
Marks & Spencer are not only great for their clothes, footwear, underwear and food. They also have a great homewares section. This Autumn we are all watching our money but maybe a new throw to keep us warm or some faux flowers as fresh ones are so expensive may just give our homes a bit of an uplift. Annabel & Grace are both wearing clothes, Shoes and scarf all from the new Autumn collection at M&S. . #homewares #yesmarks #marksandspencer @marksandspencer #autumn #interior #cushions #homedecor #interiordesign #home #decor #interiors #interiorstyling #homedecoration #marksandspencerhome #marksandspencerme
View on Instagram |
2/9

annabelandgracecw
•
Follow
Today, 23rd September, is officially the end of Summer 😢 But as you can see we are not getting out all our drab clothes. We are keeping summer going with our clothes. And of course layering with these Claire Cable jumpers £59 and Georgina Gilets £96 (use code A&G10 for 10% off the gilet until tomorrow only) from Artichoke Collection. We may be wearing our gilets inside this winter with the increase in energy prices! . @artichokegirls jumpers & gilets @callashoesuk - Grace’s red shoes @vivaia_official - Annabel’s hot pink shoes . #endofsummer #layeringclothing #winterjumper #winterwoolies #seasonchange #annabelandgrace #annabelandgracemagazine #onlinemagazineforwomen #lifestylemagazine #lifestyle #autumn #autumndressing #lovewhatwewear
View on Instagram |
3/9

annabelandgracecw
•
Follow
Just a few beauty products that have crept into my bathroom cabinet. All of them do what it says on the ‘tin’. Obviously they are not miracle creams or lotions but they all help and they make me feel I am doing my best for my skin and hair!! Just taking that time out to pamper oneself is so important and if you feel good then you will look good. . @praibeautyuk Ageless Upper Arm Creme @muradskincareuk Environmental Shield @erborian_uk CC Dull Correct & BB Eye @baebrow eyebrow serum @maybelline_makeupuk Curl Bounce Mascara @mvanclarke 3 more inches silver blonde shampoo . #skincare #beautyproducts #mascara #haircare #wellbeing #makeupover50 #womenover50 #womenover60 #womenover70 #womenintheir60s #lifestylemagazine #onlinemagazineforwomen #onlinemagazineforwomeneverywhere #timeofourlives #timetotakecareofyourself
View on Instagram |
4/9

annabelandgracecw
•
Follow
Why should we all keep making an effort with how we dress on a daily basis? Surely as women over 50 we have become invisible women. NOT SO according to our guest fashion writer Maggie Cox (aged 81 yrs) and we agree. Read Maggie’s article: Style for Women over 50 - Reasons we shouldn’t give up. (Link in bio) Grace is wearing blouse from @winserlondon (many seasons ago) Jeans from @marksandspencer Jewellery from charity shop. Annabel is wearing t-shirt from @patraselections jeans from @me_andem jewellery from @analuisany . #womenover50 #womenintheir60s #womenover60 #styleforwomen #olderwomen #fashionforolderwomen #lifebeginsat50 #onlinemagazineforwomen #lifestylemagazine @nevertoolatetolookgreat
View on Instagram |
5/9

annabelandgracecw
•
Follow
A friend of A&G, Libbla Kelly, queued to see Her Majesty The Queen lying in state. She shares her experience and the incredible feelings she has been left with in the latest article on our website. Have a read. Link on our website. . #queenelizabeth #lyinginstate #queenelizabethii #queensfuneral #hermajesty #payinghomage #womensupportingwomen #sisterhood #annabelandgracemagazine #pilgrimage
View on Instagram |
6/9

annabelandgracecw
•
Follow
Our header post this week from Grace is ‘Internet Dating for the Over 50’: Grace goes on a manhunt. See how she got on with this minefield of modern dating. Annabel & Grace are both wearing knitwear from the new collection at @silverpinkcompany - delicious colours and styles! . #onlinedating #datingforover60s #datingforwomen #loveinlateryears #grace #annabelandgrace #annabelandgracemagazine #womenintheir60s #womenover60 #womenover50 #timeofourlives #lifebeginsat50 ##womenover70
View on Instagram |
7/9

annabelandgracecw
•
Follow
Autumn is coming so we have been having a try on of some of the knitwear from @silverpinkcompany and @artichokegirls Have a look at Grace’s latest fashion post - What we wore last week. (Link in bio) And we have a 10% discount code for The Artichoke Georgina Gilet - A&G10 (valid until 24th Sept) We hate saying goodbye to summer but are determined to keep sunshine going with lots of colour in our wardrobes. We may need warm knitwear, gilets and lots of layers if we are to keep warm since we won’t be turning up the dial on our heating thermostat! . #winterknitwear #autumnfashion #discount #colourfulknitwear #timeofourlives #fashionstyle #stylishclothes #womenintheir60s #womenover50 #womenover60 #olderwomen #annabelandgracemagazine #annabelandgracefriends #annabelandgrace #onlinemagazineforwomen #lifestylemagazine
View on Instagram |
8/9

annabelandgracecw
•
Follow
You know we discuss literally everything - isn’t that what good friends are for? This week it is nose hair and Grace educates Annabel about stragglers! Growing older is such a minefield of hair growing in all the wrong places! Read Grace’s post dealing with nose hair on our website now . #nosehair #beautytips #womenover50 #womenover60 #womenover70 #timeofourlives #facialhair #annabelandgrace #annabelandgracemagazine #onlinemagazineforwomen #lifestylemagazine #chat #womentalk
View on Instagram |
9/9
View on Instagram
Tweets by @Countrywives