Am on a mission to save money and decided to use up everything in my freezer before re-stocking it. That’s the reason I went in search of a recipe to use up some stewing beef and have adapted this easy recipe on the Olive Magazine website for Jamaican Pepperpot Beef Stew. Ginger, chilli and allspice spice up the tender beef and sweet potato for a cockle warming one-pot dish. Not sure about anyone else but we are about to switch the central heating back on as the evenings are becoming a bit chilly…

How to prepare
Heat a large casserole and fry the beef in the lard until browned. Add the onion and cook until soft then tip in the ginger, garlic and chilli and cook for a couple of minutes. Add the thyme, allspice, cinnamon, stock and coconut milk. Bring up to a gentle simmer, cover then cook for 1½ hours using a medium heat (about 170 degrees F).

Add the sweet potato and cook uncovered until just tender, about 20 minutes. Stir in the spinach and simmer for a good 5 minutes. Serve in warmed bowls. 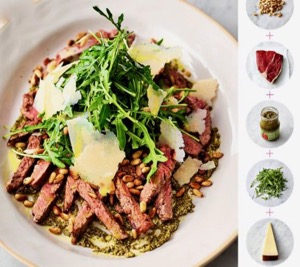 Or you could try this easy beef recipe from Jamie O. – Italian Seared Beef