This is the true story of Kathleen (Kick) Kennedy, JFK’s forgotten sister and the heir to Chatsworth by Paula Byrne, a renowned biographer. 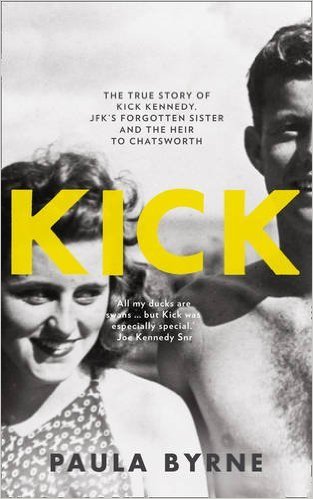 It is not often that I am so taken with a book that I do not want it to end but this was one of those times. We all think we know so much about the Kennedy’s though it is probably mostly about JFK who was the most charismatic of President’s and because he died so tragically young he remains an icon in our memories. The Kennedy’s have always seemed to be cursed, Joe Jr. died at the end of WWII, whilst Jack and Bobby were both assassinated in the 1960’s.  The next generation seemed to fair no better. However I had not heard much about Joe and Rose’s second daughter, baptised Kathleen, but always known as ‘Kick’ by all but her mother.

By all accounts she was Joe’s favourite and was the female version of Jack. She was fun and feisty and whilst not a classic beauty she had men falling at her feet both in the US and England. She sailed to England in 1938, with the rest of her family, when her father was made Ambassador to the UK. She and her elder sister, Rosemary, were presented at court as debutantes and so began their integration into British society. The Kennedy family, Joe, Rose and their nine children were a breath of fresh air and the press could not get enough of them. Kick was described as ‘the best thing America ever sent us’.

She was wined, dined and courted by the aristocracy, politicians, writers and artists because she was so unusual compared to English women of that time. She was quick-witted, she was interested in politics and could hold her own – characteristics that were encouraged in the Kennedy family.

This book is so totally fascinating as it covers such an important time in history, seen through the eyes of one young woman. It is meticulously researched and gives an insight into the Kennedy clan quoting letters and diaries that the author had access to via archives, both in the US and the UK. It covers a period of time including WWII when life changed so much in England and the class system died. It also gives an insight into one of the leading aristocratic families, the Devonshires, the chatelaines of Chatsworth, as Kick married the son and heir, William (Billy) Cavendish, Marquis of Hartington.

It is a story of tragedy, of an unbelievably strong love that had to conquer all including the objections from her family, his family, the Pope and King George VI, of a Catholic girl marrying a Protestant heir to a dukedom. Kick’s struggle with her strong religious beliefs, instilled by her mother, shows how much she battled with the dilemma of love v. religion. In the end love won but she paid a price as it divided her family but she never gave up convincing each and every one of them that Billy was the right man for her and a very good, honourable and kind man.

The Devonshires were won over by her charm and the joy she brought to Billy and to all who met her. Billy was killed in the last months of the war and Kick’s heart was broken. In 1948 she too died, suddenly and tragically, in a private plane crash on her way to Paris to meet with her father with her new fiancé. Peter Wentworth-Fitzwilliam, 8th Earl Fitzwilliam.

She is buried at Chatsworth and her gravestone reads:

‘Joy she gave joy she found’

JFK made a private visit to her grave in June 1963, only months before his own tragic death. It was to be the only time he visited England during his Presidency.

This book gives equal measures of joy and tears and reflects the times that Kick lived in.  It brings to life, on each and every page, her effervescence, energy and vigour. She was an enchanting, fascinating and good person and rightly deserves a place in history.

I have not enjoyed a book so much for a long time and if you are interested in this period of history or the Kennedy’s then do read this book as it is a truly entertaining and educational read.