Koh Lipe: paradise with wifi and no cockroaches / CountryWives

I used to say that I needed three things in life – hot water, a flushing loo and a comfortable bed. Having just successfully stayed on Koh Lipe, in a wooden hut half way up a cliff for the last four days I can now report that these minimum requirements have been modified. 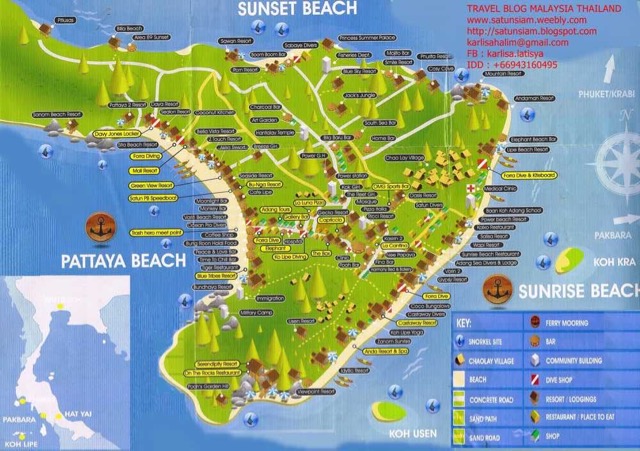 My sea view cottage, so it is described, is painted a happy shade of bright turquoise inside with curious regency moulded ceiling tiles and a definite tilt to the whole thing, making me feel as though I am permanently at sea. The exterior, where not bare wood panelling, is a virulent green but the real joy is the balcony which is where I am typing now and which really does look over the sea and the little yachts bobbing up and down on the tide.

There is a sprung mattress on the floor, I know it’s sprung because I can feel every one of them as I crawl under the powder blue mosquito net every night. There is a bathroom and that is where two of my original minimum requirements were not met. The loo is so close to the floor as to have your knees up near your ears when sitting on it and there is a sink with a tap which leaks so badly it may as well not be there at all. That and the rudimentary shower and the tap which fills the bucket which flushes the loo, are all cold. Yes you read it right, after four days I now have this down to a fine art. Whilst sitting on the john (which by the way should be called the Thomas after Mr. Crapper who was the plumber who modified the first flushing lavatories) I can reach the tap which fills the bucket so that when all done, the whole lot is flushed away down to the septic tank below. Well one assumes it to be septic but frankly who knows?

I may not have a flushing loo or hot water, or even a particularly comfortable bed, although the latter is better than anticipated, but I do have internet and I don’t have cockroaches – these two being my latest requirements. It just goes to show how ones priorities change.

The real challenge to staying at Seaview cottages on the pretty island of Koh Lipe, is the access. I clambered from the ferry which brought me over from Langkawi on to a local longboat with outrigger and even then got my rolled up jeans wet as it beached on to the white sand. Immigration has its office here and with some strange organised chaos, the girl on the desk managed to return all the passports within a few minutes. 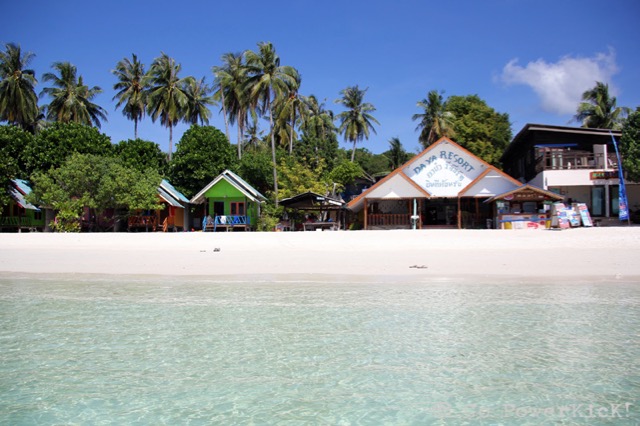 Of course it would have helped if I had had a map of the island. How was I to know that the Daya Resort – resort has a completely different connotation in Asia, where it mostly means a collection of huts – was at the other end of the same beach? Nobody helped and so I found a bike with open side-car which transported me via the very bumpy dirt track from my disembarkation point to my temporary residence. For the grand sum of £1 we bounced over the pot holes, past the inevitable half-finished buildings, piles of construction materials and common or garden garbage and the driver deposited me alongside a pile of cement and timber and pointed laconically to where the ‘resort’ reception was to be found.

‘Reception’ is a canopied desk on the beach which doubles up as the booking site for dive equipment and day trips to even smaller islands where I doubt internet reaches. A smiling androgynous person took my passport and handed me a key and beckoned over a porter to help with my bag. I had mistakenly assumed that one of the gaily painted beach side huts was to be my home for the next few days, but my porter picked up my bag and strode over the sands, me trailing behind him. I was somewhat surprised to see that he clambered over a large boulder with no visible signs of grab rails, but I gamely followed. The final rock negotiated we then scrambled on to a wooden four plank path bordered by rough cut branches serving as balustrades. This wound its way through the rocks and overhanging vegetation for about 200 yards, ending abruptly where the path was replaced by exposed roots worn shiny by hundreds of feet. I spied a cabin and naively thought that I had arrived, only to be confronted by a perpendicular set of 46 steps etched into the side of the cliff, some of them with a rise of over two feet which really required determination. Half way up and gasping I realised that I was not as fit as I like to think. I had no breath to complain and as the bearer spoke no English it would have been futile to do so.

This intrepid walk was the reason that the final destination was so welcome. Had I been shown my hut at sea level I would very likely have turned up my nose and sought alternative lodging. As it was, when the door was un-padlocked and the view from the balcony exposed I was so delighted that my previous torments disappeared in a flash. I am glad to report that at the end of the four day stint, I can march up those steps right to number 30 before I stop for a breath. Another week and I would be running up!

Koh Lipe has three main beaches aptly named Sunset, Sunrise and Pattaya. When I was writing this I wondered why one of the beaches was named after that infamous city where fat balding men go to find petite Thai girls and so I looked it up. Seemingly many Thai towns and places are named after weather conditions and Pattaya means ‘wind blowing from the South West’ which figures.

Still not understanding distances in this island I asked how to get to Sunset beach and was told by three separate gestures that I just walked up there, so I did. Not even the residents 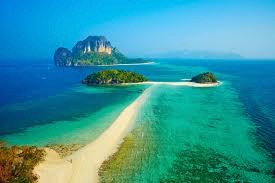 seem to know how big this ‘L ‘shaped island is, but I can tell you that I can walk from Pattaya Beach to Sunset in about 12 minutes, so nothing is far away.

I, and about two hundred assorted souls sat and watched the sun go down, turning crimson and gold and reflecting in the water until the entire vista glimmered like molten metal. That sun has been setting in that position since the world began and like our pagan forbearers it has the same magnetic appeal; it will no doubt be going to sleep in the same spot long after humans have left this planet.

I wasn’t up early enough to test the veracity of Sunrise Beach’s name, but I will take it for granted that the name doesn’t lie and the sunrises are every bit as spectacular as the sunsets. Next time I am here perhaps I will stay on Sunrise and report back.

Pattaya Beach is the most developed and it is an easy stroll through talcum powder sand to visit all the bars and seafood restaurants that border it. The ‘Walking Street’ is ubiquitous to all Thai resort towns. The name gives you a clue as to what to expect. Here is the place to find massages, ATMs, bars, restaurants, the clinic, chemist, 7/11, less salubrious lodgings and so on. Both Sunset and Sunrise beaches are routed off the Walking Street too, so with very little effort you really can walk the island. A stroll from Daya Resort and all the way to the end of Walking Street and back, coupled with a thirty minute swim amongst the coral and the fish is enough daily exercise for any sane person.

On my last night I treated myself to a Mojio at the Corner Bar where happy hour is all night long, the music is good, and the lighting is subdued. I hadn’t been hungry earlier and then I realised that I had left it a bit late as most places close around 10.00pm. As luck would have it, Song Restaurant, right next to Daya Resort is run by a Spanish/Italian couple who loved Koh Lipe so much as tourists they have come back to work here for the season. They kindly prepared me an excellent bruschetta of avocado, tomato and goats cheese and then Francesco showed me a short cut back to the hut through the building site above the beach, where a magnificent restaurant is due to be open in a couple of months. It was less precipitous, but clambering over building materials has its own dangers and I am used to my stairway to heaven now.

I am sorry to be leaving Koh Lipe. My quest for a deserted island with internet is not quite fulfilled as Koh Lipe is the new Bali, and I am not the first tourist on the island, but it ticks most of the boxes and should do for a couple of years to come. There are ferries to other, smaller islands to explore and with more time I will do so next trip. In the meantime, if you can tolerate slightly less than all mod cons then I recommend you to find this before it is snapped up by the world’s tour operators. You can fly to Bangkok, on to Krabi and take a ferry, or into Kuala Lumpur then Langkawi and take a ferry – and some of the resorts have flushing loos!

Have you started planning your summer holidays yet?