Kos - from our own correspondent / CountryWives

A little while ago I wrote a blog post telling you that I was taking a very dear kind friend of mine to Kos for a week’s holiday and we were going to see what we could do to help the so called “swarms of refugees” who are arriving in Kos. Honestly, you would think that I had announced I was going to a war zone. I had numerous phone calls from well meaning friends telling me I really should cancel going to Kos because “It was far too dangerous! Why didn’t I go somewhere different.” “Why?” I said belligerently They spluttered a bit…none of them wishing NOT to be be PC. .”You CAN’T go to a place where hundreds of refugees are FIGHTING. It’s dangerous.”

I am afraid to say I am a stubborn old goat – a Capricorn – and I don’t like being told what to do. So here I am in Kos with my friend and we are having a lovely time! 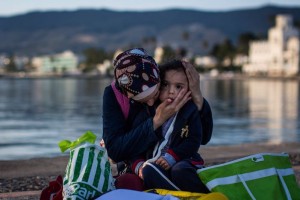 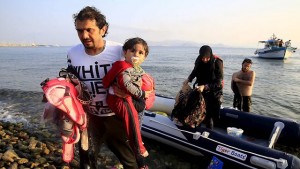 After my last blog, such is the power of CW, I got a lot of feedback as to what would be really useful to take for people who had lost everything on their perilous journey across from Turkey. Apparently, shoes (many people lose them in the water), soap, nappies, tampons and pantie pads are desperately needed. Plus sweets for kids. Our suitcases were packed with children’s anoraks, baby clothes, toddlers trousers and T shirts, soap and pantie liners. I have to say I was half hoping Customs would stop us, just to see the look on a customs official’s face! Anyway, I am delighted to report we got through with everything and have arranged for our stuff to be taken to a place where things are being distributed properly. A Dutch relief agency is doing wonderful work.

As for the holidaymakers. The sunbeds on the beaches are full. Mounds of mostly northern European flesh grills to a perfect polished mahogany every day. Some are honed and toned, some are not! Most of the people are so amazingly brown that you wonder if they have any white bits at all! They are mostly couples – sixties plus. Well it is September and the kids have gone home. The restaurants are full of tall Dutch with small golden children (their holidays must be different), blonde Germans and white Poles. Interestingly enough all nations who have been occupied. Sadly there are very few Brits .. Well not here anyway. What is wrong with us lily livered Brits? Apparently they have cancelled their holidays here ….. why? What were they frightened of? The answer appears to be the media. 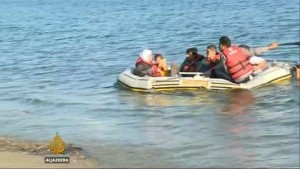 Such is the power of the TV. Don’t tell me the Germans, Poles and Dutch didn’t all have the same media pictures. They haven’t cancelled – they are here in bulk. There is nothing to be frightened of. Do people think these poor refugees (who are just thankful to be alive after the traumas they they have gone through) are going to rob them? I assure you these people just want to move on, keep out of trouble and get to somewhere where they can find work and be away from explosions, murder and snipers.

I spent this afternoon at the port of Kos. There are orderly rows of tents. There are standpipes. And there are mobile loos. I saw no violence. No piles of filth. What I did see were dignified families trying to keep clean. Trying to amuse their children and just desperate to fix up their on going travels. I talked to a young Syrian woman with two charming children, who was on her way to join her husband who had gone before her.

Every Greek I spoke to had nothing but sympathy for the refugees. But the Greeks can not manage on their own nor, I might add, can the Italians. At the moment most refugees want to go to Germany. Why? Because they feel marginally more wanted there than anywhere else. And hopefully they will have a chance of getting employment. 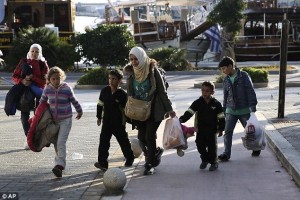 As to the pictures of fighting… again razzed up by the media to sell papers. What actually happened was there were so many people trying to get processed that the gates had to be closed for safety’s sake. There wasn’t enough room in the building. (They do the same on the tube platforms in London.) it’s just sensible, not newsworthy! Apparently a few hotheads started pushing and shoving and that’s it. I have seen the rows of tents, I have seen the children trying to fish in the harbour with a bit of string and a stick. I have seen very tiny babies in the arms of mothers while fathers may be carrying two other children; they have no pushchairs, no toys, and only the few clothes they stand up in. They are not vagabonds and many of them have the skills we need in our country – and they certainly all want to work!

Why can’t the whole of Europe take a quota according to the size of each country. Why can’t the Americans take some and also Australia, New Zealand and South Africa. What is wrong with the thinking of our politicians. I’m sure everyone saw the appalling picture of the lifeless three year old boy on a Bodrum beach. People are drowning. I am not in the media. I am not a politician. I’m just a simple granny. I write about what I see. I see we all need to shoulder responsibility. We need to take ACTION and lobby our leaders to GET on with it.

Meanwhile tourism goes on. The weather is glorious. I’m island hopping now. I bought a ferry ticket for ten euros and for that you can travel for three hours on the most luxurious blue star ferry to some of the smaller islands including the lovely Tilos which is where we are going, It has a population of only 750 people and is very Shirley Valentine. On my trip the crew outnumbered the passengers… talk about service!

Come on adventurous Brits. Visit the Greek islands. The season goes on until October and the weather is still lovely. Oh yes and please bring some soap or crayons and pads, or nappies and shoes – the customs won’t stop you!