I’m not going to pretend otherwise, when it comes to skiing I’m more about the après. I’m not quite in the category of a woman I saw last time I set ski on the slopes, who panicked on the nursery run and had to be towed back to the resort on one of those mountain rescue sled/gurneys. But I lack style and confidence and the outfits do me no favours. My husband learned to ski when he was very young and must have somehow got hold of my share of the skiing style and confidence as well as his own. And when I wrote last week about the mini-breaks I’m trying to plan for us I thought maybe this time I should take him for some late late snow? It’s not that selfless: I love the scale of a serious alpine view, I love a bracing, snowy stroll, and I’ve even been known to don crampons and walk on glaciers. And I have been thinking that maybe cross-country skiing might be the winter sport I’m best suited for? Being totally useless on ski resorts I asked the experts at the Hotel Guru to recommend resorts and hotels with availability…

Ski-Weekend in Morzine
Morzine has all the traditional trimmings of a French alpine town – and it’s just a short dash away from Geneva airport. Perfect for beginners and intermediates, Morzine is also popular with cross country skiers. And the peaceful hills around the resort are ideal for an off-piste ramble. Morzine is capital of the Portes du Soleil region so the après ski is great and there’s plenty to do for non-skiers.

Where to Stay?
La Ferme du Lac Vert is a luxurious, 14 room chalet in a small, traditional looking village just outside Morzine. Each of the rooms is decorated individually, with a collection of original features, antiques and modern art. They also have hot tubs and serve top notch food. There’s availability left in February and March, and prices start from £625pp half board.
Practical Details: Geneva airport is 75 minutes drive away, and the nearest stations, Clues or Thonon-Les-Bains, are both about 30mins from town. There are buses as well as transfers and taxis available from both the airport and the stations. February in Morzine is one of the coldest months of the year, with average lows of -2°C, but by March the average lows are 3°C. Snow is fairly reliable but dependent on what kind of a season it’s been (and this has been one of the best for years).

Romance in Saint-Martin-de-Belleville
Saint-Martin-de-Belleville is one of the most peaceful spots in Les Trois Vallées, with a small square and a beautiful old church. It’s also between Meribel and Val Thorens, so you’re well located for the slopes and the snow. Around town there are rolling intermediate runs and some good off-piste skiing. Plus some excellent restaurants.

Where to Stay?
La Bouitte is a cosily converted 18th century farmhouse with eight rustic, romantic rooms and a Michelin starred restaurant. Each of the rooms are different – Aurélie and Angeline are our favourites – all deliciously rustic with creaky floors, ancient beams and numerous cowbells. You’ll find homemade pastries and jams for breakfast. There are rooms available in March, starting from around £265.
Practical Details: Geneva airport is about two hours from Saint-Martin-de-Belleville, while Chambéry is about an hour and twenty minutes. You can get a bus from either airport, hire a car or arrange a private transfer or taxi. Saint-Martin-de-Belleville has a great snow record, and this year is no different.

Serious Skiing in Chamonix
Under the snow-cloud trapping peace of Mont Blanc, Chamonix is known for good late season skiing. Plus, you can ski on the glacier on Les Grandes Montets. Beloved by winter sports enthusiasts from Olympic standard downwards, Chamonix offers thrilling runs, incredible vistas of Mont Blanc and the alps and lively après-ski.

Where to Stay?
The Rocky Pop Hotel is a large, colourful, three star hotel in Les Houches. Fun and unfussy, there are two restaurants and plenty of space and facilities for both families and couples. You’re just a few minutes from the nearest lift, and the hotel also offers ski hire and storage facilities. Doubles start from under £90 per night and there are still rooms available in March.
Practical Details: Geneva airport is closest, at around an hour and a quarter, followed by Chambéry which is about an hour and a half, and then Turin and Lyon airports which are about two hours. Most visitors travelling from outside France travel via Geneva as there’s a good choice of flights year round and easy airport transfers. Chamonix’s snow season lasts between November and April, and the top altitude is so high you’re practically assured snow all season long.

Après Courmayeur
If your ski resort dream includes an alpine backdrop appropriate for a muesli box and a pedestrianised old stone village centre, then Courmayeur is for you. Until 1965 when a tunnel between Chamonix and Courmayeur was opened, this was an alpine spa town. Which is probably why Courmayeur looks so different to some of the more purpose built ski resorts. But now the après-ski is fantastic – especially for skiers who love great food -Heston Blumenthal comes most years to host the Mountain Gourmet Ski Experience! When it comes to the slopes, Courmayeur has 41kms of piste and 100kms of off piste, plus some great cross country skiing options.

Where to Stay?
The Hotel Cresta et Duc is a contemporary, 42 room hotel with an Italian restaurant and a spa, just 200metres from the main cable car. The rooms are light and airy and the vibe is relaxed and family friendly. During March you’ll pay around £120 per night, B&B, for a double room.
Practical Details: Geneva airport is about110kms away via the Mont Blanc tunnel, Turin airport is 150kms and Milan around 215kms. Courmayeur’s ski season runs between mid-December until the end of April, with snowfall still likely in March.

Alpine views in Wengen
On a plateau below the Eiger, Mönch and Jungfrau peaks, perches Wengen, one of the most charming, and traditional, ski resorts in Switzerland. The beauty of this spot has been attracting skiers since Edwardian times, and of all Switzerland’s resorts, this car-free, chalet-rich spot has been least changed by fashions. Wengen is also a good spot for trying other wintersports: skating, bobsleigh or dog sledding, anyone? Wengen is part of the Jungfrau ski area, but it’s the quietest hamlet, probably because you can only reach the town by train. You might find yourself too busy on the slopes, but if you’re at all interested in photography, or mountainous terrain, then it’s definitely worth taking the train up to Jungfraujoch, Europe’s highest railway station. It’s an incredible trip, through tunnels under tonnes of rock, past the north face of the Eiger, and the Eismeer ice sea, but the view from the top, of a bristling sea of glaciers ringed by black peaks, is bucket-list worthy.

Where to Stay?
The Hotel Schonegg is a 20 room hotel that claims to be one of Wengen’s oldest properties. Traditional and comfortable, the Schonegg feels like a charming mountain home, but with the added bonus of jacuzzis and an award-winning Swiss restaurant. Doubles start from around £195 per night during March. And breakfast is included.
Practical Details: Bern and Zurich are the closest airports to Wengen. From Zurich you can catch the train all the way to Wengen, but from Bern you’ll need to travel by car. If you choose to drive you’ll need to leave your car in the car park outside town and catch the train in. February is Wengen’s coldest month and March isn’t far behind, so it’s often best later in the ski season. 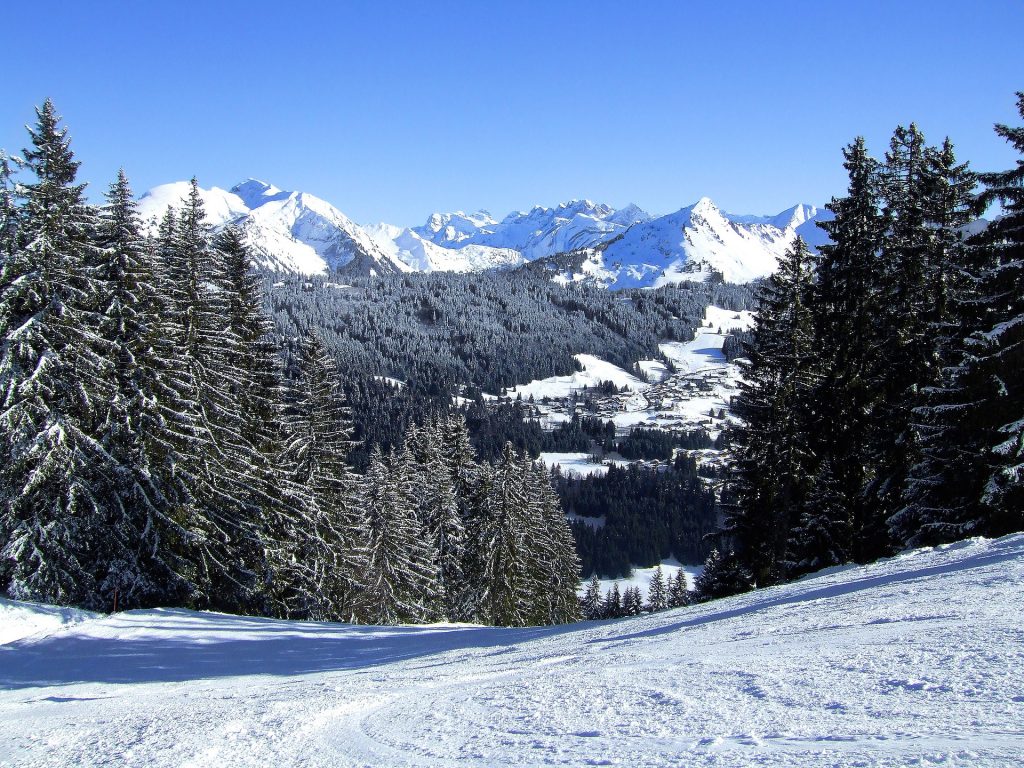