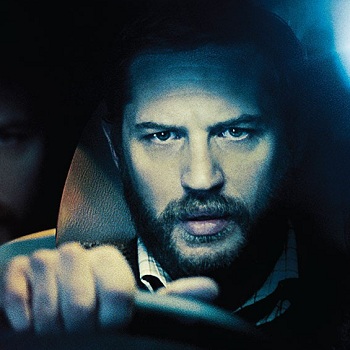 Oh the joys of a wet Bank Holiday Monday. Husband, bored out of his skull, drove to the supermarket in search of DVDs to while away the afternoon and came back with Locke. Now, for my lovely chap to bring back a decent film is, let’s say, somewhat of a rarity. Usually it is something featuring Bruce Willis or, his absolute faves, direct to video films!

So we settled down in true couch potato form with a large bowl of (slightly overmicrowaved) popcorn and switched it on.

If I tell you that the entire film features Locke (Tom Hardy) driving a car, you would be forgiven for thinking that this must be up for Most Boring Film of the Year. But it is anything but. The plot unfolds as he drives along answering and making various phone calls.

Ivan Locke has worked diligently to craft the life he has envisioned, dedicating himself to the job that he loves and the family he adores. On the eve of the biggest challenge of his career, Ivan receives a phone call that sets in motion a series of events that will unravel his family, job, and soul. All taking place over the course of one absolutely riveting car ride, Locke is an exploration of how one decision can lead to the complete collapse of a life.

Definitely a DVD for your collection.