The title – low season luxury for less – says it all this time, but here’s some additional background: there are some regions where the high and low seasons have historically been pegged to the North American holiday season, and to weather in the US and Canada that people want to escape from. But these destinations are almost as idyllic, or, in some cases, just as idyllic, in the low season. But the difference in price is huge.

The Yucatán Peninsula’s coastline is a colourful display of bright azure waters, lush green jungle, white sand and silvery Mayan ruins. Its colonial cities are graceful, its resorts lively and its landscape – dotted with small villages and completely run through with national parks and biospheres – is largely unsullied by overdevelopment. This is where you’ll find some of the world’s best diving and snorkelling – both at sea and in the strange cenotes, or sinkholes, which are hidden beneath the jungle floor.

The travel companies say low season on the Yucatán Peninsula begins the day after Easter and runs through until mid-December. This pattern is partly to do with the calm, warm weather, but it’s also partly to do with Americans still being the primary visitors, and that’s when they want to visit. Generally it’s dry and hot between November and April, and rainy between May and October – which is probably OK for the beaches but not so good if you want to explore the interior. The latter part of the rainy season is also hurricane season, which might be bad, but the tropical storms do clear some of the humidity, so if you’re climbing on ruins you’ll be grateful for the rain. The rainy season does reduce visibility for divers and snorkellers, though. 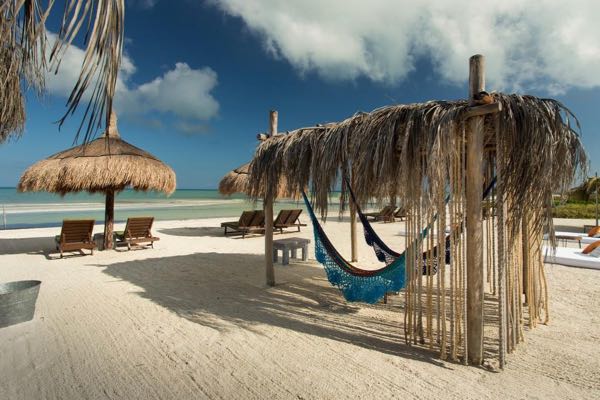 Where to Stay?  CasaSandra is an 18 room boutique-feeling property promising a laid-back island break in a paradisal setting. The whitewashed rooms are just steps from a beautiful, white sandy beach decked out with swinging hammocks and shaded deck chairs.  Cocktails are served poolside and the restaurant specialises in seafood and does a very good job of it.  Rooms start from around £210 per night. 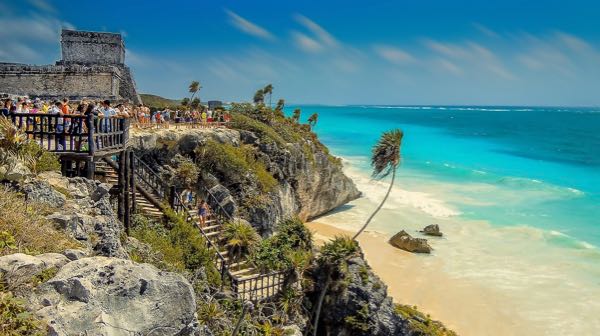 Practical Details:  CasaSandra is on Isla Holbox in Quintana Roo, which is a well kept secret of the Mexican Caribbean and the perfect spot for a low season beach resort break. Cancún Airport is the closest airport, and from there you need to travel to Chiquila, which is a two or three hour drive. From Chiquila you catch a ferry across to the island.

Tulum is also in Quintana Roo, perched on a cliff overlooking pristine, white beaches and a bright green sea and the ruins of a Mayan port. The Zamas Hotel is a collection of 20 rustic-chic rooms on one of Tulum’s best stretches of beach. The rooms are decorated in pastel shades and have tiled floors and wooden furniture, and let in plenty of light. Plus they have a private villa, which is ideal for families. The traditional Mayan restaurant is right on the beach too.  And at around $145 per night it’s great value for money.

Practical Details: Cancún Airport is your nearest airport again, around 120kms from Tulum.  You can catch a bus from the airport, though there’s not a direct bus, or you can drive yourself or arrange a transfer.

The Caribbean, and the islands in it, stretches a long way between North and South America, so though they share many features – like beautiful, mostly white, sandy beaches, bright aquamarine waters and lush, green interiors – they’re also very different. Both when it comes to culture and lifestyle, and weather. Barbados bustles, while St. Vincent is a graceful, colonial beauty, the Caymans and St. Kitts are very British, while Sint Eustatius is very Dutch. So choosing the right island is a challenge enough, let alone trying to work out when the low seasons fall.

Actually the temperature difference between high season and low season is small, the summer maximum average is 29°C, and the winter maximum average 24°C – though it can be cooler at night in winter. The traditional high season in the Caribbean runs between mid-December and mid-May, and the official hurricane season runs from June until the end of November. The high season does correspond with the warmest, driest period on most islands, but it’s also the most miserable time weather-wise in the US, traditionally the Caribbean’s biggest market. Summer is hot. But cheaper. And satellite forecasts can usually tell when hurricanes are coming, so it’s certainly worth doing the math both on the cost of your travel and the risk of bad weather on your chosen dates. 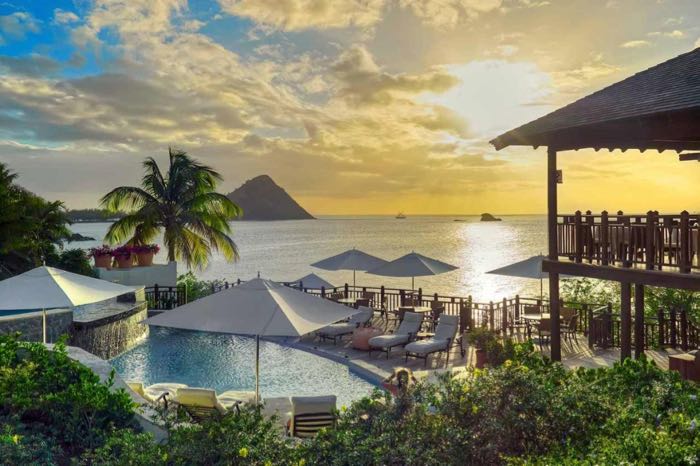 Where to Stay? Cap Maison is a sensational 49 room hotel above idyllic Smuggler’s Cove – how much more Caribbean can you get? Rooms and villas are large, with dark furniture and large balconies and verandahs. Villas have kitchens and living rooms.  There are two pools, gym and spa, and you’re surrounded by lush gardens. Plus there’s lots to do at the beach – the hotel has snorkelling kit, paddle boards, kayaks and hobie cats.  And you’re about 5 mins from a golf course.  This is Caribbean luxury on a peaceful, intimate scale.  They’re offering up to 35% off if you book more than 3 nights this summer. Doubles from $329 B&B.

Practical Details:  The island’s airport located on the Southern tip of the island (around an hour and a half’s drive from Cap Maison) and you can fly direct from London Gatwick in about nine hours.

Our second recommendation is in the Blue Mountains of Jamaica. Jamaica is just as Caribbean as the rest of the Caribbean, it just has more of that bright green interior and larger centres, plus Kingston.  And from the Blue Mountains you get the benefit of all of these things. Plus, they grow some great coffee here. Between March and mid-April Jamaica is popular with students on their spring break, so it’s got an extra high season. 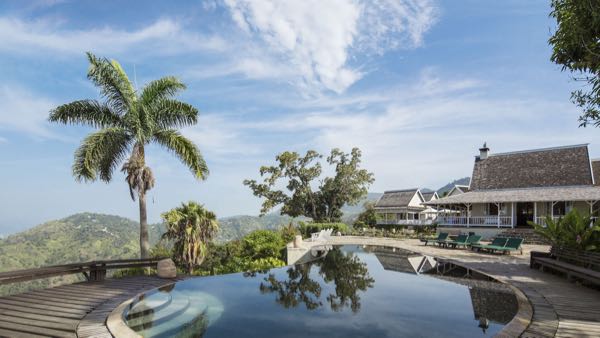 Where to Stay? Strawberry Hill is perched, homestead-style in the cool of the mountains, and has 11 gorgeous rooms and unbeatable views across Kingston – especially from the infinity pool. The rooms are spread between 13 little cottages which have been carefully crafted, and designed by an award winning architect to feel like you’re staying the original, period house – which instead has a library and sitting room, a range of places to eat and a great bar. The decor has been put together just as carefully. Rooms start from around $210 per night.

There are 700 islands, islets and atolls making up the Bahamas, where you’ll find our third Caribbean recommendation, so there’s gotta be something there for everyone. The Bahamas aren’t just about the white sand and the azure seas, they have a fantastically dramatic history of smuggling, piracy and explorers!  The larger islands offer varied terrain, from mangrove swamps to palm savannahs and primeval forests, Nassau, the capital, is busy and colourful, and Grand Bahama offers a very American style resort holiday.  The rest offer all sorts of wonderful.  Cat Island, where our recommendation can be found, has the highest mountain in the Bahamas, and an incredible system of underground caves and channels. 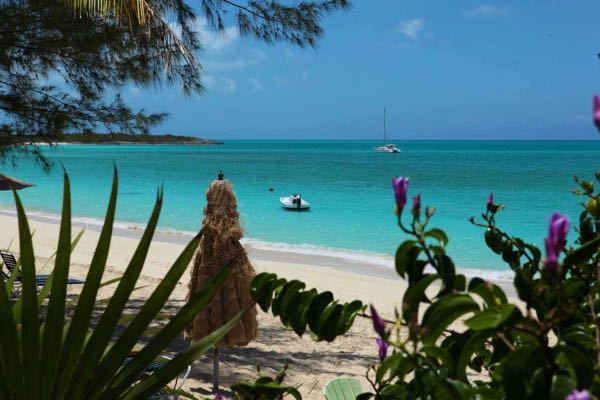 Where to Stay? Fernandez Bay Village is a collection of charming, beach front cottages with stone walls, tiled floors, bamboo furniture and large private patios overlooking the ocean. As well as the beach, the hotel has a lush garden, a tiki bar and a restaurant with an international menu. This is a peaceful spot, but also family friendly, with plenty of space to enjoy yourself without stepping on anyone else’s toes. Rooms start from just under $240 per night.

Practical Details:  Cat Island has two airports – Arthur’s Town (to the north of the island) and New Bight Airport. Sky Bahamas flies to both these destinations from Nassau.