"Madam, have you been drinking? / CountryWives 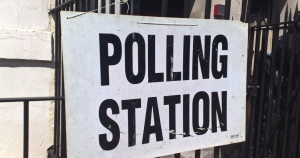 Sassy Singleton and I have both been really busy bees recently, volunteering. We are both obsessive volunteers, the sort of children who offered to have the terrapins for the summer holidays, presumably much to our parents horror.  Someone only has to say “Will you…..” and I immediately say “Yes”. Lord knows it has caused a few problems in my life, but we won’t go into that! Back to the volunteering. As you may have noticed, we have just had an election. Sassy and I were very involved with telling and stuffing and leafleting. 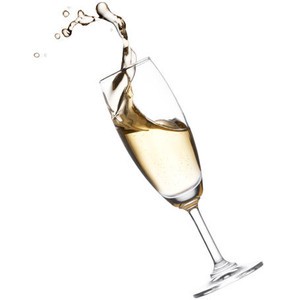 On the Saturday after the election by way of a thank you to all the good ladies who had worked so hard, we were invited to the Town Hall to be entertained in the Mayor’s Parlour! I have been to a lot of places in my life but never a Mayor’s Parlour, so of course I accepted. So that is how Sassy and I found ourselves climbing the huge white rococo staircase at Henley Town Hall. We found the room and, with some trepidation, opened the door. Inside were the excited newly elected councillors and a bevy of goodly helpers clustered around a huge mahogany table laden with champagne and iced buns. Iced buns….. I ask you… did I miss something? Behind the door hung the Mayor’s magnificent red and gold robe…on a wire coat hanger! Incongruous, yes. Nevertheless rather charming in a sort of South Oxfordshire way. Sassy and I dived in…

After an extremely frothy self congratulatory ‘jolly’, Sassy and I decided to have lunch. Neither of us had had breakfast and the champagne was beginning to slosh around a bit. I had resisted the iced buns since I am on a diet!

Sassy was keen to chat to me about her future squeeze. I love hearing about her exploits and we always manage to have laugh, though why she comes to me for advice I can not imagine – I’ve been married three times so I can’t possibly be a good picker! Anyway we had a lovely lunch, a drop more wine and resolved to meet a little later in the day to go and see the film Spooks which was on at our local cinema. I went home read the paper and promptly fell asleep and Sassy cleared out her wardrobe. 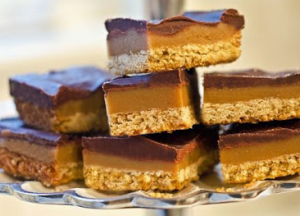 Our cinema is one of those trendy new ones where you can take in drinks, eat your own canapés and stuff yourself silly if you wish. Normally I buy myself a large red wine but for some reason this time Sassy and I decided to have black coffee. There was a plate of homemade millionaires shortbread on the counter – thick thick chocolate and caramel oozing out – it looked divine. Sassy urged me to have one… it would be her treat and added that she would definitely be having one. “Psssst – you are on a diet” said my subconscious. But my will evaporated (I told you I say yes to everything) and we trotted into the cinema clutching our coffee and shortbread.

The film was good. It had me sitting on the edge of my seat. Afterwards Sassy and I went our separate ways. “I’ll ring you” I shouted. That’s funny, I thought, where’s my phone? It wasn’t in my handbag or in my coat. I resolved to look for it once home. Maybe it had fallen down the side of the chair when I had had my zzzz in the afternoon.

I got home and looked everywhere. No phone. I rang my mobile from the landline. Silence. Oh no, I’ve lost my phone and I haven’t got anyone’s numbers.  Worse than that, I’ve got my late mother’s lovely Portuguese carer coming by train to see me tomorrow – we had arranged that she would phone me with her arrival time. I didn’t have her number. Suddenly you realise what a pain it is not to have phone (how we have learned to love them – I feel naked without mine). There was nothing for it, I had to go back into town and see if my phone was either at Henley Town Hall (probably now locked up until Monday morning) or the pub where we had eaten lunch. So I drove back down into Henley. It was a Saturday night so the first problem was there was nowhere to park. The town is invaded by aliens at the weekend – you know, YOUNG people.  It’s lovely to see them, but they do take up a lot of space.

Suddenly I saw an opportunity. A cul de sac almost opposite the pub I was making for. I sped up it only to find it was all double yellow lines and there was no place to turn. I started to reverse back very carefully when suddenly – SCREECH. There was a burning smell of tyres – I had managed to back onto the main road and straight into the path of a police car. 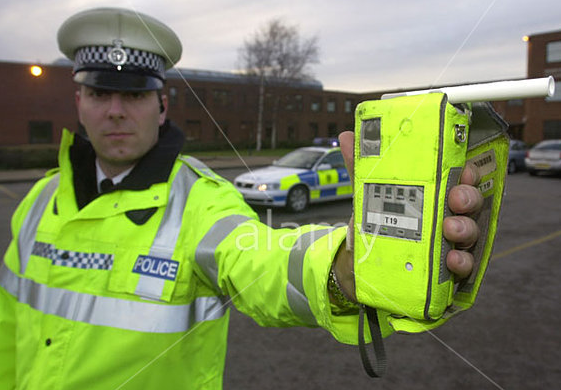 “Madam” said the policeman, “have you been drinking?”
“Yes I have, well at lunchtime. I had a spritzer. And before that I was in the Mayor’s Parlour and we were celebrating with champagne. But that’s ages ago. I’ve lost my phone and I was trying to park and I’ve never been up that road before. But it was  too narrow to turn so I had to back out …and I was concentrating soooo hard on not hitting anything that I didn’t realise I had reached the main road. I’m awfully sorry…. I was completely in the wrong… I know I mustn’t back onto a main road. It’s cos I’ve lost my phone… And I’ve got someone coming tomorrow and I don’t know how to get hold of her” I rambled on.

“Nevertheless”said the police officer “I do have to breathalise you. Have you ever had to do this before?
“No no no, never. I’ve never been apprehended before. I’m seventy one and I have a clean licence and I am a very law abiding citizen. If it says keep off the grass, I don’t walk on it” I added hopefully.
“Nevertheless “repeated the policeman, but more kindly this time,”you do need to blow into this.” With that he whipped out his instrument and asked me to fold my lips round it and blow with a steady stream.

I blew into it hoping for the best. “Blow blow blow” he said “Keep going.” I hadn’t another measure of oxygen in my lungs. I’m sure he thought I was cheating. I have a weak chest and can only puff 250 at the best of times.

“It’s OK ” he said. God bless the Millionaires chocolate shortbread, God bless my weak will and God bless Sassy for buying it for me.

The phone? Well I got it. I had left it at the pub…. it’s such an old one no-one wanted to steal it. I’m now writing all my numbers down into a little book. And the diet? That’s gone too!