In search of a cheap G & T / CountryWives

I’m back in Malaysia. I grew up here. Well that is until my parents sent me back to Alcatraz, otherwise known as Malvern Girls College. I can tell you that was a really nasty shock. Nobody liked me. I was a precocious nine year old who had had servants to do everything for me, I didn’t have a pony and had nothing in common with the other girls except age, I was 9. I had travelled wildly and needed to be the centre of attention at all times. I don’t blame them for not liking me. I’m sure I was a spoilt brat.

The conditions were pretty grim. We had no heating in the dormitories and the water in the jugs was sometimes frozen in the mornings – so as you can imagine, for someone who had lived in 34 degrees most of her life, it was total misery. Add to that, my parents then waved goodbye to me and left me in that Malvern prison for the next three years without ever visiting me! I do not have happy memories of school. I am not blaming my parents – they had no choice like many other parents in the 50s. My father had to go back to S E Asia to work and my poor mother was split between choosing to stay with her children or being at her husband’s side. She chose my father.

Thus it is with huge pleasure and excitement that I find myself back in this wonderful land of smiley faces, warm sea water and delicious food. It is really the only happy memory of my childhood.

Things have changed a bit in the last 65 years as you would imagine. Malaysia has been independent for a long time. The Moslem women now all wear the hajib. They did not in the 50’s. Very few men wear national dress – they prefer jeans to sarongs, which I find sad as they looked so handsome in the lovely colours. But the happy smiles and gentle people are still the same. The vistas and sunsets are still spectacular. The beaches are now a little more crowded. We used to go to Pankor and be the only people there! Apart from the houses looking a bit different cars on the roads instead of bullock carts, the essence – smells of frangipani, jasmine and open drains – are all exactly as I remember them!

The reason for this trip is I’m on my way to see my darling grandchildren, but I’ve stopped off to have a quick girls’ holiday with Other Granny and another girl. I say girl… we are all over 70! We’re in Langkawi, a delightful island in the north west of the Malaysian peninsular. 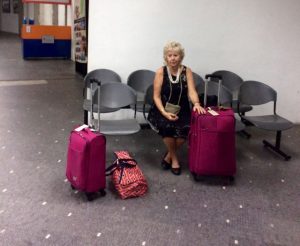 We decided to take the ferry – a two and a half hour trip from Penang to Langkawi – which only goes to prove we are gluttons for punishment. We got up horribly early to get to the terminal. We had to be there at dawn to collect our tickets and, due to a mix up with the taxi, we arrived at the ferry pier an hour early. The place was deserted and it was still pitch dark. There was nowhere to sit except the rather dirty pavement and it had been raining. So we stood around feeling rather out of place and dying for an all night greasy spoon where we could at least have got a coffee. A couple of back packers joined us. They were very blonde very brown and wearing very short shorts. Finally some kind Chinese man took pity on us. He found the keys and opened the huge iron gates to the dock and let us in so at least we could sit down. There is still respect for elderly people in Malaysia thank goodness. Or was it the back packers’ short shorts?! 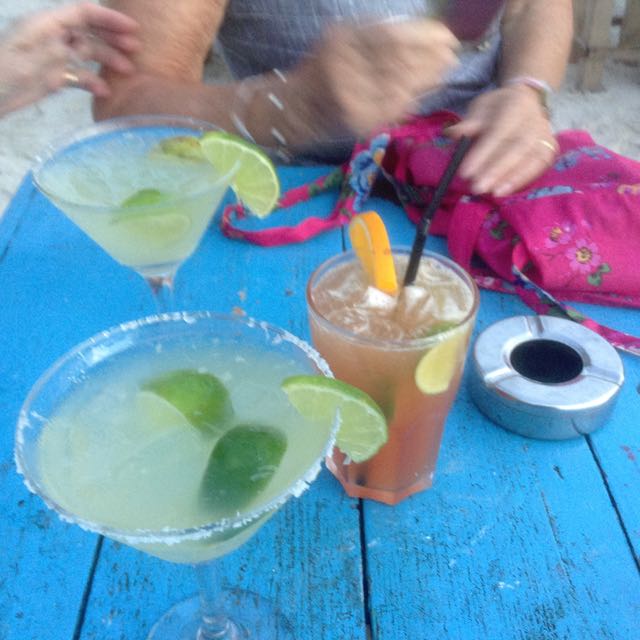 There is not much to say about the ferry journey from Penang to Langkawi except don’t take it unless you are a very good sailor. It is not pleasant but it is cheap! However, our hotel was
absolutely delightful. I really could not fault it in any way. It had a magnificent stretch of beach in front of it, well groomed and litter free. Masses of sunbeds and unlimited towels, two pools, one with swim up bar – always a must. The staff were friendly, courteous and efficient.

The name of the hotel, should anyone wish to go there is the Meritus Pelang. As anyone will know from my previous blogs I am not always complimentary – Cuba got nil points! 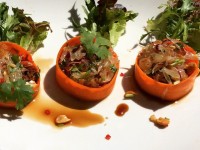 My final recommendation for Langkawi, should you get fed up with Asian food and want a really delicious healthy unusual salad, is The Fat Frog. There you will find the charming owner, only too pleased to serve you mouthwatering dishes from all over the world accompanied by a glorious view.

The last thing that tickled me hugely – and surprised me a little – was an extremely good looking young man who stopped me in the road as I was going to a restaurant one night and said “You have the most beautiful eyes. You must have been very sexy…” (how nice I thought) “when you were young” he added!

That’s it for now. I’ll give you an insight on expat life in Penang next and what it’s like to retire to Malaysia – a place where you can buy a gin and tonic for two pounds and a taxi ride is a pound!

annabelandgracecw
•
Follow
It’s definitely the day for layering clothes and whilst these pics were taken outside on slightly warmer days we are now wearing our layers indoors. Gilets are the perfect top layer. I can work/cook/sleep in mine!! More details in our fashion post - link in bio. . Gilets, shirts, polo-necks, cable knitwear and jeans from @artichokegirls Annabel’s boots from @jonesbootmaker . #layeringclothing #layeringclothes #keepingwarm #keepingwarminwinter #keepingwarminstyle #winterfashion #winter2022 #annabelandgrace #annabelandgracemagazine #womenover60 #womenover50 #womenover70 #womenintheir60s #onlinemagazineforwomen
View on Instagram |
1/9

annabelandgracecw
•
Follow
Grace is making Dahl (recipe coming this weekend) in her favourite @circulonuk non-stick pan. Read all about them in her latest post (link in bio). . And before you ask: Grace is wearing red jumper by @kettlewellcolours Layering blouse by @me_andem Jeans by @artichokegirls Boots by @fairfaxandfavor All her own . #cookware #cookingpans #saucepans #nonstickcookware #circulon #reddahl #dahl #dahlrecipe #autumnfood #cookinginspiration #annabelandgrace #annabelandgracemagazine
View on Instagram |
2/9

annabelandgracecw
•
Follow
Colourful shoes or boots or neutral colours. What’s your preference? Luckily we found these green and pale blue boots from @pavers_shoes or the more traditional navy trainers and black boots from @jonesbootmaker It’s good to have a choice so should I go colourful or more practical? Just as an aside the Pavers boots were so comfortable and lightweight. Green jumper from @marksandspencer Polo necks, jeans, shirts & gilets all from @artichokegirls . #colourfulfootwear #greenboots #colourfulboots #fabfootwear #ankleboots #blackchelseaboots #popofcolour #funfootwear #annabelandgrace #annabelandgracemagazine #womenover50 #womenover60 #womenintheir60s #womenintheir50s #stylishwomen #stylishfootwear
View on Instagram |
3/9

annabelandgracecw
•
Follow
20% off everything on the @lookfabforever website so a great time to try out their newly launched eyeliners and lipliners. The perfect make-up range for us older women. . We are wearing polo necks from @lavenderhillclothing Annabel’s cardigan is from @me_andem . #makeupforolderwomen #lookfabulousforever #lookfabulous #lookfab #womenover50 #annabelandgrace #annabelandgracemagazine #womenover60
View on Instagram |
4/9

annabelandgracecw
•
Follow
Catching up with old friends - friendships that Covid put on hold but it was time to reignite them. It is these friendships that make our personalities. So Annabel went to see one of her longest-standing girlfriends in Toronto. And it was a double whammy as the Fall colours were just gorgeously vibrant. Read the full post on our website. . #canada #toronto #sisterhood #girlfriends #womensupportingwomen #womenover50 #womenover60 #onlinemagazineforwomen #catchingupwithfriends
View on Instagram |
5/9

annabelandgracecw
•
Follow
On a grey, wet Monday it is so good to connect with some of our followers and to meet some new ones when doing an IG Live with @janelovettcookery (have a watch of the video for some great cooking tips). If you are interested in our online magazine then do subscribe for FREE to our newsletter and you will receive two a week - a short one on Wednesday and the full one on Saturday. Link in bio for subscription. . #monday #onlinemagazineforwomen #annabelandgrace #freesubscription #womenover50 #womenintheir60s #womenover60
View on Instagram |
6/9

annabelandgracecw
•
Follow
Can’t wait to chat with @janelovettcookery on Monday (21st at 12pm GMT) as she always gives us some great cooking tips and general cooking inspiration. Do join us and ask any questions you want. If will be a fun hour. . #iglive #cooking #cookinginspiration #janelovettcookery #cookingtips #cookingclass #homecooking #cookingathome #cookingtime #cookingideas #cookingskills
View on Instagram |
7/9

annabelandgracecw
•
Follow
It’s competition time to win these three gorgeous items from the new @sophie_allport range. You just have to follow us on Instagram and then email annabel@annabelandgrace.com with the colour of the Robin’s breast. . #competition #sophieallport #homewares #win #robins #kitchenlife
View on Instagram |
8/9