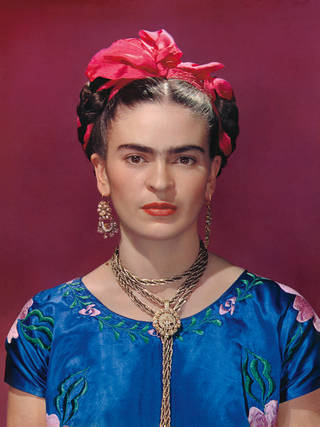 Like many of you I recently visited the V&A’s fantastic Frida Kahlo exhibition.  Ever since I have been casually researching a trip to Mexico… as you do! Obviously I would have to do Mexico City, but I also want to explore the jungles with their incredible ruins, and I definitely love the idea of experiencing something of the country’s colonial past. The way the traditional and colonial cultures have collided here is quite astoundingly colourful. And I should probably round all that off with a bit of a beach break – it seems silly not to, while I’m in a country with one of the world’s most incredible coastlines.

With these ideas in mind I realise this could be quite a long trip I’m planning. But it’s a fair distance to travel, and it would be an incredible country to see properly. So here is what Hotel Guru has come up with…

Dizzying with its strong colours and flavours, Mexico City is bright and vibrant. From the streets to the restaurants to the markets, to the walls of the municipal buildings with their murals, and probably even to the walls of your hotel! You’ll probably want to see the work of Frida Kahlo and Diego Riviera (you should have plenty of opportunity) and it’s definitely worth seeing the Ballet Folklorico de Mexico perform too. Mexico’s ancient treasures are also a big part of this city, with the Temple Maya, the main temple of the Aztec nation being excavated close to the centre of modern Mexico City. And the incredible collection belonging to the National Anthropological Museum is the sole reason some people come to Mexico.
Where to Stay? 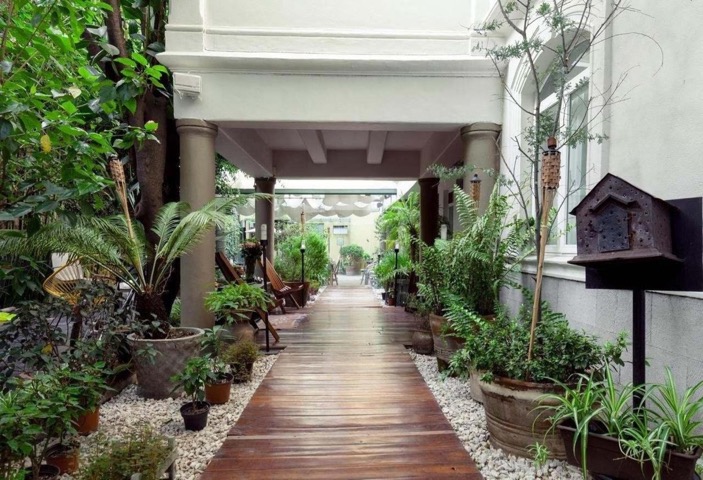 The Villa Condesa is a beautifully converted, 13 room mansion in the hip district of La Condesa. The location is perfect for exploring the city, there’s an exemplary Mexican restaurant on site, and numerous other bars and restaurants nearby. The rooms are light and airy, with wooden floors and luxurious, marble bathrooms. There’s also a very nice central courtyard. Rooms start from around $140 per night B&B.
Practical Details: Mexico City’s Benito Juarez International Airport is well connected to major UK hubs, and there are plenty of direct flights on offer from a range of airlines. The leg from the airport to your hotel might be slightly more complicated – there’s the usual choice of bus, Metro or taxi, but if you opt for a taxi you need to pre-purchase a taxi-ticket from a licensed vendor before you get in. Mexico City is at its most pleasant weather-wise between March and May, but it’s at its most colourful during its festivals – The Day of the Dead is especially memorable.

The Baja Peninsula is an epically long stretch of incredibly beautiful coastline. If that sounds too bland then forgive me. This region is anything but. The beaches are long pale arcs finished by boulders, or ruins, or cliffs, or canyons in every ice cream colour imaginable, the waters are every shade of bright blue, and range from infinity-pool-placid to the perfect-surfing-wave. And there are mountains and deserts and small villages and towns which are strange and wonderful…
Where to Stay?

The Villa Del Faro in San José del Cabo is an eight room villa packed with charming antiques and impressive art, in a magnificent seafront spot. On one side of the villa is the desert and on the other are waters and palm trees – so the views are amazing in all directions and the windows are appropriately enormous! You’re set in lush gardens against a deserted beach so they can be.. This is an incredible location for spotting both marine-life and bird-life. Rooms start from around $160 per night.
Practical Details: San José del Cabo is a relaxed, quiet and attractive historic centre a couple of kilometres away from a strip of bright white sand. The beach-y stretch is called Cabo San Lucas and is the entertainment hub of the area (restaurants, bars and clubs). Of an evening, this is one of the liveliest spots, while San José del Cabo is the Old Town, with more traditional Mexican charm. Between the two runs a highway off which are the golf courses and the big resorts Cabo San Lucas is known for.
San José del Cabo’s Los Cabos International Airport is close by, but you can’t fly direct from the UK at the moment, most options will route you through Mexico City. Baja California is incredible between January and March, when flowers bloom and you can expect to see whales pass by. By July the temperatures are nearing 40ºC. December is when you’ve a chance of seeing whale-sharks.

Campeche is one of the less-visited states of the Yucatán Peninsula, bordering right onto the Gulf of Mexico. It’s not clear why it’s not so popular with visitors. It has some spectacular Mayan ruins and a beautiful colonial capital city, and the landscape, of relatively flat woods and cenote-dotted tropical rainforest, is easily as fascinating as that of the rest of the region. And it also has some rather lovely beaches. But of course one of the huge draws of being less-visited, is that it’s quieter and yet extremely welcoming.
Where to Stay? 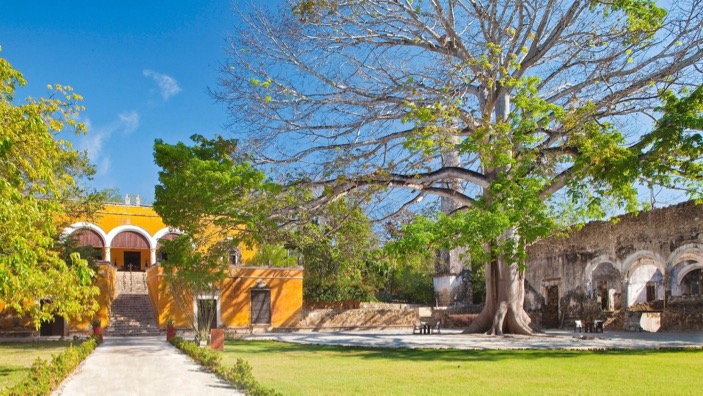 The 12 room Hacienda Uayamon offers contemporary comfort and design in an exquisite, tranquil setting of mustard coloured ruins and lush jungle. Inside, the rooms are traditional, with high, beamed ceilings and black and white tiled floors, four-poster beds and whirring overhead fans. There’s also a superb spa and an atmospheric restaurant. It’s very romantic and very stylish. Rooms start from around $287 per night.
Practical Details: You can’t fly direct to Campeche from the UK, you have to go via Mexico City. From there you can keep flying or take a charter service to Cancun and the catch the coach across the Yucatán – it takes six hours but you’ll see a lot. Campeche’s weather doesn’t change too much throughout the year, it’s always pretty hot, with daily average maximums rarely dropping below 30ºC, and peaking out at about 38ºC during the warmest months, May, June and July. And there’s not much rain outside the rainy seasons which are October through January and April through July. September is nice, as are January and February.

The vibrant cultural heart of the Yucatán Peninsula, Mérida is rich in colonial history from its graceful plazas to its extremely varied cuisine. Its narrow streets are colourful, its markets bustle, and you’re close to the peninsula’s ancient treasures and the beaches and resorts of Quintana Roo. Mérida retains a wonderful colonial feel, partly due to the jungle setting and architecture, and partly from the climate – it’s tropical, so people get most of their work done in the morning, take long siestas in the afternoon and come back in the evening when the cooler breezes roll in off the Gulf of Mexico. To get a sense of it all, start in Mérida’s Plaza Grande, the historic centre, where you’ll find a lot of the little shops and cafes, but also regular markets, concerts and performances. This is also where you’ll find the severe, square cathedral, the Museum of Contemporary Art, Governor’s Palace and stonework reclaimed from the ancient Mayan city Mérida was built on top of.
Where to Stay? 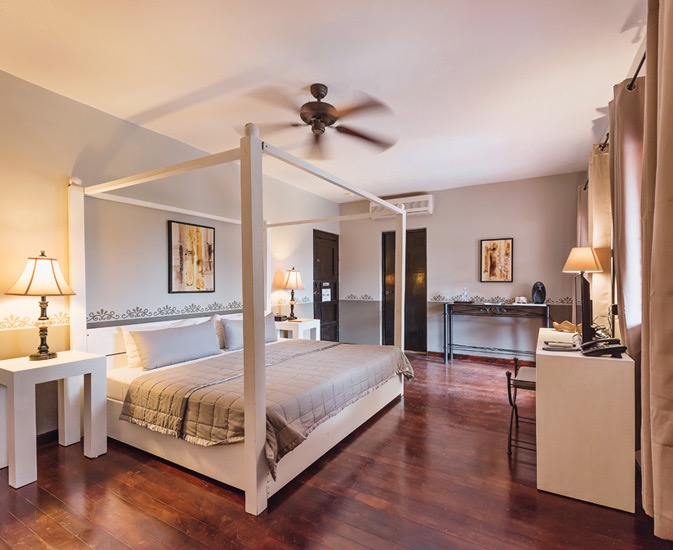 The Hotel Hacienda Mérida has a traditional, colonial facade, but inside it’s fresh, neutral and contemporary. It’s also great value, with rooms starting from around $129 per night. And you’re within stumbling distance of the bars and cafes of Mérida’s Plaza Mayor. The best rooms have balconies, and there’s a great courtyard pool and a bar.
Practical Details: Mérida’s small international airport, the Aeropuerto Internacional de Merida, is about ten kilometres outside of town. At the moment you can’t fly direct from the UK, and will need to change in Mexico City.
Like Campeche’s, Mérida’s weather doesn’t change too much throughout the year, it’s always pretty hot, with daily average maximums rarely dropping below 30ºC, and peaking out at about 38ºC during the warmest months, May, June and July. And there’s not much rain outside the rainy seasons which are October through January and April through July. September is nice and quiet, and January and February are very pleasant too, though Christmas and New Year are also among the most popular times to visit. 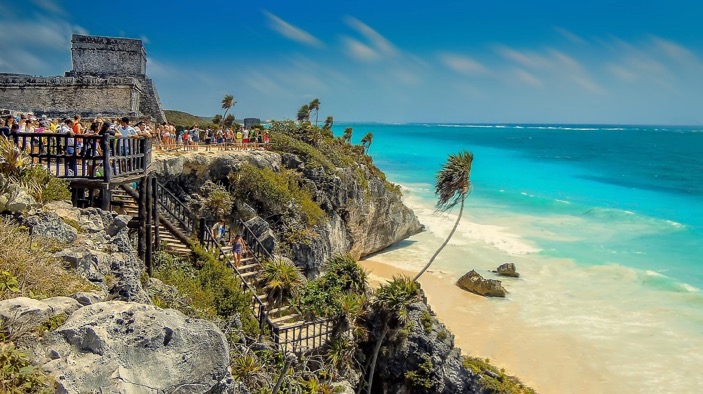 Perched on a cliff, overlooking pristine, white beaches and a bright green sea, the ruins of the Mayan port of Tulum make even the most banal holiday snaps beautiful. Laid back Tulum Pueblo is one of the best spots on the Riviera Maya if one of your main reasons for visiting Mexico is bucket-lister Chichén Itzá or Cobá. But it’s also got some of Mexico’s most beautiful beaches, and some excellent cenote diving and cave diving opportunities. Along with a spectacular reef just off shore.
Where to Stay? 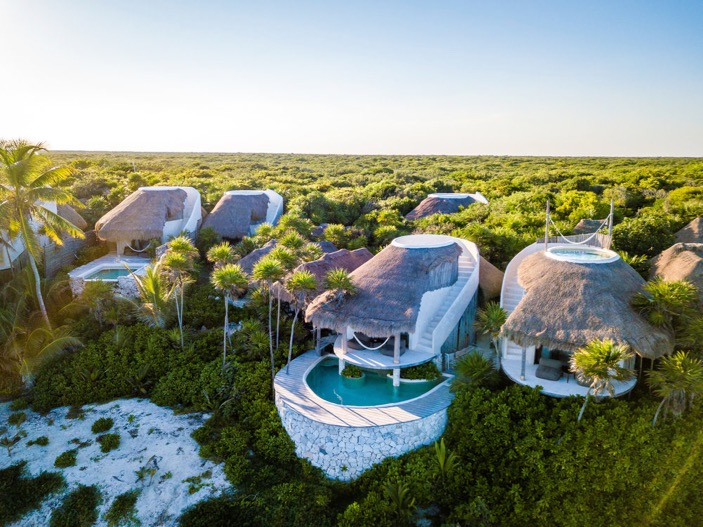 The Papaya Playa Project is an eco-friendly resort/hotel on an incredible, secluded stretch of pristine white beach. The boho-decor in the rooms and cabanas is simple and based on Mayan design, but it’s all about nature here, so expect an inside-out and outside-in hut-esque vibe. There are 73 rooms, so it’s not small, and there’s a hip beach club with a lively bar and contemporary Mexican cuisine. This is a special spot. Rooms start from around $120 per night.
Practical Details: Cancún International Airport is Tulum’s local air hub, about 120kms to the north. You can fly direct from the UK to Cancún, though you’ll have more choice if you fly in to Mexico City. The best time to visit Tulum is probably between October and December, post-hurricane season, but before the really busy period, which is from January to March. June, September and early October are when Tulum gets most of its rain.