Miranda and The Aneurysm: What Happened Next...

If you read The Hospital Appointment: Miranda Gets A Shock In More Ways Than One a couple of weeks ago, you’ll be keen to hear what happened next. Many A&G readers are at the age when health becomes one of our priorities – whether it’s a dodgy knee or something more serious. It’s how we handle those medical issues that can make all the difference and Miranda’s positive outlook on her diagnosis is something that can inspire us all…

I had to be tested for MRSA before I was allowed to be operated on. It consisted of various test tubes with sticks. It was a DIY swabbing affair with no room for dyslexic errors!

As most hospitals are a breeding ground for the MRSA bug, it would be only polite if ‘the powers that be’ reciprocated by testing one on the way out of their hospital too. Maybe present you with a little certificate that says they gave you back as good as you were received?

A fabulous fey, flamboyantly foreign (FFFFN) male nurse explained to me that if it transpired I was contaminated with the dreaded MRSA, it would be a true calamity and “much more fatal than if I didn’t have it!”

“Gosh! I’d much rather it was ‘just fatal’ rather than ‘more fatal’ any day of the week.”

I assume I had passed with a gold star and given a squeaky clean bill of health as no-one subjected me to an antibiotic hose-down before the scheduled day.

I was shown back into the fabulous fey, flamboyantly foreign nurse’s room ten days after my operation. It turned out that they discovered a second aneurysm in close proximity to the first, so they clipped both.

He was going to remove the clips or staples from my head wound. I asked if it was going to be a painful process, to which he tossed his head and dramatically paused (contemplating whether to lie or not?) and, with a theatrical wink, made a deal with me.  “If I hurt you, darling, you may smack my fat little tummy!”

So he started cutting out the clips.

“How many staples is that? And why have you stopped counting?”

“Because, darling, you keep hitting me!  I can’t possibly concentrate.”

I was alternating between crying and laughing whilst the ‘FFFFN’ was probably wishing his fat little tummy wasn’t in such close proximity to my smacking hand.

On the other hand I was submitting his extra stomach rolls to a thorough workout!  His tight tunic top hinted that any exercise in that area was long overdue.

The end count was twenty two staples.  He sweetly counted the lot for me.  It’s the least he could do for complaining about my short, sharp smacks as I was the one who had a scarf stuffed into my mouth and mascara cascading down my cheeks!

We were on our way to Gloucestershire, when we stopped at a service station.

Whilst the hubby guarded the contents of the car, I wandered through the garage’s automatic doors and located the self-service drinks counter. However, this counter seemed to be offering tea but with no immediately obvious way of obtaining it.  It wasn’t like a normal drinks machine.  I couldn’t see cups or levers and spouts or different buttons for one’s choice of beverage. I stood mesmerised, utterly dumbfounded by this conundrum.

I walked out of the garage… and got back in our car.  “Ok that was weird!  I couldn’t get the teas or the flapjacks because I found the whole process completely overwhelming!”

The hubby was dispatched to procure what we needed after declaring that, “to be intimidated by a tea machine is a little surprising, but fair enough I suppose in the circumstances.”

Well, actually no, I didn’t agree at all. I was aware this was the first time I was flying solo, two weeks to the day from my head operation but frankly… so what?

I sat and munched the flapjack, sipped the tea and mumbled “Fascinating – what was that all about? Have I suddenly become incapable of functioning properly?”

I obviously had to return to the garage for a second attempt at being independent.  It’s like ‘getting back on the horse after being thrown off it!’

Once through the door (with a cursory furious frown at the drinks counter) I made my way to the loos.

I spurted my hands all over with soapy foam and looked for the water tap. I assumed that a bar over the sink must have a hidden sensor, so I waved my hands beneath.  Blasts of air accosted me and blew the soapy foam everywhere including all over my face. I jumped away in shock. “Where on earth is the water in this place?  And why is this tap behaving like a hairdryer?”

I moved onto the neighbouring sink.

This time I wasn’t going to get pre-soaped up. I was hedging my bet.  First attempt… hurricane blast… second try… water spray.  Hurrah!

A little girl came out of the loo and stood at the first sink that had utterly defeated me. I waited to see if life was as tough on her as it had been on me. It was! Worse in fact! This girl’s soap foam covered her from head to toe!

“Try this one” I told her. It’s a bit better than the sink you have there.  I’ve just been zapped by both taps, too.”

My confidence was restored!  I was back!

This service station just loathes us all.  Isn’t life grand?

annabelandgracecw
•
Follow
Today, 23rd September, is officially the end of Summer 😢 But as you can see we are not getting out all our drab clothes. We are keeping summer going with our clothes. And of course layering with these Claire Cable jumpers £59 and Georgina Gilets £96 (use code A&G10 for 10% off the gilet until tomorrow only) from Artichoke Collection. We may be wearing our gilets inside this winter with the increase in energy prices! . @artichokegirls jumpers & gilets @callashoesuk - Grace’s red shoes @vivaia_official - Annabel’s hot pink shoes . #endofsummer #layeringclothing #winterjumper #winterwoolies #seasonchange #annabelandgrace #annabelandgracemagazine #onlinemagazineforwomen #lifestylemagazine #lifestyle #autumn #autumndressing #lovewhatwewear
View on Instagram |
1/9

annabelandgracecw
•
Follow
Just a few beauty products that have crept into my bathroom cabinet. All of them do what it says on the ‘tin’. Obviously they are not miracle creams or lotions but they all help and they make me feel I am doing my best for my skin and hair!! Just taking that time out to pamper oneself is so important and if you feel good then you will look good. . @praibeautyuk Ageless Upper Arm Creme @muradskincareuk Environmental Shield @erborian_uk CC Dull Correct & BB Eye @baebrow eyebrow serum @maybelline_makeupuk Curl Bounce Mascara @mvanclarke 3 more inches silver blonde shampoo . #skincare #beautyproducts #mascara #haircare #wellbeing #makeupover50 #womenover50 #womenover60 #womenover70 #womenintheir60s #lifestylemagazine #onlinemagazineforwomen #onlinemagazineforwomeneverywhere #timeofourlives #timetotakecareofyourself
View on Instagram |
2/9

annabelandgracecw
•
Follow
Why should we all keep making an effort with how we dress on a daily basis? Surely as women over 50 we have become invisible women. NOT SO according to our guest fashion writer Maggie Cox (aged 81 yrs) and we agree. Read Maggie’s article: Style for Women over 50 - Reasons we shouldn’t give up. (Link in bio) Grace is wearing blouse from @winserlondon (many seasons ago) Jeans from @marksandspencer Jewellery from charity shop. Annabel is wearing t-shirt from @patraselections jeans from @me_andem jewellery from @analuisany . #womenover50 #womenintheir60s #womenover60 #styleforwomen #olderwomen #fashionforolderwomen #lifebeginsat50 #onlinemagazineforwomen #lifestylemagazine @nevertoolatetolookgreat
View on Instagram |
3/9

annabelandgracecw
•
Follow
A friend of A&G, Libbla Kelly, queued to see Her Majesty The Queen lying in state. She shares her experience and the incredible feelings she has been left with in the latest article on our website. Have a read. Link on our website. . #queenelizabeth #lyinginstate #queenelizabethii #queensfuneral #hermajesty #payinghomage #womensupportingwomen #sisterhood #annabelandgracemagazine #pilgrimage
View on Instagram |
4/9

annabelandgracecw
•
Follow
Our header post this week from Grace is ‘Internet Dating for the Over 50’: Grace goes on a manhunt. See how she got on with this minefield of modern dating. Annabel & Grace are both wearing knitwear from the new collection at @silverpinkcompany - delicious colours and styles! . #onlinedating #datingforover60s #datingforwomen #loveinlateryears #grace #annabelandgrace #annabelandgracemagazine #womenintheir60s #womenover60 #womenover50 #timeofourlives #lifebeginsat50 ##womenover70
View on Instagram |
5/9

annabelandgracecw
•
Follow
Autumn is coming so we have been having a try on of some of the knitwear from @silverpinkcompany and @artichokegirls Have a look at Grace’s latest fashion post - What we wore last week. (Link in bio) And we have a 10% discount code for The Artichoke Georgina Gilet - A&G10 (valid until 24th Sept) We hate saying goodbye to summer but are determined to keep sunshine going with lots of colour in our wardrobes. We may need warm knitwear, gilets and lots of layers if we are to keep warm since we won’t be turning up the dial on our heating thermostat! . #winterknitwear #autumnfashion #discount #colourfulknitwear #timeofourlives #fashionstyle #stylishclothes #womenintheir60s #womenover50 #womenover60 #olderwomen #annabelandgracemagazine #annabelandgracefriends #annabelandgrace #onlinemagazineforwomen #lifestylemagazine
View on Instagram |
6/9

annabelandgracecw
•
Follow
You know we discuss literally everything - isn’t that what good friends are for? This week it is nose hair and Grace educates Annabel about stragglers! Growing older is such a minefield of hair growing in all the wrong places! Read Grace’s post dealing with nose hair on our website now . #nosehair #beautytips #womenover50 #womenover60 #womenover70 #timeofourlives #facialhair #annabelandgrace #annabelandgracemagazine #onlinemagazineforwomen #lifestylemagazine #chat #womentalk
View on Instagram |
7/9

annabelandgracecw
•
Follow
The start of another busy day for Annabel & Grace. A quick smashed avocado on sourdough toast at @harrisandhoolecoffee and time to catch up before we get to work!! . #coffeebreak #workday #henleyonthames #onlinemagazineforwomen #annabelandgracemagazine #annabelandgrace #womenover60 #womenover50 #lifestyle #lifestylemagazine
View on Instagram |
8/9 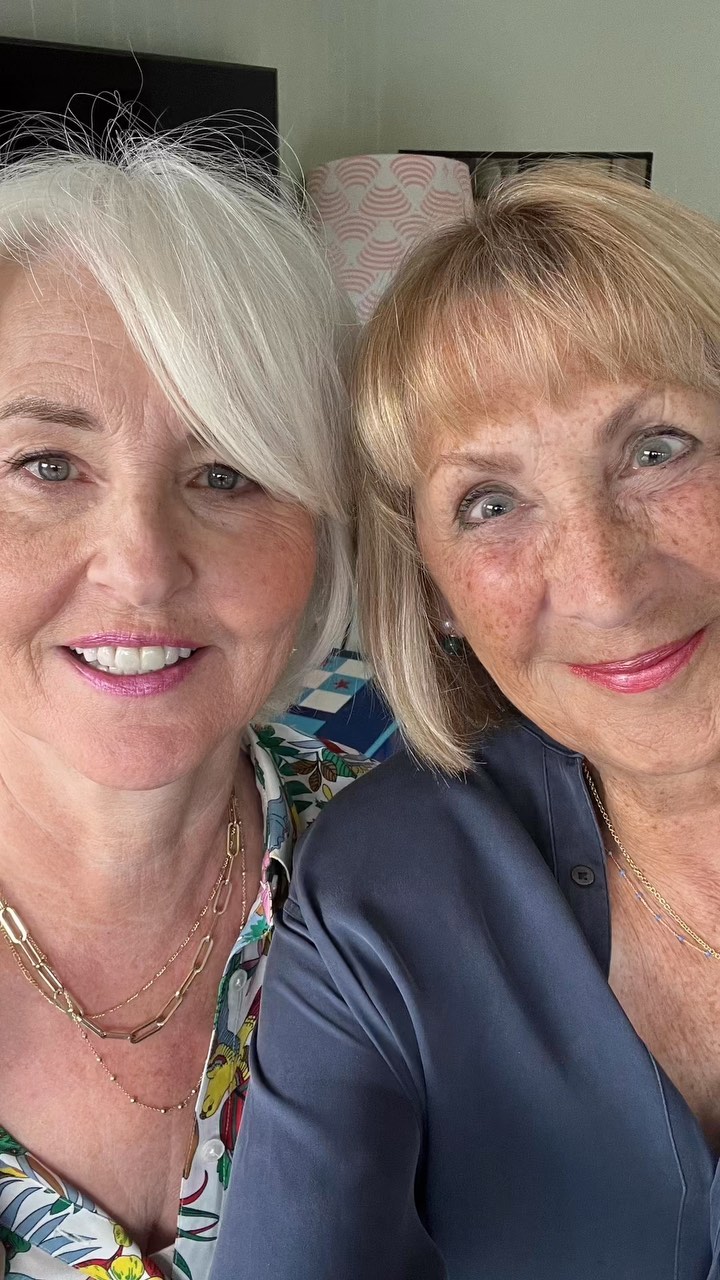