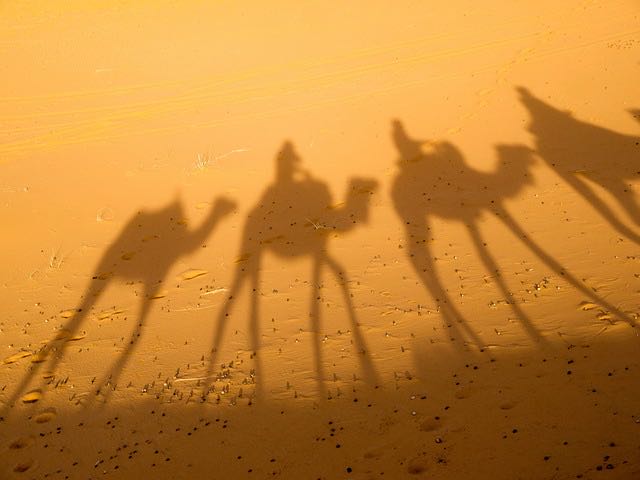 I am lucky enough to know some very well-travelled people. Some of my circle have lived abroad for a number of years – several of them in quite exotic destinations: Nairobi, Palau, Helsinki and Casablanca come to mind. So when, over a weekend brunch, the idea of some of us travelling together to Morocco was floated, the first question that came back was: “Are you thinking city, beach or mountain retreat?” Which is an excellent question. And it turned out there were a couple of different views around the table. We had:

“I’d love to go to Marrakech! We went in the 80s and the souks and the Medina were incredible – we always said we’d go back and stay in one of those boutique-y riads they keep featuring in the Sunday papers…”

“Eeek! Marrakech: we went to a wedding hosted by people who didn’t realise it’s hot, hot, HOT there in summer – 40 degrees. 40 DEGREES. Celsius. Peter almost passed out. Right after we lost the bride. But I’m definitely up for the Atlas Mountains…”

“Hasn’t Richard Branson bought an incredible old Berber palace there for his Mum to make into a desert-mountain retreat? Apparently it’s a stunning sight, rising out of the desert…”

“Is Branson a pro. or a con.? You see the real heart of the country can be found in the mountains and on the edge of the Sahara: the ancient oases have so many stories to tell…”

“What about Essaouira then, I’d love to try kitesurfing. Or paragliding…”

“Imagine that – views across the dunes, sun and wind on your face…”

“But surely the souks and the market places are where you’ll still find the real heart of Marrakech?”

And so it continued around the table. It’s actually pretty hard to make a choice. But I asked my kind Hotel Guru friends to come up with some accommodation recommendations for each. And we’ll see where we end up.

Morocco for Marrakech
Offering more than just a touch of exoticism and romance, Marrakech is a magical, far-away-feeling destination which is actually really easy to get to if you live in northern Europe. The colourful old souks, the cacophonous Medina and this great city’s graceful ancient buildings are all reasons to visit Marrakech. And these days, so too are some of the hotels and riads! 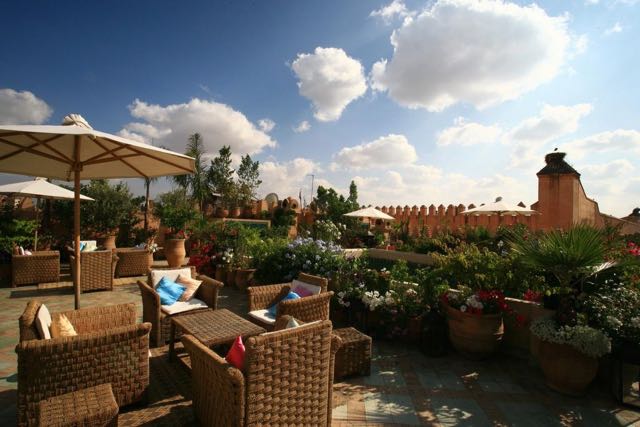 If you’re looking for an elegant riad, Dar Les Cigognes is perfect, with 11 individually designed rooms in the heart of Marrakech, just back from the Medina. Made up of two riads linked by a bridge over a small alleyway, the architecture and decor are a sophisticated marriage of Moroccan style and European design sensibilities. There’s a spa with a hammam and a jacuzzi plus an excellent Moroccan restaurant which has won awards for its cooking school. Doubles start from around £80 per night. 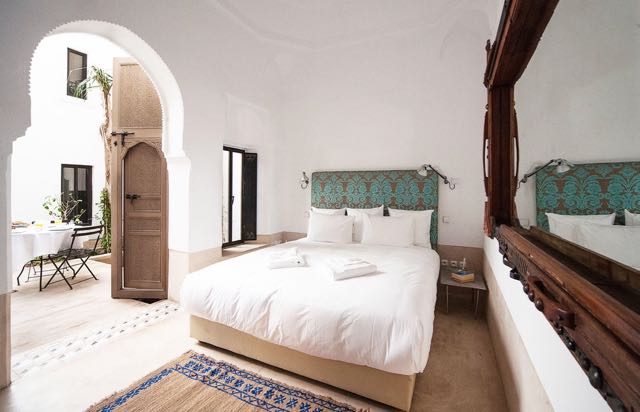 Small and romantic, the five-bedroom Riad Jaaneman is a fabulously luxurious boutique riad in the Medina. The courtyard is a haven, the roof terrace a wonderful place to while away an evening and you can see the Atlas Mountains from the balconies. There’s also the finest of everything. Double rooms start from around £175 per night, B&B. 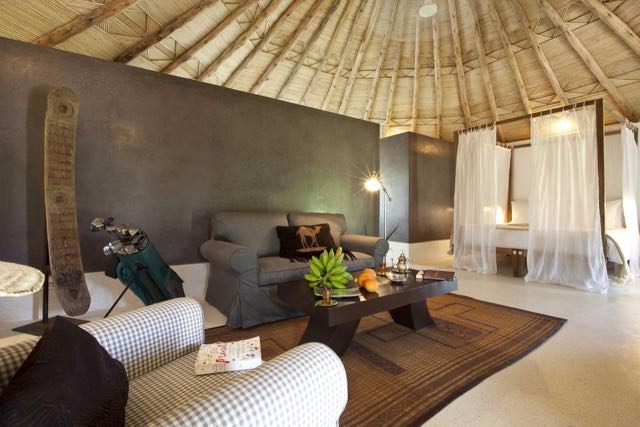 The Hotel Les Cinq Djellabas offers quite different accommodation: ten African-style eco-lodges arranged around an acre of olive-tree shaded garden. The beautiful pool is heated in winter, the restaurant a blend of Moroccan and international cuisine and the atmosphere is private and luxurious. Doubles start from around £210 per night, B&B.

Morocco for The Atlas Mountains
The Atlas Mountains rise green out of the burnt orange desert, a spectacular region which has become a playground for anyone who loves a bit of adventure in the great-big-outdoors. The Atlas Mountains are also where you’ll discover the purest form of Berber culture. Tiny, traditional stone villages cling to the mountainsides.

Kasbah Bab Ourika is in a stunning spot in the foothills of the Atlas Mountains. The approach is somewhat perilous, but when you get there everything is in impeccable taste and the view is serene. And the feeling is of staying in a friend’s fabulous home. There are just 10 individually decorated rooms set within a beautiful garden of olive trees, lavender hedges and rose beds. Double rooms start from around £135 per night, B&B.

Morocco for the beach
Essaouira spreads along a long, smooth, sandy strip of Morocco’s Atlantic coast, the kind of place you can easily imagine Peter O’Toole’s Laurence of Arabia riding in to off the desert. Except for all the windsurfers and kite surfers who love the constant wind. Essaouira’s port is still a vibrant fishing port and its medina still a busy marketplace. 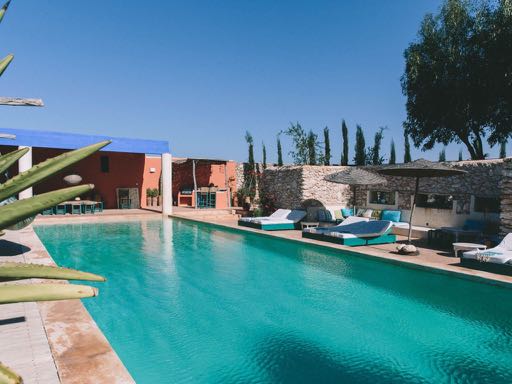 The Riad Baoussala is a charming, intimate riad just outside Essaouira, with two rooms, three suites and a cottage which sleeps up to five, all arranged around a pretty courtyard. The decor is traditional, the pool is heated, the food traditionally Moroccan, and the feeling is of being off the beaten track. But you’re not actually too far from the action. The rooms start from around £90 per night, B&B.

Practical Details
It always surprises me but it only takes about three and a half hours to fly to Morocco. British Airways flies direct to Marrakech, Casablanca and Agadir, all from Heathrow, while the Moroccan airline, Royal Air Maroc, flies direct from Heathrow to Casablanca and Tangiers. EasyJet flies to Marrakech and Agadir from Gatwick and Manchester, and Ryanair flies to Marrakech from Luton and Stansted. It’s even possible to travel all the way to Morocco by train – Eurostar to Paris, sleeper train through Spain, followed by a short ferry trip to Tangiers then you can catch the train through to Marrakech via Casablanca! If you’re looking for the cheapest option you might want to try flying to Málaga and getting the ferry.

Morocco is about the same size as France, so the weather varies depending on where you’re headed, but generally speaking the coasts have a Mediterranean climate, with hot, sunny summers and mild, wetter winters. In the middle band of Morocco you’ll find the Atlas Mountains and the Moroccan Sahara and here the temperatures can be extreme: in summer it can easily hit the high 30s or even 40°C, and of a winter’s night it’s often below freezing. Marrakech is in this central band and summer temperatures in the city easily make it to 38°C, but winter averages are at a very comfortable 21°C – so definitely one to hold back on until October through May.

About Us
The Hotel Guru has done your hotel research for you. We’ve commissioned a collection of leading travel writers and journalists to offer their recommendations on where to stay, found out all the important, and minute, details about each property, and then cross referenced that with guides we respect. So, if having a hot tub is important to you you can search by that, likewise pet-friendly properties and hotels with a great wine list. Click here to read about some of the other fantastic travel destinations we’ve recommended.