The Corran Ferry crosses Loch Linnhe from Lochaber to Ardgour and, though it only takes 10 minutes to cross, it makes this remote part of north-west Scotland – Mull and Ardnamurchan – much more accessible than going via Fort William. ‘Ardnamurchan Point’, one of my favourite sounds on the shipping forecast, and now I’m almost there! I was heading along Glen Tarbert, then down to Lochaline to get another ferry to Mull, then south-west across Mull to get a boat to Staffa and Fingal’s Cave.

This all sounds a bit of a last-minute rush, and it was. My lack of forward planning (‘I’ll just see where this journey takes me’) almost caught me out here because I had made arrangements that couldn’t be changed (seeing a friend of my mother’s near Oban and a visit to Eilean Shona) so I had to get to Fionnphort that night to get the first boat to Staffa the next day. 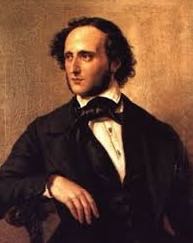 Staffa is a small, uninhabited volcanic island, part of the Inner Hebrides, where millions of years ago cooling lava formed into hexagonal columns which, under the arched roof of Fingal’s Cave, make the sea sound extraordinary, moody and melodious. Felix Mendelssohn visited Staffa in 1829 and was so affected by the sounds in the cave that he wrote his overture, The Hebrides, also known as the Fingal’s Cave overture.

It was raining as I drove to Mull, as it had done for most of the last two days, and the sky was heavy. I made it to Lochaline in time for the 6pm ferry, the last of the day, and joined a queue of cars and wondered where they had come from – I had hardly seen a car since Ardgour.

The first stretch of road from Fishnish is EU-new and I thought I would reach Fionnphort in no time, but after Craignure, where the ferries come in from Oban, the road reverts to single track. The landscape is vast open moorland patched with small plantations, small farms, and some smart Victorian stone houses – built as holiday homes I assume, and now many are B&Bs. The island is sparsely populated, the landscape dominated by big hills in the near distance which disappear into cloud. Because of all the recent rain, water was rushing down the hills white and furious, then filtering into peaty streams. There are some really big hills, Ben More close to Loch Scridain is 966m high. I stopped at Knockan near the loch for a little rest and to listen to the Archers (very poor reception!) and could see a mussel farm out in the water – the loch is so big it looks like the sea. 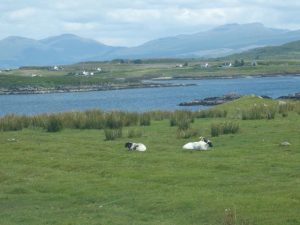 Can it really have taken me more than 2 hours to drive from Fishnish to Fionnphort? Almost. I didn’t arrive until after 8pm. I parked by the harbour for the night but having seen the daytime parking charges would move in the morning to the free carpark back up the hill. It was just Baa parked up for the night by the ferry terminal – a small building by the jetty with a café attached – though the parking bays for several coaches are evidence of the region’s popularity as a tourist destination. The wind was whistling up from the jetty but the rain had stopped, and the grey sea rushing into the bay had the boats out there straining at their anchors, hopping left and right. I had done my washing at the Kinlochewe campsite but hadn’t got it dry, so I draped it around the shelves and headrests, opened a window and went to bed, exhausted. I hadn’t done so very many miles, but they were hard won over winding, narrow roads, and it had rained on and off all day.

Rocked by the wind I slept well and the day looked much more promising when I woke at 6.30. I glimpsed sunshine and sky blue between the t-shirts and knickers hanging above me and wished I could send my children, Will and Hebe, a photograph, but there was no signal. After sorting the laundry, I watched the West Coast Motors bus leave at 7.30 (it must have arrived while I was asleep) and moved Baa to the free carpark. It took about 40 minutes on the Staffatours boat to reach Staffa. There’s a good landing stage and a path around the rock until you get to the entrance to the cave which is narrow and hair-raising, particularly if you meet someone coming the other way. As time goes by I find such things increasingly hair-raising. But Fingal’s Cave is the most amazing spectacle – sight, sound and well worth any angst I had to overcome. I didn’t fall in, and nor did anyone else!