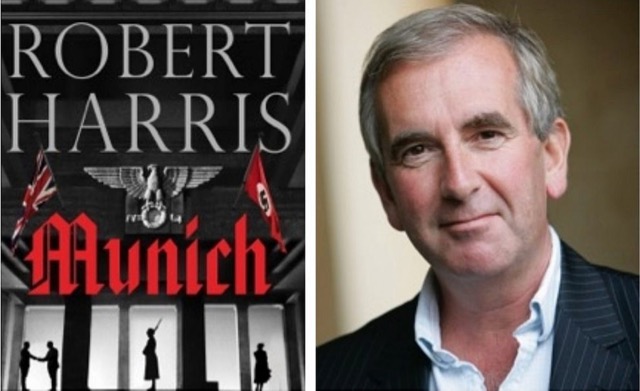 A week ago I went to see the film The Darkest Hour. A film I thoroughly enjoyed, especially Gary Oldman’s performance of Sir Winston Churchill. The film commences in May 1940. Neville Chamberlain’s resignation is demanded by the Labour Opposition and against all odds Churchill is chosen as his successor.

So it was against this backdrop I started to read for my book group Munich by Robert Harris.

Harris’s spy novel, Munich, is set in September 1938. Neville Chamberlain is Prime Minister and is fighting to secure a last-ditch peace deal with Hitler. Hitler at this point is threatening to invade The Czechoslovak Republic and force them to give non-Czechs major concessions.

Harris treats Chamberlain in a kindly sympathetic way unlike most historians. He makes an intelligent argument for a man who desperately believed he could avoid war. Although Chamberlain did install back up plans in case war was unavoidable.

Harris creates a thriller plot with in this scenario. There are two main characters. Hugh Legat, a private secretary to Chamberlain and a German Diplomat, Paul Hartmann. They had met previously at Oxford and were long lost University friends. They hadn’t met since those days. Hartmann is part of a group that is plotting to depose Hitler. He sees the meeting of the leaders in Munich as an opportunity to stop the treaty being signed and highlight to the British the dangers that Hitler will create if left in power.

The story of Munich is structured through the eyes of these two characters, Hartmann and Legat, allowing Harris to contrast high level politicking with the consequences of war for the people who will fight it. Both characters are flawed and that comes through as part of the novel but they both want the same thing, Peace.

The novel is very well written although the tension that can be created is limited as the outcome of the meeting is known: the start of the Second World war. As the film showed Chamberlain’s hard work and Peace Plan came to nothing.