A very long time ago, when I was an actress and mother of four young children, I advertised in The Lady for a nanny to look after the kids while I did a TV series. A charming six foot Kiwi girl answered the ad. She had been a policewoman in New Zealand but had decided to take a year off travelling and had just arrived in the UK having come overland on a London bus! This is the girl for me I thought – she could cook and drive. She licked my kids into shape in about a week… and then stayed for six months. We became firm friends. I taught her about the English class system (which rather confused her) and I encouraged her to travel all over England when ever she could. She, in return, taught me a lot about delinquent children and that Kiwi wine was really worth drinking!

I have of course been to New Zealand on many occasions, probably six or seven times, but always in their winter.  I have seen the glories of the wine district in Malborough, riding on a bike from vineyard to vineyard. I’ve woken in the morning to the sight of the sea and the magnificent landscape of The Bay Of Islands. I’ve even taken the ferry down to Stewart Island which is the furthest point south in NZ  – next stop the Antarctic. But I’ve never been to the Bay of Plenty, which is where I now find myself , celebrating my Kiwi friend’s husband’s birthday in Katikati. We have of course stayed friends … only 37 years have elapsed.

Well all I can say is the Kiwis CERTAINLY know how to party.

We started at 3pm on a sunny Saturday afternoon and finished at two the next morning! The average age was probably 70. We all danced and consumed an inordinate amount of alcohol and rocked the night away! My hosts had the good sense to book everyone in to the two motels in the area and have shuttle buses to take us all home. We ate spit roast lamb, pork and chicken, mountains of pavlova and chocolate brownies. That’s not counting all the homegrown salads, potatoes and breads. 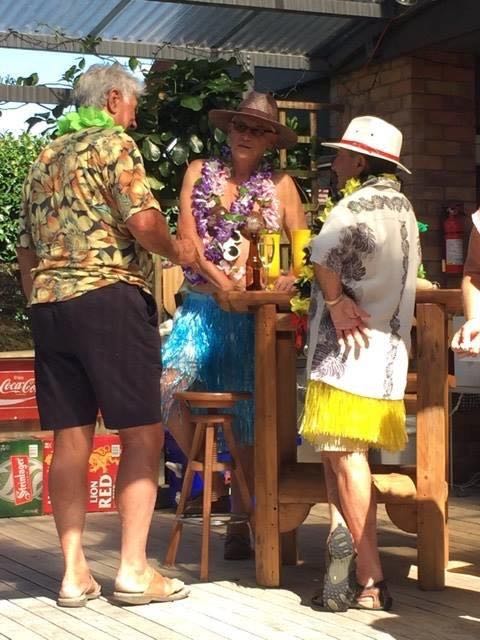 Not content with entertaining everyone for twelve hours, my hosts then met everyone again for breakfast. And by eleven we continued to party for another day. Who says the oldies don’t have stamina!  I danced with a man with dancing eyes and a big brown body – ex rugby player of course – who was more than delicious. I had to give myself a serious talking to, to remind myself I was a respectable granny! Enough of that…

Since the party my lovely hosts have driven me round to see some of the most spectacular beaches. The Bay of Plenty is full of them. And most of them are miles of white sand with an aquamarine sea. There are virtually no people on them. I have lain on the beach and watched horses being exercised in the water. Dogs racing through the shallows and children screaming delightedly as they fall out of kayaks and the water only reaching their knees. I have eaten in excellent restaurants. But even better, I’ve had a chance to sample the way of life here. No wonder this country is the number 1 destination for English tourists!

Firstly everything is so easy. The Kiwis drive on the same side as us and, joy of joys, masses of parking space. Nobody seems to be in a great hurry which is lovely as people still have time for conversation. It’s very pleasant to pass the time of day discussing the weather or how far we have travelled. Some of the names of the places are really hard for us to pronounce… but who cares after a couple of white wines! All the pronunciation is incomprehensible! I would never survive as a hostess here – there are no ready meals! I have always said NZ men are “can do” men. True some of them wear wellingtons and vests, but they can open beer bottles with their bare hands, change tyres, build their own houses and most of them can cook! 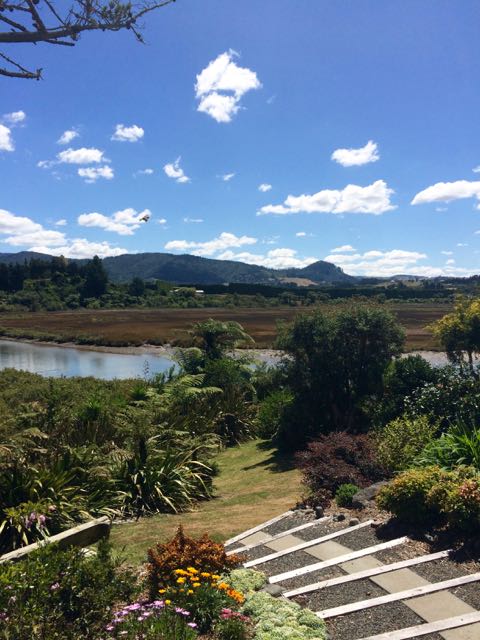 Of course if you want an outward bound type holiday you can do that too. The countryside is ravishing. And the North and South islands are so very different. You can ride mountain bikes up and down impossibly lumpy hills, swim or kayak across lakes, go camping and skiing. Something for everyone. The only problem with New Zealand is it’s so far away from our own dear shores!

If you haven’t been here I would urge you to visit. It really is worth the 26 hours on a plane. And I don’t say that lightly. The friendliness here is well known, the food and wine delicious and the vistas and choices are huge. Imagine whale watching. All Blacks watching. Eating fresh mussels. Or skiing and wine tasting. Or trekking and sitting in hot water holes on the beach. And that’s only scratching the surface. I think I’ll have to stop – I sound like the tourist board!

annabelandgracecw
•
Follow
It’s definitely the day for layering clothes and whilst these pics were taken outside on slightly warmer days we are now wearing our layers indoors. Gilets are the perfect top layer. I can work/cook/sleep in mine!! More details in our fashion post - link in bio. . Gilets, shirts, polo-necks, cable knitwear and jeans from @artichokegirls Annabel’s boots from @jonesbootmaker . #layeringclothing #layeringclothes #keepingwarm #keepingwarminwinter #keepingwarminstyle #winterfashion #winter2022 #annabelandgrace #annabelandgracemagazine #womenover60 #womenover50 #womenover70 #womenintheir60s #onlinemagazineforwomen
View on Instagram |
1/9

annabelandgracecw
•
Follow
Grace is making Dahl (recipe coming this weekend) in her favourite @circulonuk non-stick pan. Read all about them in her latest post (link in bio). . And before you ask: Grace is wearing red jumper by @kettlewellcolours Layering blouse by @me_andem Jeans by @artichokegirls Boots by @fairfaxandfavor All her own . #cookware #cookingpans #saucepans #nonstickcookware #circulon #reddahl #dahl #dahlrecipe #autumnfood #cookinginspiration #annabelandgrace #annabelandgracemagazine
View on Instagram |
2/9

annabelandgracecw
•
Follow
Colourful shoes or boots or neutral colours. What’s your preference? Luckily we found these green and pale blue boots from @pavers_shoes or the more traditional navy trainers and black boots from @jonesbootmaker It’s good to have a choice so should I go colourful or more practical? Just as an aside the Pavers boots were so comfortable and lightweight. Green jumper from @marksandspencer Polo necks, jeans, shirts & gilets all from @artichokegirls . #colourfulfootwear #greenboots #colourfulboots #fabfootwear #ankleboots #blackchelseaboots #popofcolour #funfootwear #annabelandgrace #annabelandgracemagazine #womenover50 #womenover60 #womenintheir60s #womenintheir50s #stylishwomen #stylishfootwear
View on Instagram |
3/9

annabelandgracecw
•
Follow
20% off everything on the @lookfabforever website so a great time to try out their newly launched eyeliners and lipliners. The perfect make-up range for us older women. . We are wearing polo necks from @lavenderhillclothing Annabel’s cardigan is from @me_andem . #makeupforolderwomen #lookfabulousforever #lookfabulous #lookfab #womenover50 #annabelandgrace #annabelandgracemagazine #womenover60
View on Instagram |
4/9

annabelandgracecw
•
Follow
Catching up with old friends - friendships that Covid put on hold but it was time to reignite them. It is these friendships that make our personalities. So Annabel went to see one of her longest-standing girlfriends in Toronto. And it was a double whammy as the Fall colours were just gorgeously vibrant. Read the full post on our website. . #canada #toronto #sisterhood #girlfriends #womensupportingwomen #womenover50 #womenover60 #onlinemagazineforwomen #catchingupwithfriends
View on Instagram |
5/9

annabelandgracecw
•
Follow
On a grey, wet Monday it is so good to connect with some of our followers and to meet some new ones when doing an IG Live with @janelovettcookery (have a watch of the video for some great cooking tips). If you are interested in our online magazine then do subscribe for FREE to our newsletter and you will receive two a week - a short one on Wednesday and the full one on Saturday. Link in bio for subscription. . #monday #onlinemagazineforwomen #annabelandgrace #freesubscription #womenover50 #womenintheir60s #womenover60
View on Instagram |
6/9

annabelandgracecw
•
Follow
Can’t wait to chat with @janelovettcookery on Monday (21st at 12pm GMT) as she always gives us some great cooking tips and general cooking inspiration. Do join us and ask any questions you want. If will be a fun hour. . #iglive #cooking #cookinginspiration #janelovettcookery #cookingtips #cookingclass #homecooking #cookingathome #cookingtime #cookingideas #cookingskills
View on Instagram |
7/9

annabelandgracecw
•
Follow
It’s competition time to win these three gorgeous items from the new @sophie_allport range. You just have to follow us on Instagram and then email annabel@annabelandgrace.com with the colour of the Robin’s breast. . #competition #sophieallport #homewares #win #robins #kitchenlife
View on Instagram |
8/9