So often our decision making is led by our appetites, and this time I mean the foodie one. And that’s how my husband decided we would be travelling to northern Spain this year. We recently enjoyed a really fantastic Spanish meal at the house of a couple who had been on a cooking holiday in northern Spain in 2016. And that’s all it took. Northern Spain it is!

Now it’s up to me to work out exactly where we will be eating and sleeping, and what else we might like to do besides. And that’s the bit I love! 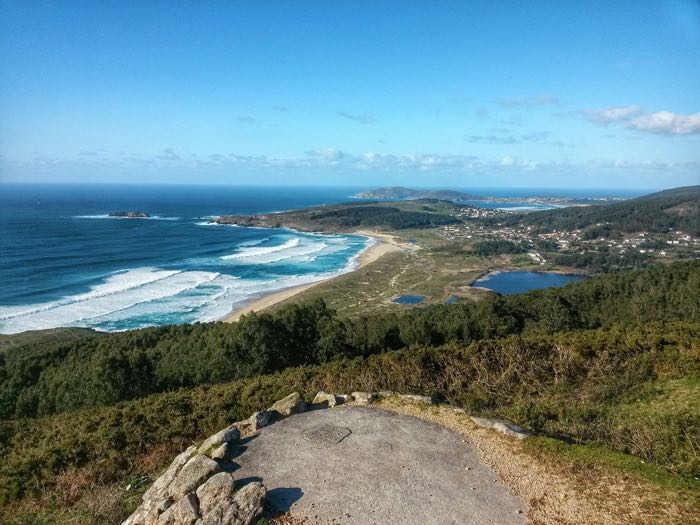 This beautiful, unique part of Spain, which has its own distinct dialect and culture, is best known for Santiago de Compostela and the pilgrimage route towards it. This magical city of glorious churches and cathedrals, linked by arcaded streets in pale stone, is a fantastic reason to visit Galicia, but don’t stop your journey there!

Venture towards the coast where the dramatic cliffs and smooth beaches alternate pleasingly, and pretty ports flourish, feeding some of Spain’s best seafood restaurants. Vigo and Pontevedra are particularly picturesque. Or venture into the interior, where you’ll discover vineyards and farming villages, or cultural hubs like A Coruña, home of the Tower of Hercules and medieval charmer, Allariz. 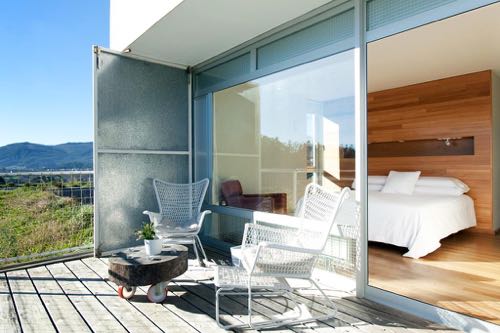 Right by the sea in Cariño, the Hotel A Miranda offers just seven generously proportioned guest rooms and suites with views of both the sea and mountains. Modern decor designed to complement the location really works – there’s plenty of light and space and fireplaces in the suites too. The best bit? Rooms start from as little as €80 per night including breakfast. 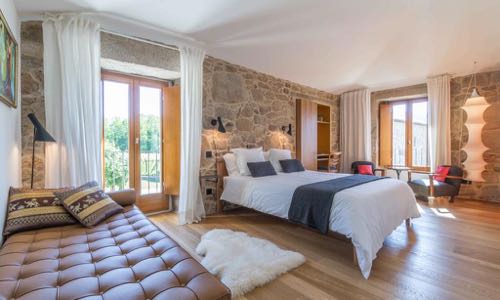 Or you could stay at Os Lambrans, a carefully converted farmhouse turned eight room hotel in the rolling Galician countryside, between the coast and Santiago de Compostela. The rooms are spacious and simple, yet elegant, with exposed stone walls and wooden floors. Accommodation is spread amongst three houses, so if you’re in a group you can book one to yourself. They also offer complimentary bike hire. Here too, rooms start from just €80 per night.

The Spanish often talk about Galicia as being cold and wet, but that’s just comparative, its climate is Mediterranean and its summers are warm and dry, with average daily maximums in the low 20s from June through to September. However, Galicia does tend to cool down quite quickly in autumn, and it does rain two days out of every three in winter, but it’s showery rather than downpour-y, and shouldn’t spoil a visit if you’re prepared for it. 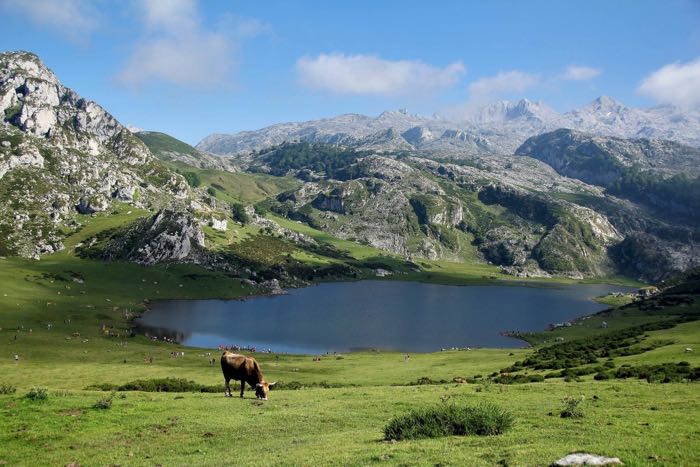 Locals claim the Asturias region is the REAL Spain, the rest is just land which has been reconquered. But Asturias, with its dramatic, rocky landscape and wild, green coastline, has proved difficult to occupy. As a result the Asturian culture has thrived off this pride. The region’s wild beauty doesn’t make it inhospitable though. On the contrary, this coastline is lined with hundreds of sandy beaches, and there are rolling green hills and valleys. Asturias’ unconquerable nature means the architecture is modest but ancient – much of it is pre-Romanesque. The region’s capital, Oviedo is easily walkable, with an old centre which was once encircled by a stone wall – this is where most of the major sights are found. Some of the region’s rocky interior is part of the dramatic Picos de Europa range, which is both beautiful and well loved by outdoors-folk.

El Gran Sueno is a boutique, five room B&B nestling in beautiful, natural surroundings, run by a friendly couple with a good eye for design. The chic, spacious interiors have seating areas and balconies looking towards the El Sueve natural reserve. There’s table d’hote style dining and an eco-friendly attitude. Plus you’re about 40minutes from both the coast and from the Picos de Europa National Park. Rooms start from €120 per night B&B.

Practical Details:  Asturias Airport is located in Castrillón and it’s traffic is mostly domestic, but there are some London flights during the warmest and coldest months. Outside of that you’ll need to fly via Madrid or Barcelona. The Asturias region is another cooler option as far as Spain is concerned, with summer highs in the low 20s. But the winters are mild, and daily averages rarely drop below 10°C.

The Basque Country is different. The landscape is more dramatic than the rest of Spain: the topography more varied and the coastline up against the Atlantic is rocky in a spectacular kind of way. Its cuisine is also different. And well known by even those with only a passing interest in food. And of course the culture is different. Which comes, in part from the region traditionally having its own language. If you’re just dipping your toe into this region then you should probably head for Bilbao or San Sebastián, both known for their food and strong Basque culture. But if you’re really exploring the region – and it’s certainly a rewarding place for the curious to travel though – then it’s worth finding a rural base, or several. 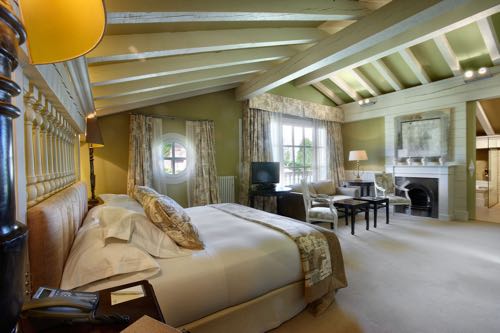 is a gorgeous country house hotel in a peaceful rural setting, but still close to the sea. There are just eight sumptuous rooms and suites, all beautifully furnished, and with enormous bathrooms. There’s also a lovely pool and terrace and expansive gardens. Rooms start from €210 per night including breakfast.

Practical Details: Bilbao is the best connected airport on the Spanish side of the Basque country. This is a large region with a long coastline and a mountainous interior, so the weather is pretty variable. And because there’s so much to do in the Basque country’s cities and towns, it’s considered a year round destination.

Logroño is the regional capital, and a burgeoning gastronomic hotspot. They’re big on tapas. It also has a beautiful, but stately cathedral, a prime example of La Rioja’s religious architecture – devotional but also very elegant. If you’re here for the wine, production is centred around the Ebro Valley, which is surrounded by dramatic, rain-cloud-catching mountain ranges. 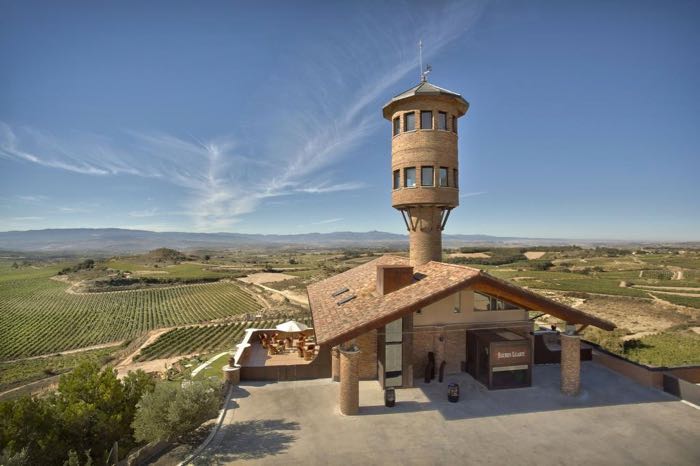 What could be more perfect than staying in a winery in Rioja? If that’s your idea of heaven, Eguren Ugarte is for you, a fabulous winery hotel with a wonderful lookout tower and stunning views around the surrounding vineyards. The interior design is modern with lots of natural night, and some of the 21 rooms have private balconies. Plus there’s a gourmet restaurant serving outstanding food matched with great wines, or another less formal option for more traditional fare. Rooms start from around €130 per night B&B.

Practical Details: Logrono is the only airport in the Rioja region, but you might be better off flying to Bilbao or Pamplona, as you’re more likely to find a direct flight. If you want to fit your visit into Rioja’s wine season, when you can either see fruit growing on the vine or fruit being harvested, then plan to travel between June and October.

For more fabulous holiday ideas, have a look at some of these previous suggestions from Hotel Guru.