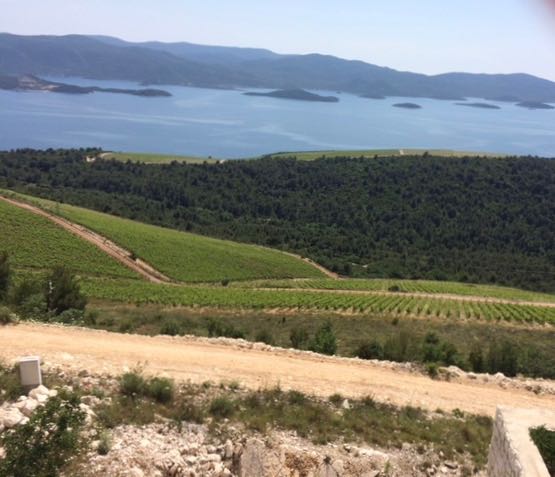 The two over 70 blondes continued meandering along the Croatian coast. We took the coastal road and it was circuitous to say the least. Two of us in an ancient VW polo. We stopped where we felt like it and our only fixed date was my flight back via Dubrovnik to Blighty.  I had a really important party to go to – Harry and Meaghan’s wedding on the telly! My companion is going to drive on alone and try and find the route her husband took in Greece with only a donkey as a companion thirty years ago.

As we travelled further south in Croatia we noticed that the prices increased a little. Still only £3 for a very nice glass of wine, but the Airbnb’s became more plentiful and there were certainly a few more tourists.

We drove along a spectacular if sometimes alarming coastline – vast drops and not very many rails! One day, as we were meandering and exploring, we noticed a battered sign advertising a winery. The clue was a bottle of wine on the picture and some Croatian writing. Since I long ago made it a rule to try as many wines on God’s earth as possible, we of course turned off the road. The GPS told us quite clearly there was a winery. 45 minutes later, having gone over hill and dale, and by now driving on a completely unmade up track with not a sign of humanity for miles, we arrived at an extraordinary farmhouse… with one of the most spectacular views ever.  Newly planted vines were in abundance and not a soul was about. We parked the car and, as they say in Australia, went walkabout.

Suddenly to our utter amazement we heard American voices. There in front of us was a huge terrace, fabulously expensive terrace furniture and a very charming English speaking Croatian girl asked us if we wanted to have tasting and lunch! Is the Pope Catholic I thought to myself… of course we did. Our fellow wine tasters were from New York. How on earth did you find this place I asked. Apparently they were on a bespoke tour. The wine was to die for and served with delicious Parma ham and olives and fresh Croatian home baked bread. The winery is so exclusive no one knows about it – and it was only our nose for the pressed grape that managed to get us there!

After a glorious tasting and the purchase of several bottles of the nectar, we attempted to find our way back by a different road. We felt that if we drove towards the sea we would eventually find the coastal road. Sensible, logical. We drove and we drove. I got out of the car and tried, unsuccessfully, to get a signal for my phone. I walked to the highest point to see if I could see any sort of track. The red polo continued on… spluttering and groaning. I wondered whether long grass could do any harm to the underbelly of a car and that we might run out of petrol. Of course neither the GPS nor our phones worked. We stopped and I scrabbled through my belongings to find the one map I had. Eureka – never be without a paper map – modern technology will fail you if you go off piste. The sea we had been aiming for was actually a vast lake (note to self, I must go to spec savers.) We pressed on in the hopes of finding a road which we did and twenty minutes later our nice GPS lady woke up from her siesta and continued to guide us. Lesson learned.

My companion and I have not had one cross word during our whole trip. We have had lots of laughs and fortunately she is extremely laid back. If you are going to travel with someone other than your husband/partner – whom I presume you know extremely well – it is advantageous not to be with someone who panics. It is also advisable to find someone who has the same taste in wine, so if you really do get stranded you can at least have a decent drink. Well that’s what I think. Other people might think it would be advisable to have someone with you who was capable of changing a wheel. It takes all sorts. You see I said I was blonde…

Dubrovnik. An amazing ancient fortress town. It is impossible to drive into the city as it is a no car zone. It is pretty unfriendly for people with bad hips or wheelchair bound. We were advised by our Airbnb hostess to leave our car at the cable car car park. It is adjacent to the main gate and drawbridge. Easier said than done! The car park was in evidence, but a spare space was not. Oh parking angel do not forsake us! With that a van drew out and we nipped in with all the speed of a hungry cobra. We couldn’t believe our luck. Then we tried to pay. Croatia is a closed currency, so you try not to have too much left as you are about to leave the country. We hadn’t bargained on having to pay for the parking in Kuna. Worse than that, when you put the money in you do not get any change so you have to have the right money. To make matters even more difficult they don’t take cards in the parking machines. Since we only had large notes left we were at a loss as how to pay. A helpful Croatian told us that you just go to any newsagent and you can pay, give the registration of your car and by magic it will all be done on computer. I handed over the money in the newsagent – roughly £60 in Kuna and got a receipt. The receipt itemised the time and the registration number. We took our little hand bags and made our way into the town. What a beautiful place – and so clean – the joy of no cars. It was like being in a time warp. Everything was old. 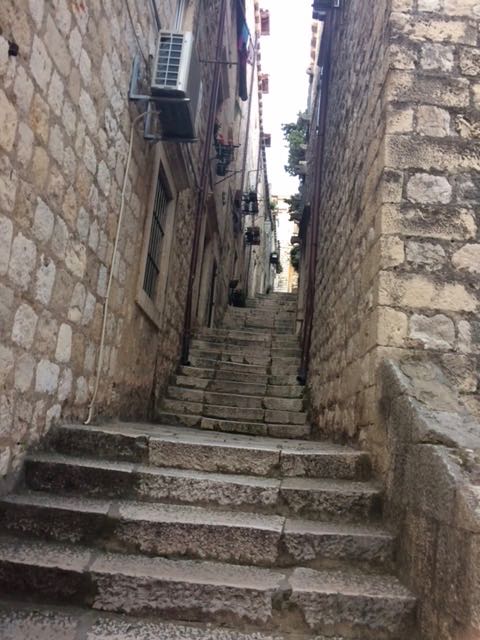 We had been warned that our lodging for the night had a lot of steps – 99 to be precise. No wonder everyone looks so fit. We found our little studio and set off to explore. Having seen practically no one during our entire journey down the Dalmatian Coast it was extraordinary to see hundreds of people and mostly young. The restaurants which spill across the roadways were full. Everyone was eating or drinking or talking and it wasn’t even a meal time! There was a wonderful buzz. 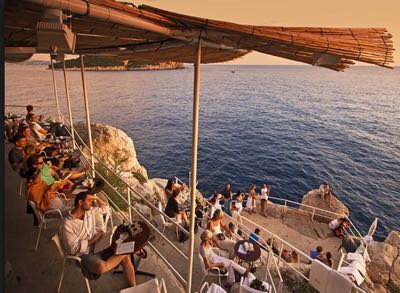 We had been advised to go to the Buza bar. It is very well known. You have to walk through the two metre thick medieval wall to get there. As you come out you will find tables and chairs perched on the rocks outside the city wall. It has the most amazing view. We stayed and watched the sun go down and congratulated ourselves on an amazing trip. Later on we booked to eat Bosnian food in a tiny but highly esteemed restaurant. We found people there who we had seen three days earlier in another restaurant; not only that, they came from Malaysia where my friend lives and we found we had friends in common! It is a small world. Back we trudged up the 99 stairs. Sleep. Next morning we had to leave very early. We trudged through the streets at 6am. The cleaners had already been out, the streets were pristine. We saw a lone nun come out of the church.  Not a soul was stirring. Out through the gate and drawbridge and into the car park. A large notice was slapped on the windscreen. Maximum fine. Approx £200. So much for technology! Thank God they hadn’t clamped us. I would have missed my flight. Lesson learned. Technology is wonderful most of the time – but have a back up. We are waiting for them to find us! And yes I have kept the receipt!

I did mention in my last  blog that we had been hugely entertained  by my darling gay friends. I have known them a very long time and they are always fabulous company and  have great gusto for living despite the tedium of growing older.
It was therefore more than surprising to me that when we set off one evening to find a gay club we were met with astonishment at best and revulsion, horror and silence at worst. Of course  these days, those of us lucky enough to live in the UK take our liberal values for granted, so I was very surprised at this reaction in Croatia. I decided to dig a little deeper – somehow it just didn’t sit right. I had noticed that there was very little, if any, drunken or raucous behaviour. I don’t remember anyone in Croatia being anything other than extremely courteous. I asked our landlady about this particular subject. Why  was it that there did not seem to be any gay community? You don’t understand she said. We have had war for a long time, it was terrible, we could trust no one. Now we just want to be quiet. We want peace. We want just a happy family life. No deviations or arguments of any kind.

Next adventure will be a little island in the Dodecanese called Tilos.