It may just be a roast chicken (albeit turkey) lunch but I think we all make a bit for effort on 25th December so instead of just roasting the parsnips, try this recipe which gives the parsnips some zing! 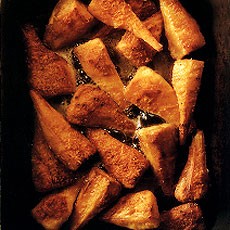 Combine flour, cheese, s & P in mixing bowl.  Peel the parsnips with a potato peeler. Then halve & quarter them lengthways & cut each length in half across so that you end up with smallish chunks.  Cut out some of the tough woody centres (I rarely do this as supermarket parsnips are normally quite small & tender). Pop parsnips in pan of boiling water, put on lid, bring back to boil & boil for 3 minutes. Drain and while still steaming drop a few at a time into the flour mixture, shaking and moving them around so that they get a good coating.Transfer to tray. Continue with all the parsnips. Store in freezer or fridge.

To bake: place large roasting tin in oven to pre-heat & in it put enough groundnut oil to cover the base and a knob of butter for flavour. When heated place the parsnips carefully in tin and tilt tin and baste parsnips. Bake for 20 mins, turn over and bake for another 15 – 20 mins or until they are crisp and golden. (They can be cooked under the roasting potatoes and will still golden up.)