Turkey is an extremely popular summer destination, with some glorious beaches and fantastic ruins and relics plus great food and a myriad of colourful towns and villages close to the coastline – but you know all this. You’re probably also familiar with some of Turkey’s ‘headline’ summer spots: Fethiye, Bodrum, Marmaris etc., but what I’ve been looking for is a quiet little place to stay for a bit of a hideaway. So I am going to treat you all to my choice of five peaceful hideaways in Turkey.

Now you are asking what I need to make it onto my list of five peaceful hideaways in Turkey.

I’d like to be able to see the sea – and have access to a fairly quiet beach. I’d like to be able to do things and see things when the mood takes me: I’m thinking a boat trip or two to a pretty port with a great little seafood place. A couple of really fascinating ruin sites to let my imagination ramble through, a local market or two, with maybe a few local galleries or boutiques. A challenging walk along cliffs, or up a mountain – for the mornings, so when I’m sedentary during the afternoon I don’t feel bad about it…

Of course the problem with finding this sort of place is that part of its appeal is that it’s probably small and a bit out of the way. So I decided to ask the Gurus… and of course they knew right away where the top five peaceful hideaways in Turkey are…

Private bamboo huts in Fethiye
Fethiye has one of the most beautiful natural harbours on the Turkish Mediterranean coast: it’s a broad, clear bay dotted with pretty islands. And it’s close to two of Turkey’s most beautiful beaches, Çal Beach and Ölüdeniz. The town itself is surprisingly small, and wonderfully atmospheric: Fethiye is probably the only town in the world where you’ll find sarcophagi in the streets – and they’re beautifully lit up at night. These Lycian relics, like the wonderful tombs cut into the cliffs above the town, give Fethiye a totally unique look and feel. Fethiye’s bay is an incredible place to be out on. Swim, sail, jet ski, kayak, parasail, paraglide – you might especially want to paraglide, the view of Ölüdeniz’s perfect lagoon on descent is spectacular. 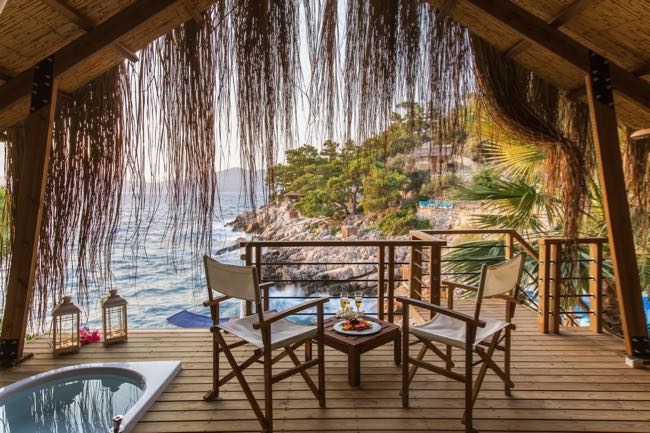 Where to Stay?
The Perdue Butik Hotel is a collection of eight private bamboo houses dotted throughout a little pine forest close to the cliffs overlooking a bright blue bay. Each house has a hot tub, balcony and wooden floors, plus the stunning views. The hotel has a private beach, and they’ll arrange a candlelit supper for you there, or on your balcony. Plus you’re very close to the Lycian Way. Suites from €380 per night including breakfast this summer.
Practical Details: During the summer months you can fly into Dalaman airport from Stansted, Gatwick, Luton, Manchester, Edinburgh and Glasgow airports, and then catch a bus to Fethiye. But out of season you’ll need to fly into Antalya. Fethiye is hot in summer, come June the average daily maximum is 29°C, but in July and August it’s 33°C. There’s also very little rain and lots of sunshine.

Let the sea recharge you in Kalkan
Kalkan is an enchanting little town in a spectacular spot on the beautiful Lycian Coast. The Mediterranean waters here might as well be the definition and gold standard of the word ‘turquoise’ the colour is so bright, and the town’s narrow, cobbled streets and whitewashed houses are perfectly arranged for maximum charm as they tumble towards the Med.. Kalkan has only really been on traveller’s radars since the 80s, so it still has much of its fishing village charm. Plus a new marina and a few larger hotels. But the vibe here is still very ‘independent traveller’, with small, friendly restaurants and small, family boat hire and tour businesses. It’s also a great spot for families. 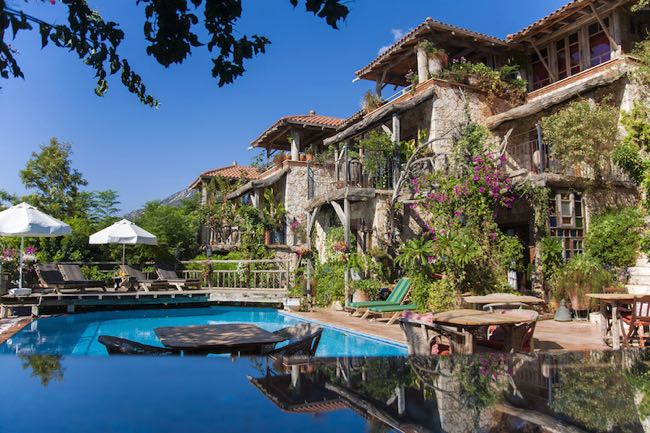 Where to Stay?
The Hotel Fidanka Houses comprises 15 rustic-chic suites arranged around a pretty garden courtyard bursting with greenery, and a gorgeous infinity pool. The views out to sea are recharging, they have an a la carte restaurant, but also have regular poolside barbecues, plus they do a lavish breakfast. Rooms start from a very affordable €132 B&B per night this summer.
Practical Details: The easiest way to get to Kalkan from the UK is probably to go via Fethiye – see above – from where it’s two to three hours away by road. The summer weather is similar to Fethiye too, with just a degree difference when it comes to the maximum daily averages – 28°C in June and 32°C during July and August.

Arty Alaçatı
Up until relatively recently Alaçati, and its beautiful bay with its long, shallow, flat entry, attracted only windsurfers and those interested in Alaçati’s history – it was part of Greece until the 1920s. But since the 90s it’s been attracting an arty crowd and the smart set has followed. For, as well as being beside a gorgeous stretch of the Aegean (one of the world’s best windsurfing destinations), and having a town so perfectly cobbled, whitewashed and bougainvillea-laden it looks like a film set, Alaçati is also cool. What preserves it is that it’s a couple of kilometres from the nearest beach – the windsurfing cove is about two kilometres outside town. To get to the most beautiful beaches you have to travel dirt tracks dodging the odd goat, and that extra challenge keeps the numbers down, so you can expect a decent sized stretch of sand to yourself. And you can’t say that about Bodrum.

Where to Stay?
The BeyEvi Hotel is a charmingly converted white house, with 15 rooms, all whitewashed with boutique-style decoration and original art, and there’s an excellent pool. Rooms start from €130 per night including breakfast.
Practical Details: Izmir’s Adnan Menderes Airport is the closest airport to Alaçatı, served by regular scheduled flights from Heathrow, Gatwick, Stansted, Manchester, Birmingham, Dublin and Edinburgh. From there it’s a 45minute drive or taxi ride, or you can drive from Istanbul in four or five hours. The average daily maximum for June is 24°C. Come July it’s 27°C, and August 28°C.

A room with a view in Bodrum
What you can say about beautiful Bodrum is that tourism is its cash cow, and more than a million visitors flock to its beaches each year. But it’s only in the last few decades that this fishing port and especially the outlying coastal villages have been associated with idyllic beach breaks and favoured by royalty and A-listers. The castle and museums, Ottoman era mosques, and laws restricting building works have helped to preserve Bodrum’s own character, stopping the fancy restaurants and bars from taking over. The preferred method of travel is by sail boat, or yacht, and the most popular meals are made with the freshest bounty of the sea – served in the city’s nicest restaurants which line the coast. 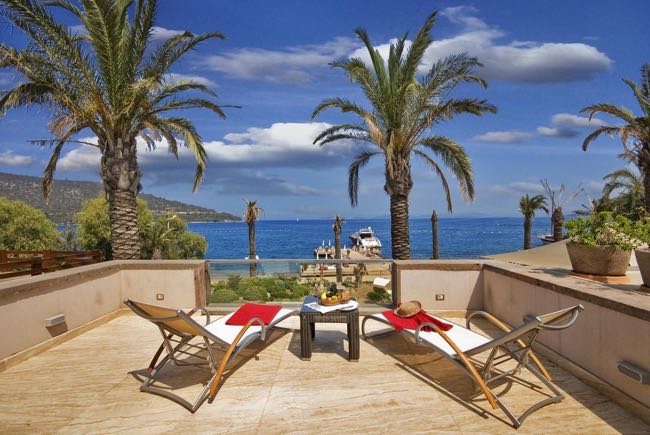 Where to Stay?
The Casa Dell’Arte is a stunning boutique hotel, right on Torba’s seafront. All of the 12 rooms and suites have a pale colour palette, private balconies, modern art, sea views and all the mod. cons.. As well as being close to the beach, guests benefit from an excellent restaurant and spa. Rooms start from around€200 B&B.
Practical Details: Bodrum-Milas Airport is 35kms out of town and has good international connections, but you can also arrive via sea from either Kos or Rhodes. Bodrum’s long, hot Mediterranean summers have well and truly started by June, when you can expect the daily maximum temperature up around 30°C. July sees 34°C, August 33°C and September has a daily maximum average of 31°C.

Direct beach access in Marmaris
If you are looking for a beautiful harbour sitting underneath a hulk of a castle and bobbing with wooden yachts, then look no further than Marmaris. Take a gület cruise all the way along the coast and out to Sedir Island, which has a collection of ancient Roman ruins, the highlight of which is an amphitheatre in the shadow of olive groves. Sedir Island is also where you’ll find Cleopatra’s Beach, one of the only places in the Eastern Mediterranean with golden sand. 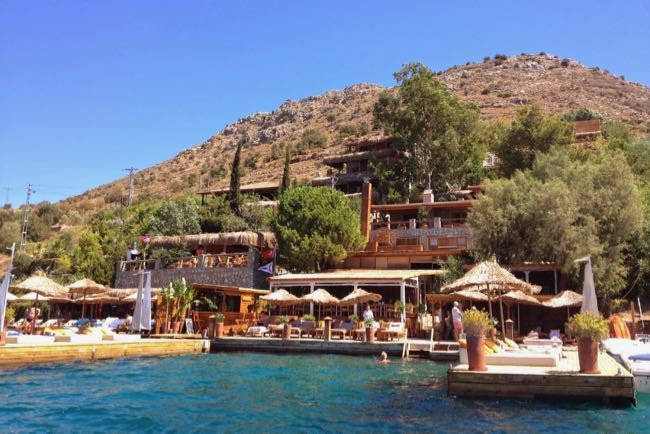 Where to Stay?
Karia Bel has just 12 rooms and suites, all with large balconies with sea views. The décor is boutique-y, with refurbished antiques and neutral tones with pops of colour. The hotel has a great seafood restaurant, direct and private beach access, and the opportunity to dine al fresco by candlelight. Rooms start from €160 per night.
Practical Details: Dalaman Airport is about 100kms from Marmaris, and there are a number of options when it comes to transfers. You can also arrive by ferry from Rhodes. Come June the maximum daily average temperature is 31°C, in July it’s 35°C and in August it’s 34°C.