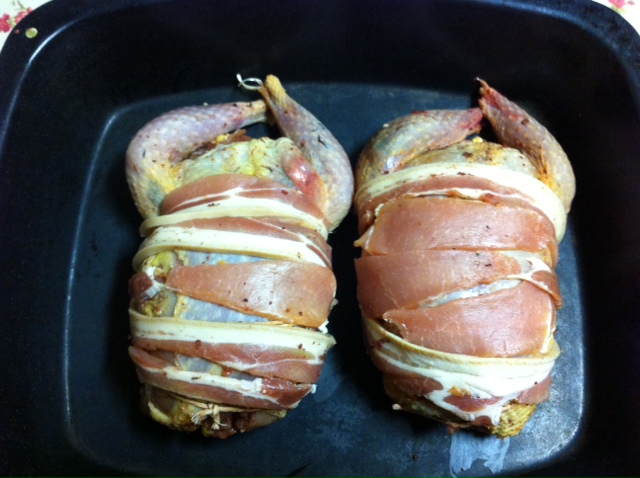 Christmas and New Year over and things at Margot HQ almost back to normal.  Christmas seemed to be smattered with endless family gatherings and I cooked feasts every day throughout the Christmas period.  Resting my oven gloves eventually, our New Year’s Day brunch consisted of fresh eggs from our hens and hot buttered toast.  A farmhouse breakfast fit for a Margot!  Despite not wanting to see roasted meats again for a while, I couldn’t resist sharing this little pheasant number with you as it was really rather a success on New Year’s Eve.  Fiddly to start with but worth all the effort for the resulting succulent pheasant.

a handful of dried whole cranberries

Now to remove the rest of the bones, the poultry scissors will be your best tool.  Cut into the wing just next to the bone, pulling the bone from the flesh.  Remove each wing gently cutting the flesh from the bones to keep as much meat as possible.

For the legs: Grasping the leg joint in your hand, push the leg back until the joint pops, leaving the top leg bone exposed.  Carefully cut the flesh from the bone and pull to remove the bone, leaving just the drumstick bone on the bird.  Repeat for the other leg.

Continue cutting away from the breastbone using a sharp knife.  Try to cut as close as you can, otherwise you will lose a lot of the breast meat.  Repeat on the other side until you can lift the whole of the carcass away from the meat.  Finally remove the wishbone that will be left.

Now turn your attention to the stuffing.  Mix together the sausagemeat, chestnuts and cranberries.  Season with salt and pepper.  Crumble the black pudding in a bowl.  With the inside of the pheasant facing up, press the crumbled pudding onto the flesh of the pheasant so that the middle of the bird is covered.  Repeat with the sausagemeat and press on top of the black pudding.  Place 2/3 sage leaves down the centre of the bird.

Pull the bird together so that it looks like a ready to roast bird, overlapping the back and tucking in any stray stuffing.  Using the string, tie up the birds.  This does not have to be surgeon standard – just trussed enough to hold in the stuffing.  Place the bacon across the tops of the birds over the string.  Drizzle the birds with olive oil.

Roast for no more than 1 hour in a hot oven, 200 degrees centigrade/gas mark 6.  Allow the birds to rest for 10-15mins on a clean plate with foil over the top whilst you make the gravy.  After resting time, pour off any juices into the roasting tin. Carve the birds up to the legs and then cut legs off in one piece.

a large knob of butter

Using the juices in the roasting tin, add the cider and allow to come to the boil.  Add chicken stock and reduce by half, stirring to allow the unctuous stickiness at the bottom of the pan to become part of the gravy.  Mix together the butter and flour into a paste and using a fork add to the gravy stirring all the time to prevent lumps.  Season with salt and pepper.

Serve alongside the carved pheasant with roast potatoes, honeyed parsnips and carrots.