Miranda's cock a hoop this morning

I am ‘cock a hoop’ this morning. I’ve just read that my nemesis, ‘the cashmere eating’ moth larvae is being dealt a significant blow. I cannot describe it as a ‘mortal’ blow as you need to be born first in order to then die. Soon these beasties won’t even make it past the twinkle in their father’s eye. The natural breeding cycle of certain moths has been severely curtailed with the help of a new pheromone spray.

The news, though highly controversial in my house, what with all the Buddhists residing here, is nevertheless a marvellous breakthrough. Actually, not one Lepidopterans (moth) gets hurt!

I can see a future for my jumpers. There’s light at the end of the tunnel, and not just showing through a favourite cardigan.

The idea is that male moths are tempted into entering a trap by the lure of female scent.

This smell signals that the trap will be full to bursting with hot girly moths, all wanting a one night stand immediately! Instead, it’s full of female pheromone spray, which then proceeds to stick to the male moth’s body. “Surprise!” 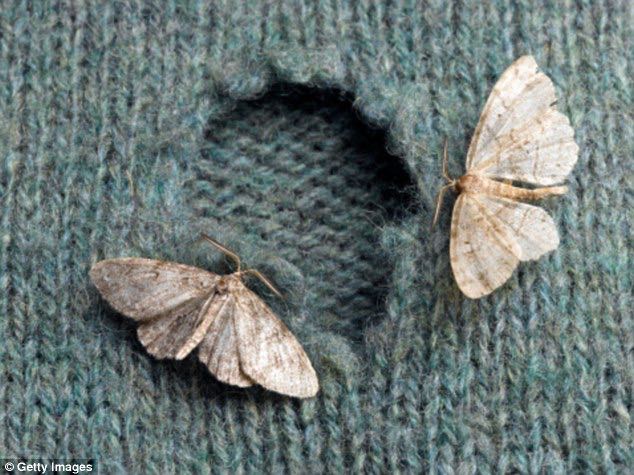 The females were fed up, decidedly miffed, unloved and not remotely broody. They decide that this mass rejection is untenable and throw in the towel (that would normally have been eaten by their babies). They make a group decision to forsake mating, having gone right off it and these strange male/female moths.

Moth population dwindles by 90%. All the moths fly out of the cupboards as the females don’t need to bury their eggs in my jumpers, whilst the males fruitlessly chase each other about, having come out the closet.

These moths only live for a few weeks anyway, so their small window of opportunity to multiply is spent coming to terms with their new sexual orientation. The male moths are busy getting their wicked way with each other whilst the females fly off on holiday, making the most of the little time they have left.

How great is that?

While we are waiting for this great event, have a look at some existing effective ways to get rid of those pesky cashmere munchers here.