I read last week that a nursing home in Dorset, Fairmile Grange, arranged a demonstration of pole dancing for their elderly residents. And no I did not go ‘Tut tut’ and follow in the footsteps (or, as is nowadays the way, the Twitter feed of those that did). I may have raised one small eyebrow (if you haven’t had Botox you can still do that) but then I got to thinking about it and thought how enlightened. My mother was in a nursing home for the last year of her life and quite frankly the entertainment left a lot to be desired. It would be enough to push me into the next world in the hope of escaping the dulcet tones of Vera Lynn which seemed to be constantly playing. Apparently it is the music of our 13 – 18 yrs that lingers on in our memory. That means that when I get parked in a nursing home by my children I will be blasted out with ABBA and Dancing Queen. I quite look forward to that and let’s hope, if most of my joints are still my own, I could spend my twilight days knocking out some crazy moves!

Back to pole dancing – if we take the sexual connotations out of it – and quite frankly I doubt too many residents of Fairmile Grange care home are worrying about that aspect of their life – then really it is a gymnastics display involving a fixed pole. I loved watching the ice-skating competitions at the Winter Olympics recently. I can’t ice skate and nor do I want to, but I can admire the skill and agility of those that can.

Fairmile Grange writes in their brochure that their USP is, “Making everyday extraordinary”. As my grandmother used to say that at 98 years of age, waking up was quite an achievement, so watching these pole-dancing gymnasts must be extraordinary. I admired the pole dancing team for setting their routine to Harry Belafonte tunes, so a nod to their audience. Prior to all of this the audience had been asked what they wanted to see and clearly pole dancing got a majority tick. Better than balloon sculpting animals which my own mother hated. She just about tolerated biscuit baking but meeting the zoo animals and having a snake draped around her neck was the limit.

Why do people believe that this form of entertainment, pole dancing, for the elderly is inappropriate? It is the same group of people that want us to grow old gracefully, wearing tweeds, twinset and pearls. Whilst the rest of us want to be disgraceful. We have spent the first 20 years being told how to behave, the next 50 years having to set an example to those younger than us so now, finally, it is the time to say, do and see what we want.

I remember my mother telling me one day that she didn’t mind listening to Vera Lynn occasionally but couldn’t they play some other music as well, and she was suffering from Alzheimer’s so she wasn’t brain insensitive. I therefore set up a little sound system in her room using my son’s old iPod – technology that she knew nothing about. I downloaded some other music for her, asking all the time if there was any music she wanted to hear, and taught her how to turn it on and off. A few days later when I was visiting, a nurse said that my mother seemed to be getting a lot of pleasure out of the iPod and was playing some quite “unusual music”. I went in to see her and found that she had found my 18 year old son’s playlist and was listening to his music which I had forgotten to delete. She loved it. Some of the tracks would have been deemed inappropriate for a lady of her age ie those by the Thought Police. She didn’t listen to it all the time but she was interested enough to hear these new types of musical sounds for a short while. 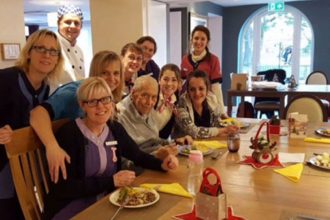 When I get old I hope someone won’t be policing what I should view and will let me continue to live and not stick me in a home somewhere where there is no stimulation and I die of boredom. Whilst the brain is not a muscle, it still needs to be exercised and balloon sculpting doesn’t necessarily fulfil that role!

I say well done to Fairmile Grange. I don’t know if the pole dancing is partly responsible, but I understand that there is a waiting list to get on the waiting list for a room at this home. It clearly is a popular and happy place to reside. They do not expect that following the pole dancing demonstration their residents will be demanding their own pole is installed so that they can practice their Split Grip Chinese Rubber Aysha. However they appreciate those that can perform this side splitting move! I hope my own children are reading this as they will be the ones that will get to choose my nursing home, and I hope they note that I want to go to somewhere like Fairmile Grange where every day has the potential to be extraordinary!