Portfolio careers & multi - hyphenates: why the working world is changing

A while ago, 55 year old Husband announced he was thinking of changing career. He had been doing the same old thing (and same old onerous commute) for over twenty years. I understood how he felt because I had been in the same position myself. There comes a point when you’d really like a change from your working routine. He had his heart set on a portfolio career – and that’s what he now has. Portfolio careers, multi-hyphenates, multi-jobbing – I can see why the working world is changing. If you are in the lucky position to transfer your skills to something fresh and challenging, why not do it? Life is too short to get stuck in a mind numbing rut.

Recently I have heard about a banker who has trained to be a plumber, a biologist who is now a carpenter, a lab technician who is now an illustrator. I was listening to Radio 4’s Money Box Live last week and they were discussing the subject of portfolio careers. By all accounts they were envisioned as long as 30 years ago ie an idea of the future where no-one had a job for life. It seems this prophecy is fast coming to fruition with only 13% of people seeing themselves doing just one 9 – 5 job by the year 2025. Interestingly the majority of multi-jobbers are women. But as many as 20% of British workers have a side project – facilitated by digital technology that makes it much so easier to set up a business. And this change to multi-hyphenated careers is really taking off – self employed people contributed £270 billion to the economy in 2017 (an amount that could fund our precious NHS for two years).

So Husband is a bit of a trailblazer it seems. He is also at home a lot! Actually we rub along very well – but that’s because he’s happy to get his own lunch! It is a bit of a sea change – I have less privacy for example (can’t eat five Kitkats without him noticing, that kind of thing) but increasingly he is going to his new office in London – but this time he commutes on the far less crowded ‘Chairman’s train’ as he jokingly calls it. No more rushing to catch early trains – he goes to London late and comes back to Sussex early. With three companies to run, he has greater job satisfaction, more freedom, a balanced and flexible life, he is motivated, purposeful and fresh. 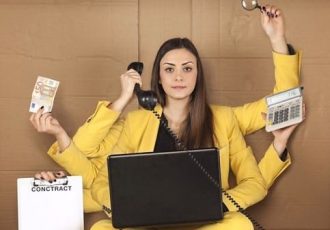 I realise we are lucky. Not everyone can afford to change their career midlife. Some people have to do multiple jobs out of necessity ie to pay the bills. One enterprising woman decided to rent out two of her three bedrooms in order to fund a career change. I know several women who are very talented but stopped working in order to have children; however, now their kids have left home, they are revisiting their innate skills and doing some fascinating things because they have the time and a reinvigorated inclination – although, to be fair, some have to juggle in their new adventures with looking after elderly parents.

So, perhaps you have things you have always wanted to do?  Well the good news is that you probably can. It is a myth that the over 55s are Luddites – we older women are great at using technology. Annabel and I knew zilch about websites and social media but, over the last eight years, have had a brilliant time learning about it and using that newfound knowledge to produce this online magazine for like-minded women. If we can do it, so can you!

As both Annabel and I now have husbands who often work from home, we had a light-hearted discussion about what it is like to have our husbands ‘for better, for worse, for richer, for poorer & now for weekday lunches’!!

You may well find The Multi-Hyphen Method written by Emma Gannon, a useful read. Click here for more info.