Portugal: definitely! But what kind of Portugal? / CountryWives online 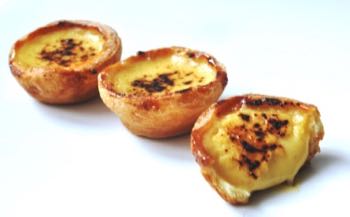 Is it just me or does it seem like everyone has been, or is going, to Portugal? All I seem to be hearing are tales of Lisbon’s charming trams, of its sunshine, and its haberdashers and tailors, and petiscos – which I am embarrassed to admit I have only recently been informed means Portuguese tapas. In my circle people seem to be falling over each other to claim they’ve had the most delicious pastel de nata – but were they in the medieval heart of sophisticated beauty Porto overlooking the ancient Duoro, or on a sunny square in Lisbon overhearing fado music, or an even sunnier beach bakery in the Algarve?

Other friends champion Madeira, for its dramatic landscape, beautiful seas, fantastic food, and of course more sunshine and pastel de nata. Others still favour the Azores, for the beaches, the whales, the walking and the sunshine. Others wax lyrical on the peace of the Costa Verde, or on sunny, sunny, sunny beach break classic the Algarve .

Great! Easy! Everyone agrees Portugal is fantastic, so I should definitely go. But where exactly? Do I fancy a beach break, a city break, or a break in the countryside?

Beach Break with a Little Something Different? 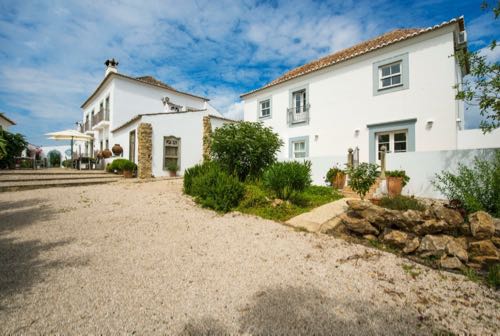 Where to Stay?
If you’re looking for the traditional Algarve, Quinta da Colina, just outside of Tavira, is ideal. This tastefully converted manor is set amongst hectares of peaceful olive groves and carob trees, and has a rustic chic pool converted from an old water tank. There’s a choice of B&B accommodation in the main house, or self catering in separate apartments. All have whitewashed walls and high, beamed ceilings, and a feeling of peace. This property ticks both beach (it’s only five minutes in the car to the nearest sandy beach) and countryside boxes. And it’s great value, with rooms starting from around €85 per night.

Practical Details: Tavira has more churches than it does hotels. This is what the Algarve was like before it became so easy to get to. Before the resorts and golf courses. Tavira’s port is crowded with fishing boats rather than day cruisers and instead of themed pubs there’s a Roman bridge and a ruined castle. This is Portugal at its prettiest and most charming: walls are bright white and roofs are bright red, and most days the sky is an impressively bright blue. Tavira was once the Algarve’s main port, until an earthquake caused the river to silt up, and now the town is just back from the coast proper and a beautiful, eight mile stretch of golden sand. In between is a fantastically biologically diverse lagoon, where, if you come at the right time of year, you’ll see flamingos flock.
Faro is the closest airport to Tavira (it’s about 40kms from town), and it is connected to a number of UK airports by low cost carriers. Most people visiting for the beach arrive between May and September when the area’s Mediterranean climate is at its hottest and sunniest. In July and August, the hottest months, you can expect maximum daily temperatures of 29°C.
Or 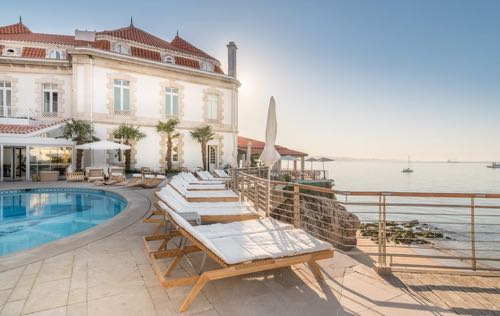 The Hotel Albatroz in Cascais qualifies for inclusion in both the beach and city recommendations. Its location, built on a clifftop right against a sandy, city beach, couldn’t be much better. The 52 rooms and suites are decorated in pastels and the best have sea views and private balconies. The pool is fantastic, and has great sea views too, and there’s easy access to the beach. Great for families and couples. Rooms start from around €220 per night B&B.
Practical Details: Just outside Lisbon, Cascais was one of Portugal’s first ‘holiday destinations’. In the 1870s King Luis started coming to this pretty fishing village from Lisbon, for the sea and the sunshine – and possibly for the seafood too. Since Luis first started coming, the village has chi-chi-ed itself up – it’s now a sophisticated little town with charming gardens and a number of museums. As well as several excellent restaurants. If you’re here for the beach Guincho is probably the most famous in the area. The Corso is where to head for a lively night out.
Lisbon Airport is 35kms to the east of Cascais. Easyjet offer direct flights from Gatwick and Luton, British Airways from Heathrow, Ryanair from Stansted and Tap Air from London City. From the airport, either take the Metro or the Aerobus to Cais do Sodre station and then hop on the train towards Cascais. The total journey time is just under an hour.
Summer is the most popular time for visiting Cascais, with maximum daily temperatures above 20°C from May through until September. July and August are the hottest months, and then you can expect maximum daily averages of 28°C.

What about one of the World’s Hippest City to Break in? 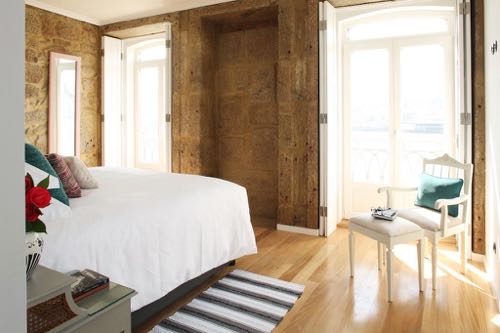 Where to Stay?
The 1872 River House in Porto, is a cosy, eight room mansion with gorgeous decor and gorgeous views over the Douro River. You won’t notice, but fire destroyed much of this pink waterfront mansion in 2014, but it’s all been beautifully renovated and remodelled keeping to the best of the original, unique room designs, and updating where necessary. The dazzling hallway with its stained-glass really creates an impression, as does the dining room with its free bar and the incredible breakfast options. Rooms start from around €180 per night.
Practical Details: Porto is an ancient city and port. Its Ribeira district has gloriously winding, cobbled streets, steep staircases and buildings with bright orange roofs. It’s also all entirely heritage listed. The rest of Porto is beautiful too, what with its fantastic markets, museums and gorgeous Baroque churches. And of course there’s the port (drink), which, even if you don’t fancy it too much, has shaped the look of Porto and its wealth since its inception, and is still produced only from the vineyards surrounding this city – the grapes growing plump on the water of the beautiful Douro, which flows through the city. The architecture and design of this city are worthy of appreciation too. And you’re not too far from the coast if you fancy a day out.
Porto’s Francisco Sá Carneiro Airport is just 15kms out of town and is fairly well connected to the UK, with regular flights to London airports. You can take the Metro from the airport to the centre of town, or it’s about €25 in a taxi.
Porto is a city with a mild climate, so it should be more of a year round destination, but it’s still most popular in the warmer months, between May and October. Even in January, the coldest month, the maximum daily average is 10°C, and even in the warmest months of July, August and September it’s still only 24°C.

Relax in the beautiful Countryside? 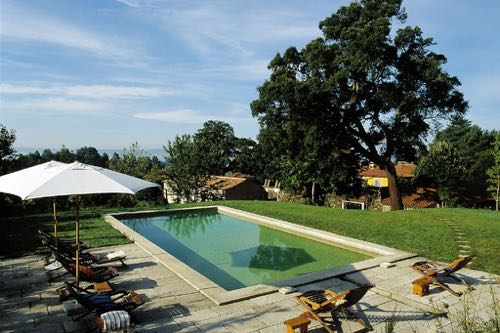 Where to Stay?
Quinta da Bouça d’Arques, near Viana do Castelo, is a gorgeously classic Portuguese manor house which has been carefully converted into eight chic apartments. The apartments in the main house are traditionally styled, with whitewashed backgrounds, while the apartments in the exterior buildings are super modern. The owners are very friendly, and the breakfasts, which are served in the rooms, are indulgent. Rooms start from around €138 per night.
Practical Details: Viana do Castelo is one of the prettiest towns on the Costa Verde and right on the coast, close to a number of beautiful, unspoiled beaches. The town itself has grand boulevards leading up to a medieval centre, and it’s still a working seaport wth a working shipyard. But if you’re here to escape the town, or even village, then you’ll be more interested in the lush, rural Lima Valley, where much of the local food is produced.
Porto’s Francisco Sá Carneiro Airport is the closest international airport (approx 70km to the south).
The best time to visit this area, if you’re here for sunshine and warm temperatures, is between mid-April and October.

Serenada Enoturismo is an elegant, modern, six room hotel within the grounds of a beautiful winery in the Alentejo region. Both the hotel’s design and decor complement the peaceful surroundings, and the views are magnificent. There’s a large terrace with a bar and a pool and a comfortable sitting room. Plus you’re just 15 minutes from the beach. You can arrange meals, and of course wines from the winery are served. Rooms start from around €115 per night B&B.
Practical Details: Warm and wide-horizoned, the Alentejo region’s beautiful, rural scenery, which changes colour dramatically with the light, is one of the reasons people love visiting this area. Life here amongst the vineyards, white towns and megalithic monuments is relaxed. Quite a bit of ground is covered by the name, though, from the Atlantic Coast to the Spanish border and the Algarve, so it’s varied. But there are beautiful, quiet beaches and virginal stretches of coast, as well as olive groves and cork forests.
Lisbon is the closest airport.
This region is ferociously hot inland during summer, so the best time to visit is probably spring, or September/ October.