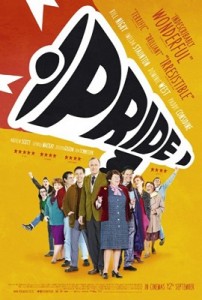 I may be a bit late telling you about this film, Pride, as I think it has had its run and certainly in Henley-on-Thames it is only showing a few times this week. However if you do get the chance then you must go and see this magical British made film, starring Imelda Staunton, Dominic West, Bill Nighy and a host of brilliant new and young actors including Jessica Gunning who features in those really amusing ‘See Film Differently with Volkswagen” ads that you get just before the main film and Freddie Fox, the next generation of the Fox dynasty.

Based on a true story, the film depicts a group of lesbian and gay activists who raised money to help families affected by the UK miners’ strike in 1984, at the outset of what would become the Lesbians and Gays Support the Miners campaign. The National Union of Mineworkers was reluctant to accept the group’s support due to the union’s public relations’ worries about being openly associated with a gay group, so the activists instead decided to take their donations directly to a small mining village in Wales — resulting in an alliance between the two communities. The alliance was unlike any seen before but was successful!

It made OH and I cry with laughter as it is a joyful and uplifting film but the scene-stealer is when Dominic West struts and gyrates to Shame, Shame, Shame in the Welsh Working Mans Club! Watch the video to get a flavour of the fun!