Am I in prison or what? / CountryWives online magazine for women

I’m pretty sure I’d survive a short stretch of prison really rather well. I’ve been pondering this meaty subject quite often, as we fly backwards and forwards to Sri Lanka.

My new coping strategy with the beastly long haul flight is to imagine I’m ‘doin’ bird’. Nothing could be as tortuous as flying from Heathrow to Columbo in economy seats. Prison would be breezy in comparison! 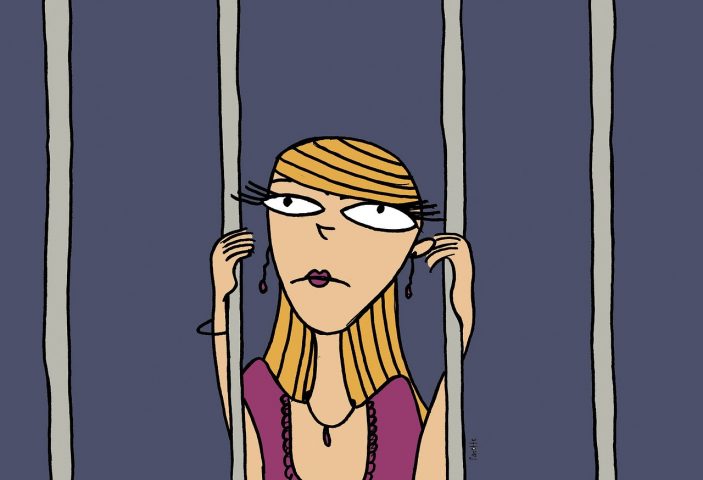 I hear that people who have been to boarding school adapt rather well to being ‘banged up’ in a cell. It’s much of a muchness, the same old rules apply, with which we are familiar. Just duck and dive, respecting the pecking order. Or not!

In prison, if you have access to legal advice (which you have obviously paid through the nose for), try sharing some with your fellow cell mates over a cup of tea – it’ll do wonders for your ‘street cred’. Writing love letters is useful, not to them but for them! This will be deeply bonding.

There’s loads of ex-public school boys, queuing round the block, writing about their happy days in the ‘slammer’.

Waving some oak-smoked salmon under a fellow prisoner’s nose might also gain you a few brownie points. I remember being asked by a friend (kicking her kitten heels in Holloway prison) if I’d kindly bring in something delicious on visitors’ day, in sealed vacuum-packed bags (mentioning she was partial to the gravadlax from Harrods). ‘Vacuum packed’ avoided unnecessary frisking (later) for the incarcerated one.

Talking of touching – one’s legally ‘touched up’ at airport security with monotonous regularity, or at least I am. Any reason (more often a forgotten lighter in my pocket) and here I go again, pulled aside for a little fondle. My boarding schools didn’t go in for frisking – it wasn’t ‘the done thing’ at all. Having said that, we had a dead-dodgy gym teacher … just saying!

Apparently the quality of food in prison is looking up, no end. Drones are delivering steak, amongst other things, to your cell window. The skies at night are positively humming with light aircraft on their way to the nearest penitentiary weighed down with take-aways.

Home-made vodka and drug parties are advertised in the entertainment section, according to press reports. People get very hot under the collar about this. But if the shoe was on the other foot? A few home comforts would be most welcome, admit it!

We had a chemist, of sorts, at school. She brewed up a filthy liquid that she insisted was alcoholic. She’d concocted it with the help of bunsen burners and test tubes. It bypassed any form of taste test, somehow. She also dabbled in drying dead leaves and rolling them into a spliff. No one could possibly get high, though you might get a chronic lung infection.

Obviously drugs aren’t voluntarily supplied on the Sri Lankan plane, though vodka’s on offer if you want to get trolleyed. The meals, delivered twice during one’s interminable flight, are beyond description, so no point trying.

The Prison Authority union wouldn’t dream of allowing ‘vertical sleeping’ in prison. Not sure Health and Safety would be that thrilled either. They normally have a view. There would be total uproar from over-fed, squiffy, rolling-eyed crims, with all their partying, if they couldn’t sleep off the hangover.

Boarding schools, on the whole, have beds that are reasonably horizontal.

However, the long haul flight to Sri Lanka is spent squashed in a fantastically small seat, sitting completely upright and you have paid to do this! That hurts! Add a chorus of screaming young to the mix…

Eleven odd hours later you are given an early release form, a ‘Get Out Of Jail’ card, parole …. call it what you like …. you are free!

Isn’t life just grand? Which is about the cost of that trip.