My oldest grandchild Rafferty had a book reading / sing-along session in his local library. We tootled down to get there on time, trailing bits of baby paraphernalia in our wake. I stood outside the little picket fence (guarding my youngest grandchild’s pram) whilst Rafferty went through and sat with his mother. This little fenced off area was within the children’s section of the library, well away from the rest of the studious reading public.

Rafferty wasn’t that keen on being made to sit and be quiet. He wanted to pull out the leaves of the books littered around him. This is not a good look in a library. It’s actually tantamount to treason.

The young lady in charge of proceedings started reading a book about a Crab and a Sea Anemone. There was another seawater creature involved but none of us ‘got that far’ to find out what it was.

The lady holding the book wanted to know what a Sea Anemone was and how does one pronounce it? This took a while to explain, needless to say.

Additionally, this girl wasn’t that hot at pronouncing her ‘R’s’ or ‘F’s’. As a family we have great difficulty with ‘R’ and ‘F’. My daddy wanted me to call my first child ‘Roger’ (whatever the sex) because he thought it would be highly amusing. Not much fun for the child but hysterical for us! “Wojjer, Wojjer… come here, Wojjer!”

So it became pretty evident that not much research or preparation had gone into this session, otherwise this librarian wouldn’t have randomly picked a book with creatures she hadn’t heard of and then selected nursery rhymes to sing that she would struggle with.

“Let’s sing ‘Here we go round the..’” Except it was interpreted as, “Here we go wownd the marby bush, marby bush.” 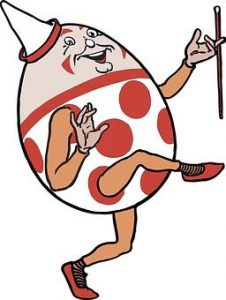 We managed one verse of most of the classic nursery rhymes that I know (or thought I knew). One verse was all that was needed to totally kill a good song. Everyone looked terribly confused except our teacher in charge. She was as happy as a clam, which could have been the missing sea creature…

“Wownd and wownd the garden, like a teddy bear, one step, two step..” Why on earth do our nursery songs have this fixation with the unpronounceable ‘wownd’, sorry, I mean ‘round’?
Meanwhile, my youngest unmarried grandson had to be picked up which I duly did. His mother turned. “What on earth are you doing, picking up the baby?” 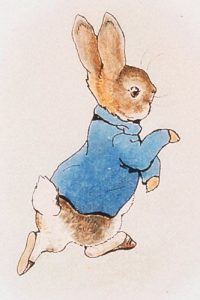 Oh no, she’s murdering poor old Beatrix Potter now! I was exhausted trying to interpret what she meant to say.

Most of the mothers had had quite enough… the kids were climbing over the picket fence, desperate to get away from this incomprehensible reading / singing torture.

The parents were stampeding the little gate to escape.

Soon nobody was left sitting in front of this woman, who was blindly oblivious to the carnage she was wrecking. She was having a ball, reading out loud to herself and getting paid. Great job!

The fact she was single-handedly crushing every gem we hold dear from our anthology of geniuses of the written word was beside the point.

My oldest turned to me and asked, “Is Lochie okay and asleep?”

“He’s not choking at the moment, if that’s what you mean. Though I don’t know why not after all that!” I muttered.