There is nothing like the addition of a fluffy little puppy to a household and our new one, Kobi, is no exception. He is adorable, loving, mischievous, playful and has very sharp teeth – so just as you imagine every puppy should be. He is the centre of attention in our family and our other dog, Barney, is starting to love him – it was not instant and his Spaniel ears bear the scars of Kobi’s apparent displays of affection. So there’s lots of puppy love at our house. 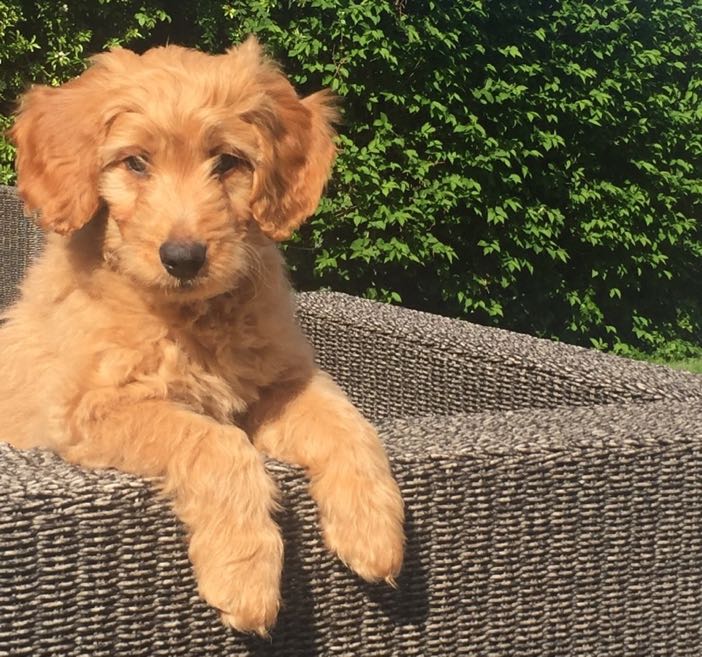 Getting dressed in the morning is simple – wear my oldest trousers as little teeth tend to constantly snap at the back of my legs. When Kobi arrived 2 weeks ago I could out-run him in the garden and consequently exhaust him so that he would fall into a deep and peaceful sleep giving me time to do other things. However he can now out-run me and thinks the whole exercise is a game whereby he has to catch me and hang off a limb!

My youngest son has decided to revise for his uni exams at home so that he can get good food and bond with the pup and maybe not in that order. So the added bonus of Kobi is that everyone wants to come home to see him – it is simply amazing the pull that such a small pup has.

My garden is suffering as Kobi feels that just sniffing a new bloom is not enough and he has to pull all the petals off, chase them as they blow through the garden and then bring the remains of the plant, a nude stem, and lay it at my feet. His weeding skills are equally untrained, as, whilst I pull a weed and pop it in my bucket, Kobi takes it from the bucket and re-distributes it around the garden! 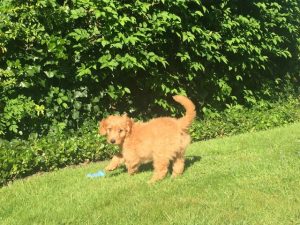 My OH, who put up the most opposition to this new family addition, is the most besotted and is first to leap out of bed at 5.30am to let him out. It is quite incredible how such a small ball of fluff can mobilise a household and melt the hardest of hearts. It only took 2 weeks to house train him and he is quick to learn most things. Although we have a slightly gentler form of tuition than our male swan who, on seeing Kobi sniffing a little too near to his wife’s nest, drew himself up to his full height, extended his wings and flapped them so hard that it made Kobi turn and run as fast as his legs could take him, falling and somersaulting until he found the safety of my legs. Suffice to say he has not been back to that part of the garden again – lesson learnt!

Kobi has done ‘just what it said on the tin’. That is he has brought enormous pleasure and love to a family who had had a rough year losing a grandmother, a close and very young friend and finally our older dog of 12 years. Kobi has been worth every penny and every little puddle!