I feel as if there has been a tornado through our home over the weekend and it came in the small size of an eight week old puppy, Kobi, swiftly followed by my rather larger children and their friends, and in between my own friends also dropping by. It is amazing how appealing such a small pup is. As Kobi resembles a lion cub – much like Simba from the Lion King – then there seems to be double appeal. Maybe that is why he is called an Australian Double Doodle.

I should have invested in kitchen towel as it is never far from me just for that ‘little accident’. The problem arises because we have wooden floors and since we also have decking just outside our garden doors I don’t think Kobi can differentiate between inside and out. It wasn’t helped that we had a baking hot weekend so all the doors were open so there was no obvious door opening to show that he is now in the outside world where he can wee. 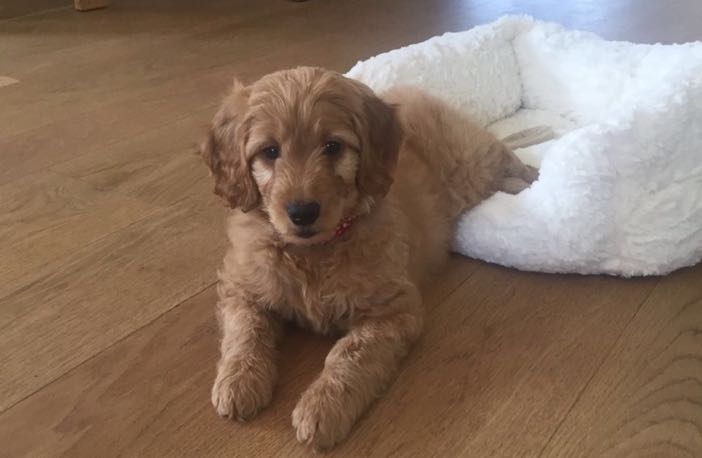 Having said all of this he is so delicious and has the most endearing face that I find myself wasting hours just watching him as he tumbles around the house and bounces like a rubber ball off the walls. He tests everything out with his little razor sharp teeth and is learning that there is a word ‘No’ that is used very frequently around him. He may even think his name is No as it is said so often.

Then there were my kids and their friends who needed constant food, much like the pup but with more variety. They too seem to bounce and tumble around the house adding more mayhem to my mini tornado. Eldest son decided to choose Sunday to introduce the family to a potential girlfriend and I am not sure how well that went as we spent the day rushing around mopping up from Kobi and trying not to let him sink his teeth into any of the female guests as they sunbathed in bikini tops exposing a fair amount of appealing flesh (to a pup).

Apart from this role of mother to a puppy, my other was to be in the kitchen and churn out never-ending meals. My daughters always want me to bake when they come home. However as they are both being very healthy I decided to try them out with a recipe for the best chocolate fudge cake ever from the Good Life Eatery book which substitutes flour with courgettes! It went down a storm and there is not a slice left today. No bad thing as with broken nights’ sleep, due to Kobi, I am tending to reach for the treat tin for a quick energy boost and if it is empty (unlike my puppy’s treat tin) I have to go without. 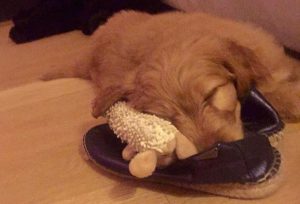 As I type the aforementioned one is fast asleep at my feet – like all babies he is so adorable when asleep – but the naps don’t last long or not long enough!!