Who Gives A Crap? The Toilet Paper That Helps Save The Planet

In July 2012, Simon, Jehan and Danny launched Who Gives A Crap with a crowdfunding campaign on IndieGoGo. Simon sat on a toilet in their draughty warehouse and refused to move until they had raised enough pre-orders of toilet paper to start production. 50 hours and one cold bottom later, they’d raised over $50,000.

Did you know? More people in the world have mobile phones than toilets. Think about that next time you’re texting on the loo!

The story behind the company

Simon, Jehan and Danny wanted to launch Who Gives A Crap when they learnt that 2.3 billion people (roughly 40% of the world’s population) don’t have access to a toilet. Around 289,000 children under five die every year from diarrhoeal diseases caused by poor water and sanitation. That’s almost 800 children per day, or one child every two minutes. Luckily, toilets are proven to be a great solution – they provide dignity, health and an improved quality of life. And in case that wasn’t enough, it’s been shown that a dollar invested in sanitation yields $5.50 in increased economic prosperity. Toilets are magical!

They delivered their first product in March 2013 and have been thrilled to keep growing ever since. Who Gives a Crap toilet paper is gracing bathrooms across the country and they donate 50% of their profits to help build toilets and improve sanitation in the developing world.

Who they donate to:

They’ve donated to WaterAid Australia, Sanergy, Shining Hope For Communities and Lwala Community Alliance — incredible organisations with deep experience and skill in implementing high impact sanitation projects throughout the developing world. To date, they’ve donated $1.2m Aussie dollars (that’s the equivalent of over £650,000) which is enough to help tens of thousands of people in need, and they’re just getting started!

Though they’re still growing, and now make more than just toilet paper, they always want to stay true to their roots: toilet humour and making the world a better place!

Most toilet paper is still made with virgin trees. Not only are we cutting them down, wiping our bums and flushing them down the toilet, but we’re consuming loads of energy and water along the way. At Who Gives A Crap, all of their products are made without trees, so they’re being kind to nature too. Trees should be for hugging, not wiping! 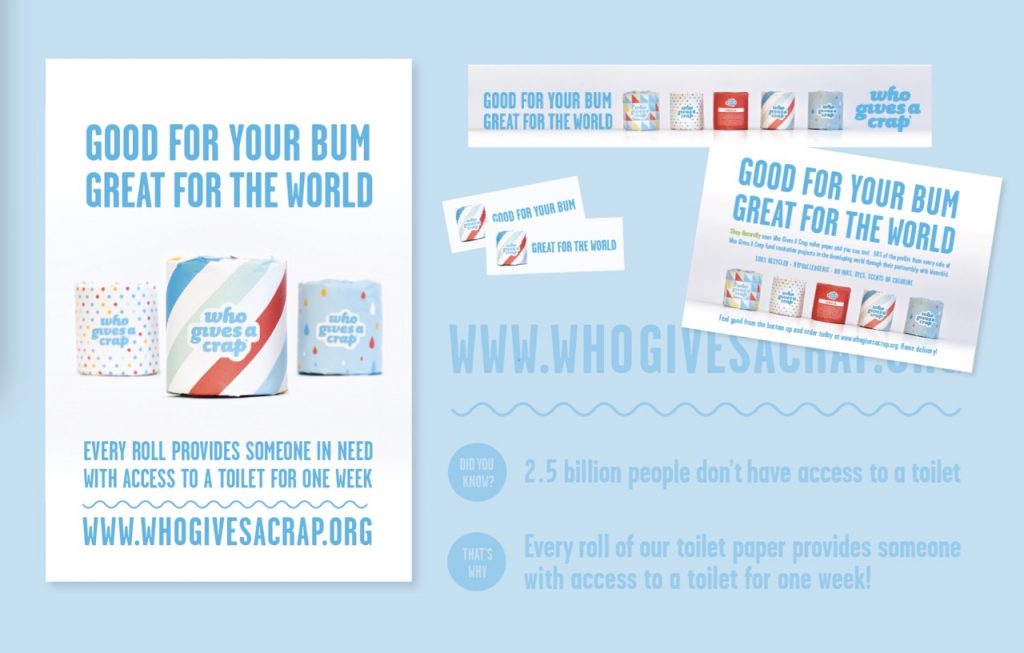