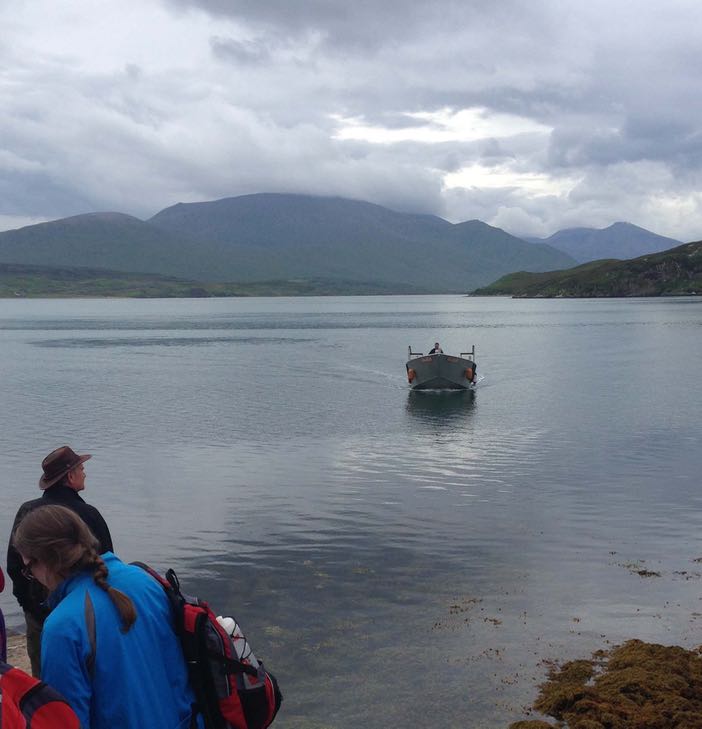 the Kyle of Durness for our excursion to the Cape Wrath Lighthouse. Visitors can’t just decide to visit Cape Wrath alone; it’s owned by the Ministry of Defence and used for firing practice, so you have to join a supervised tour.

We crossed in about five minutes and we were met on the other side by a cheery man called Stuart who drove us in a 4X4 the 11 miles up to the lighthouse. The journey took almost an hour, passing two or three deserted cottages, up and down over moorland along a rugged road that was first put down in 1828 when Robert Stevenson built the lighthouse.

The sky was grey and overcast and I had the wrong shoes on for inclement weather – thin canvas ones, no socks, and my horsefly-bitten foot felt increasingly uncomfortable. The rain started as we were getting near and by the time we made the final assault on the lighthouse, and had to climb out of the damp warmth of the 4X4, the bad weather really had set in.

There are a few lighthouse keepers’ cottages and outbuildings and a café. Stuart said the lighthouse keeper’s wife made excellent cakes, and we would be leaving in an hour. At this point the malaise I had felt creeping up on me for 24 hours (since the horsefly bites began to throb and the man with BO on the Kyle of Tongue asked me if I was all right, travelling alone) took a grim hold like the weather. 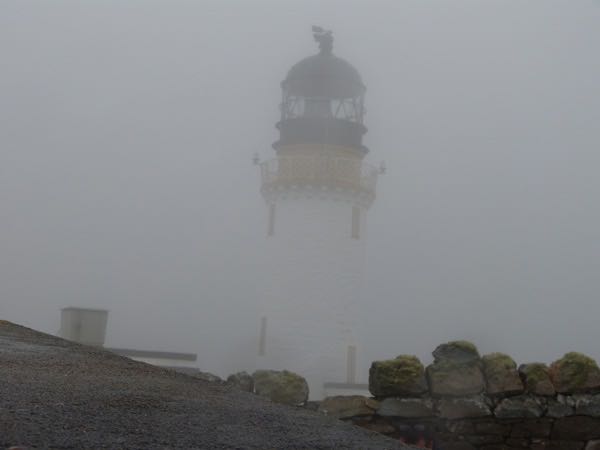 We all looked around for the lighthouse, and then realised we were practically standing under it. It is very impressive and stands 20m high on a rocky headland, but on such high ground that it is often shrouded in mist. On the far side the cliff falls straight to the sea, though obviously but we couldn’t see it. I wandered around in the rain for a bit and then went in for coffee and a slice of Mrs Caretaker’s excellent coffee and walnut sponge. The little café was steaming and almost filled by our party, all complimenting the Caretaker on his wife’s cakes and probably wondering how on earth you exist up here, just two of you. She must love baking and I suppose can get all her ingredients from Durness… it would be a crying shame if she got all the way back up here and realised she’d forgotten the walnuts. We were glad to see Stuart and head back to Durness.

By 2pm I was back on the A838 and heading south for Scourie. South! This change of direction was a momentous part of my trip, but one I barely acknowledged as I was on a mission to find a doctor. A lady from Bridlington who had been with me at Cape Wrath had looked at my foot and said “When lines start streaking up your leg like that it could be infected…”

We were miles from anywhere, the health centre in Durness had been shut and I was feeling very sorry for myself. The road to Scourie through north-west Sutherland was for the most part ‘single with passing places’ and the scenery was desolate, with big hills to the left – the terrain largely rock, with sparse patches of grass growing where it could to feed a few sheep. Waterlilies floated on inland lochs so inky deep they looked black, and enormous sea lochs fringed with sand cut into the coast on the other side. But the drama of the landscape was a little lost on me as I tried to imagine how I would cope with an artificial limb.