The night before I went to Sanday I stayed in the car park at the harbour. I was going as a foot passenger and wanted to be sure of getting a space for Baa. Sanday is at the top of the Orkneys, only North Ronaldsay lies beyond it, and, until I went to the Shetlands, it was as far north as I have ever been in Britain. I was going to visit Fenella (a friend of a friend) and her husband Steve who farm there.

I slept pretty well though I don’t much like staying with street lights overhead: it makes me feel exposed, and heavy rain drummed on the roof all night. But when I set off to buy my ferry ticket, as the office opened at 9, the rain had stopped, and the car park was filling up fast. Just next door to the ticket office in the harbour car park is the most state-of-the-art, spotlessly clean, stainless steel loos.

There were about 20 passengers and three cars on the ferry, and a vast Charolais bull who snorted through the vent in the side of his trailer. I talked to a young German called Eugene, an electrician with a company called Voith who have one of the test sites off Eday (our first port of call) harnessing tidal power 30m under the sea. He worked there one out of four weeks, the rest of the time in Stuttgart, and said there isn’t a lot going on on the island. It has one pub, but it isn’t open every day! Eugene said they are a long way from making tidal power viable, but there are several companies researching the possibilities. 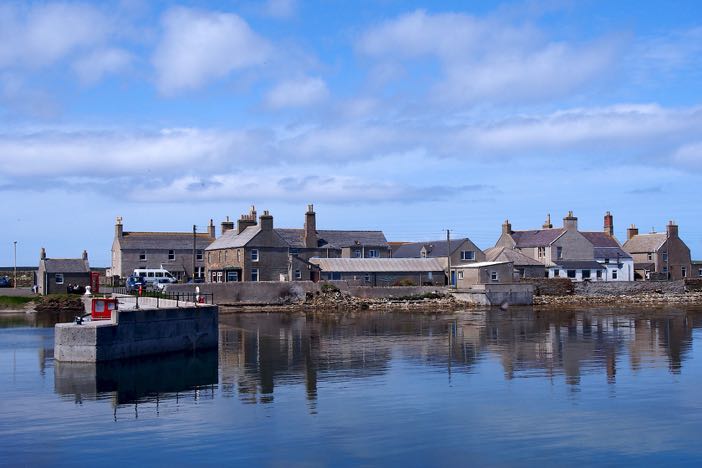 When got to Sanday, Fenella was at the harbour to meet me in her Land Rover and we set off for the farm at the other end of the island. It is shaped like a starfish, low, and dotted with a few small farms and crofts (not a tree in sight) and fringed with wonderful beaches. The rain started and didn’t stop all day, but their house is warm and comfortable (an Everhot!) and you need a cosy home living so far north. The climate is harsh and the winters are long. Fenella said they have winter and summer, but not much autumn or spring; when they finish the harvest late in September they are plunged straight into winter and, soon, the sun isn’t up before 9am and it’s dark again by 4pm. You’d need a positive attitude and plenty of vitamin D. In summer there is 20 hours of sunlight and they are often out bale carting after midnight! (This was July… I was just unlucky with the weather.)

After lunch while Fenella waited for the vet to come and check her cows, Steve drove me to see a Neolithic site he has been working on with a group of people, and then we went to a restored croft by the Heritage Centre which has two rooms and was lived in by a family with 13 children! It’s hard to imagine how tough those people had to be, let alone how it was possible to live in such a tiny house. 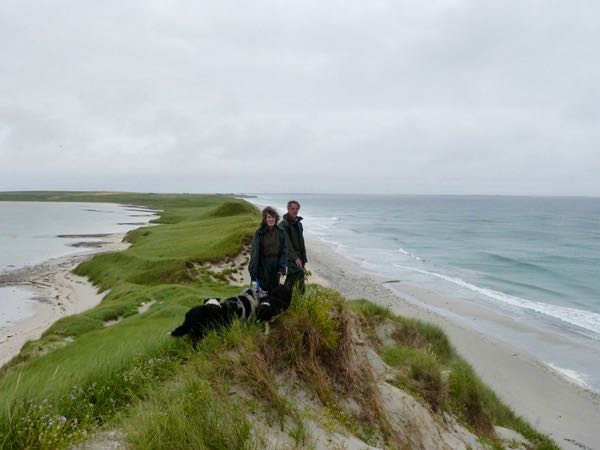 When we met up with Fenella and her dogs to walk over the dunes onto Tresness Beach the weather had taken a dramatic turn: the sea was crashing on the shore and the wind blew the sand and rain in our faces – it was most exhilarating.

We saw Great Skua (Bonxy) and its cousin, the finer and more elegant Atlantic Skua, and Fulmers flew overhead. They look like large gulls but are bigger with long, stiff wings and are related to the albatross. One was bobbing about in the rough surf, unable to get up. Their wings can make it hard for them to get airborne and this one was definitely suffering from waterlogged wings and needed another Fulmar to shunt it out of the water. Steve said that if you see a Fulmer in the road you should pick it up and throw it in the air to get it airborne. 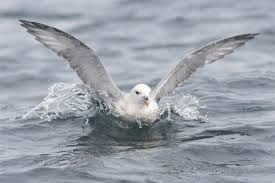 But you must be careful, because as a defence mechanism they will spit a vile concoction of stinking, oily gastric juices at you. They’re very accurate and you’d probably have to burn all your clothes!

Back on the ferry I went straight to the bar – and had a cup of tea while watching a veterans match from a sunny evening at Wimbledon!