Round Britain with Baa: Cromer / CountryWives

I had said to the man who showed me round The Colchester Oyster Fishery that I wanted to go crabbing when I got to Norfolk and he suggested I give John Davies a call when I got near Cromer. John said yes, he would take me out – I should come and find him at the May Bank Holiday Crab & Lobster Festival. John is a real Cromer man; he works there, has a shop there and is the coxswain of the Lifeboat. He is, as a local told me, a bit of a legend. I found him talking to a crowd at a cookery demonstration. When the festival was over he would take me out early the next morning – I should be on the quay at 3.30am and I could park on the ramp outside the little lifeboat shed the night before.

The fishing boats were lined up on the beach, attached to their tractors ready for the morning, and I went to bed at 10pm with my clothes ready and my alarm set for 3.15. But I was so over-excited and nervous (that my alarm might fail, and what if I needed the loo on a small fishing boat?) that the sound of the waves on the shore did nothing to lull me to sleep… 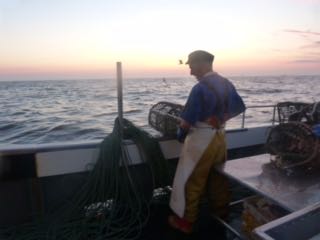 By 3.30am I had met Steve and Chris, John’s crew, and had been fitted with a pair of (enormous) oilies. As the crates of bait were loaded I watched a couple of boats go out across the faint silver band of wet sand and could just make out a few gulls on the far side waiting for their breakfast. When John arrived, the tractor pushed the trailer out into the sea and the boat slipped into the water. It was the most beautiful morning with the merest rise in the water. A smart catamaran, all kitted out with GPS and radar,the Richard William was named after John’s father, a renowned character and fisherman who died four years ago when it was being built.
I was lucky for my first crabbing trip – the weather was kind, and it wasn’t rough. It was magical watching the sun rise as the pots were pulled up, with the gulls flying overhead and perching on the stern ready for any discarded bait, and seeing Cromer church rising above the town as the day got lighter.

Steve on the winch lifted the pots, opened them and passed them to John who tipped them on to table and sorted them (anything that doesn’t measure 15cm across walks the ramp and plops back into the sea). John passed the empty pots to Chris who baited them – with raw fish heads, plaice without their fillets, skate without their wings – and stacked them, ready to go back in.

The pots are heavy and it’s hard work – we (they!) lifted 200 pots, hundreds of crabs. Young Chris wasn’t having the best of mornings, and kept being told to hurry up. I sat like Lady Muck, keeping out of the way, queasy with the smell of diesel and bait. They caught a few lobsters too, but it was early in the season and most of them were too small and went back in. And we caught one enormous (for this area) crab – the biggest Chris (and I) had ever seen. 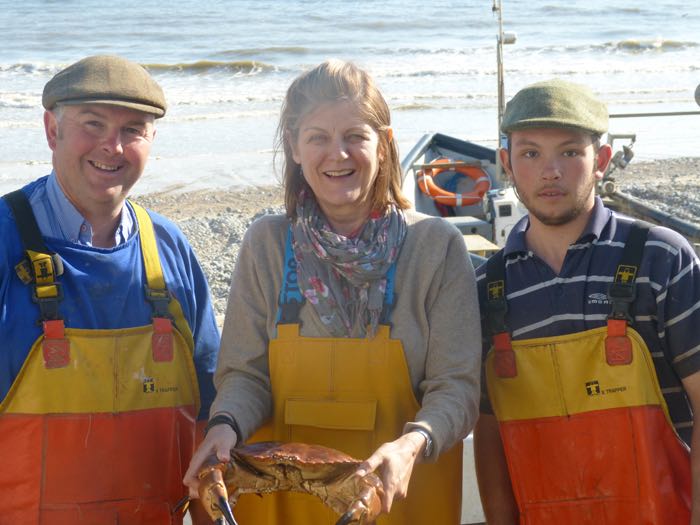 John told me he hasn’t had much education, “All I ever wanted to do was be a fisherman,” he said. He’s obviously a good one, and he’s a warm, charismatic man, a good talker. “Have crabs got brains?” I asked him. (Of course they have, silly me, they can see, and find food, and the ones who’ve been caught before know how to run up that ramp… ) “I don’t really know,” he said, “I suppose they have – but they can’t be that clever, if I can catch them!”

We were back soon after 8am, for breakfast at the Lifeboat Café – a fry-up, I did my best. Then I went for a little lie-down.