Round Britain with Baa: Harwich / CountryWives

David from West Mersea told me that Walton on the Naze, which sits on a headland south of the estuary where the rivers Orwell and Stour meet, is where ships would shed their ballast on their way in to Harwich, and the ballast made a perfect breeding ground for lobsters!

I wasn’t looking for a lobster, but I was keen to see Harwich as my mother had worked there during the war as a plotter. She joined the Wrens in 1941, age 17, and always talked of her time there with great affection. She made lifelong Wren friends, one of whom, Jean Syms, told me that they had worked at Parkston Quay and lodged in a tall house on the front at Dovercourt, south of the town. 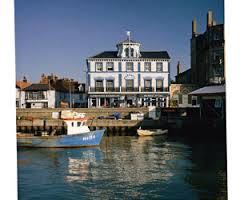 First I headed for The Pier which my hotel inspector friend, Fiona, rates highly and she said I’d get a great feel of Harwich from there. I pulled up in the High Street to get my bearings and somehow reversed into a black litter bin, whereupon a small Chinese man wearing a huge pair of waterproof trousers and who was waiting at the bus stop, leapt in the air hooting with laughter and waving his walking sticks at me. It was just a nudge, I certainly didn’t knock the bin over, and it returned to the vertical as soon as I moved forward, but his ranting rattled me. So when I turned into the car park at The Pier, which was small and very full, it took me ages (running backwards and forwards to check the back) to manoeuvre Baa into a space. I was exhausted and feared I’d never get her out again… coffee! 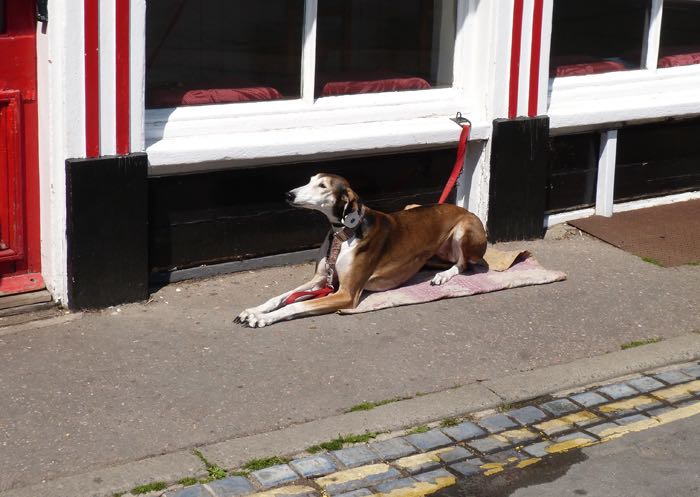 Tall, elegant and painted blue, The Pier is relaxed and chic, busy with a mix of business and yachty types, and looks out across the busy docks with seagulls wheeling overhead. The coffee revived me, and I set off to walk around the town. I saw a beautiful greyhound outside a small restaurant behind The Pier. It had belonged to a woman who lived nearby who had lots of dogs which barked all the time. She eventually left town – and the dogs to the care of her partner, who didn’t care for them at all. The greyhound kept escaping by jumping out of the kitchen window and coming to this restaurant, so they kept it. 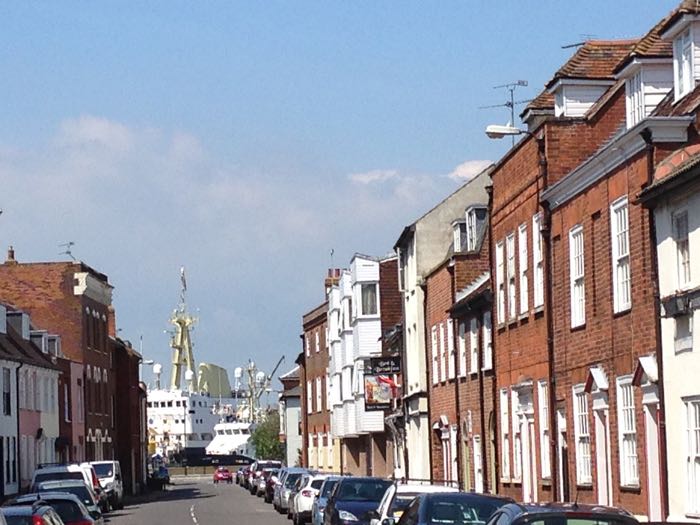 Most of Harwich doesn’t have the fashionable buzz of The Pier. Like so many once important trading ports it has a certain elegance, and reminded me of Dickens, but it feels impoverished, that it’s out on a limb and that work must be scarce. By contrast, outside the town at Parkston, the International Port at Harwich is vast and modern, busy with cruise ships and container shipping. I couldn’t find any evidence at Parkston of where Mummy and Jean did their plotting – I think it was some sort of underground bunker – and the man in charge of the car park had no idea either. As well as plotting, Mum learned to putty in windows when she was at Harwich, because she said the wind blew so hard from the North Sea into their lodgings that it blew the glass out. They had to sleep with newspapers between their skimpy blankets.

Dovercourt today looks like the comfortable, middle-class end of town and it was warm and sunny when I was there. But I can imagine that it was much less developed and pretty spartan in the 1940s.