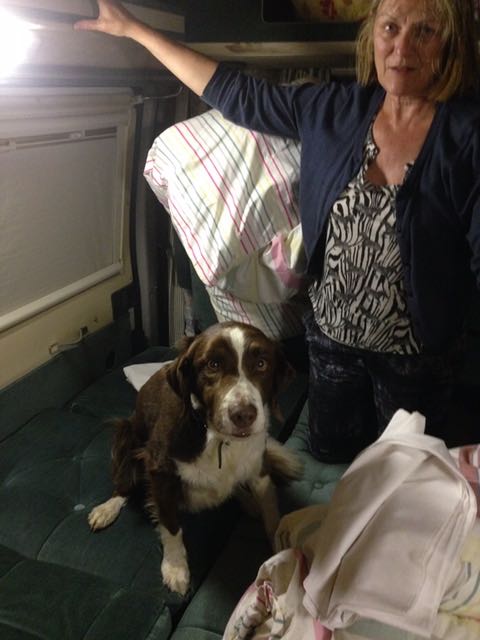 By the time I got to the north Norfolk coast I had been on the road for three weeks and had got used to driving and living in Baa. Her living area is made by Autosleeper: there’s a side-opening door on the passenger’s side, opposite a bench seat; and behind is the ‘bathroom’ and kitchen, and double rear doors at the back. I became increasingly impressed by the layout and design; how doors open and fold back to just the right place, how the berths pull out and fold away, and the captain’s chair (the passenger seat) turns around to face the small table – or you put the bigger table by the bench. In the bathroom the basin folds up vertically and the little carpet is removed when the shower is used (not often, I tended to wait to get to a camp site shower!). It all works most satisfactorily: like night follows day, the sitting room becomes the bedroom.

I wasn’t missing the creature comforts of home and found it surprisingly easy living in a small space, as long as I kept to a strict routine – and I am not a very routine person. You can’t, for instance, make the double bed (pull the single rear seat forwards, flatten its back cushions, pull the bench out sideways to meet the single bit, wedging the back cushions into the gap by the wall) before you get the bedclothes out from under the bench. The seat can only be lifted to access the storage when it’s in bench mode… once you’re in bed mode you can only retrieve the bedding by groping under the bed on your stomach and wrestling with a drop-down door… which, as I soon learnt, isn’t big enough to extricate the bedding. When Nick (husband) and Alf (dog) stayed with me the ritual of making the bed became more difficult – it really is a one-man job. 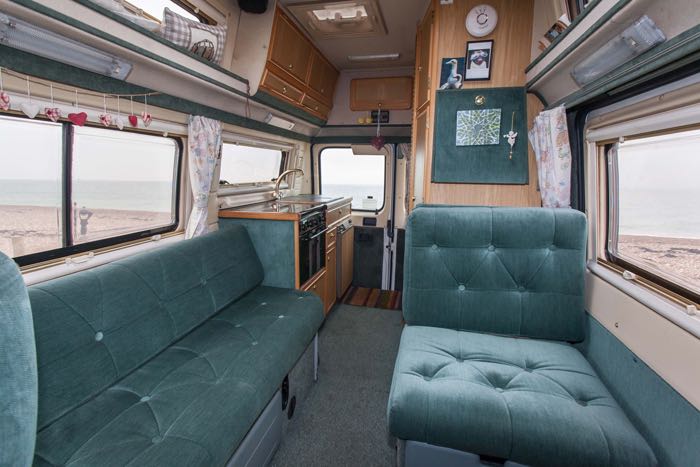 When in camp sites the fresh water would be filled (similar to a fuel tank, outside), the waste water emptied (via a tap near the exhaust pipe) and the Thetford loo cassette emptied (a small door on the passengers’ side) before doing the housework. My chief cleaning tool was a stiff brush (bought in Deal, Kent) which I used religiously every morning, sweeping Baa from the middle to the back doors, then from the middle and out of the side door, then the front foot wells. All the washing up done and put away, check the door/drawer catches are all pushed in and the power hook-up is put away – and I could set off.

The Woodhill Park campsite near Cromer was buzzing when I got there; it was the Bank Holiday weekend and I think I got the last pitch. It was a lovely evening and all around me there was music playing, hairdryers blowing and corks popping – a group of friends in three caravans were having a bit of a party. It is a lovely site and I walked through to the cliff top where campers have no electric hook-up, but the most wonderful view out to sea, with Cromer to the east and Sheringham to the west.

Two extremely smart ladies, whose shiny new Fiat Ducatto Escape was parked next to Baa, came back from walking their dogs (a Yorkie and a Poodle) and opened a bottle of wine. On the other side a lady sat outside with a glass of wine doing her crochet while her husband stood inside their caravan by his padded cocktail bar watching the football. What living! I felt a bit lonely – a bit of a saddo – eating the crab I had bought in Cromer and reading my book!

But tomorrow I would be back in Cromer for the Cromer and Sheringham Crab & Lobster Festival, where I hoped to meet up with John Davies who would take me out in his fishing boat.