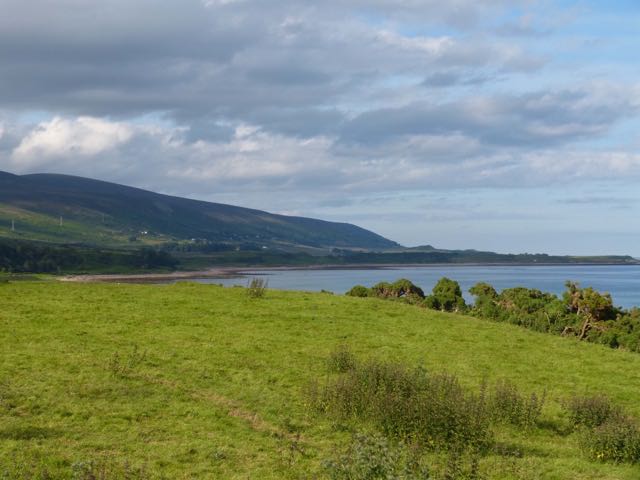 The angle of the weather map on television makes it look as though Scotland disappears after Inverness, and people said to me that there was nothing much between Inverness and John o’ Groats. But I thought the north-east coast was bold, dramatic and, the day I drove along it, it was bathed in sunshine with clear blue skies overhead.

I had a walk round The Royal Dornoch golf course – said to be one of the finest in the country – and then drove north to a tiny village called Embo, just because I could and it was en route to Loch Fleet. Once a fishing village, today Embo is a tourist spot with a few houses – several bed and breakfasts, a shop and a vast sandy beach. There was hardly anyone about. Loch Fleet is beautiful, fringed with pine trees and pretty farmland, sheep grazing on the lowlands with stunning hills rising up behind.

After the firths of Moray, Cromarty and Dornoch the route to the north-east corner of Britain is undulating and sparsely populated. The purple Sutherland hills rising up to the left epitomise the scale of the scenery; large and mighty, as dramatic as the sheer cliffs are to the right. There are few villages and not much traffic on the road – a tourist coach or two, a couple of tractors and a few cars. This feels truly remote; sheep graze the sloping pasture but I hardly saw a person. It made me realise just how different the opposite side of the country, the west coast, is to this one. The west coast is miles longer, laced with islands and rivers and vast sea lochs.

Despite the sunshine and the happy sheep, the journey was quite a white-knuckle ride as I was tired, and the road, which runs perilously close to the cliff-top, with an alarming stretch of hairpin bends around Helmsdale, needed all my concentration. Some of the bends made me feel quite shaky and I was glad not to be driving one of those tourist coaches. I moved from Sutherland into Caithness, the county which forms the north-east tip of Scotland, with two or three amazing hills rising up in the distance.

I got to Lybster, wondering where I might stop for the night (aah! It was already 7.30pm), and as the main road dips slightly inland I turned right down a 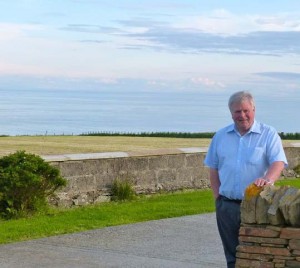 straight road into the village to see the sea from the end. The road came to an abrupt end and I did a 3-point turn where a man was standing by his drive gate, so I stopped to say hello. It was Brian and his house has the most fantastic view out to sea with, beyond his garden, a small field of newly grass cut with a few gulls and oystercatchers on it and then the cliffs dropping down to the beach. He said it was as calm as he has seen it for ages – but when the weather is bad it can be atrocious so, now that he is retired, he and his wife go on cruises to get away in the winter months.

Having been in the RAF he then became a nuclear engineer, and ended his career working on the fast reactor at Dounreay, 32 miles away on the north coast. He said Dounreay had been the world centre for fast reactors but sold out to the Chinese who now head nuclear power research. Britain will probably end up buying nuclear from them because, in the end, Brian thinks, we’ll have to go nuclear, more nuclear. France is already 80% nuclear.

I learned a lot more from Brian: that the beautiful hills I had passed south of Lybster, were Scarabens (620m) and Morven (706m), and that Scarabens was where the Duke of Kent, younger brother of George VI, died in his Sunderland in 1941 – an accident that was always surrounded in mystery (who was at the controls, etc). Must move on.. to Wick, where Brian said there was a campsite just over the river.