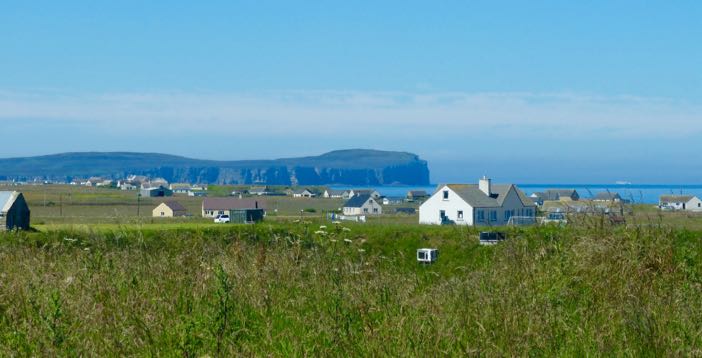 From the Orkneys ferry I drove west towards Dunnet Head, the most northly point of the British Isles, and where the Pentland Firth becomes the Atlantic Ocean. This northern coastal stretch is a low-lying, sparsely populated and incredibly remote – so much so that I almost felt I was in a foreign land. I took the first sign I saw to a campsite. A jolly woman (not from round here.. maybe Lancashire?) said yes, I could stay and that I would be their only visitor, there was water and loo emptying facilities but nothing else. Desperate for a shower, I thought about moving on, but just as quickly thought better of it. Where might the next site be? I was tired and my foot throbbed (from a horsefly bite when changing out of my walking boots yesterday on South Ronaldsay), and it was a nice spot, with Dunnet Head in the distance, for only £5. I parked in the little paddock next to the house with a motley group of cows with their calves looking inquisitively over the fence, and chickens and ducks inspecting Baa’s wheels. I could see the Old Man of Hoy, on the south-west point of Orkney, across the Pentland Firth which was as calm as a mill pond.

The next day, when I went to pay, the woman said that they were from Bury in Lancashire and they love it up here. But it’s tough in the winter (I could imagine, this sunny spell is not the norm) and they’re a long way from their family. I bought six delicious eggs.

Dunnet Head (58 deg north) is at the end of a narrow open road which winds through forests and comes out near the top of the Dunnet peninsular. I got out for a little walk about, felt glad I could say I’d been to Britain’s most northerly point, and headed back to the main road: the sun was warm and bright and I didn’t see another soul. I hadn’t realised that north Scotland was so sandy, with such wonderful beaches. One of the best is at Bettyhill which sits at the mouth of the river Naver, a huge, gaping, sandy river mouth, a bay, and the sand continues up river to the bridge where the main road crosses the river. 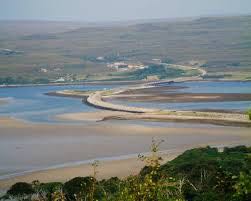 A few miles further on, after the village of Tongue, the road crosses a causeway across the Kyle of Tongue, a huge, shallow sea loch with a stopping place half way across on the south side. I pulled in to take in the drama of the view and thought, for just a moment, that I’d stay the night there, because I was short of diesel and that it might be better to face a crisis in the morning. I parked by an identical Baa where a man in a wife-beater vest and his wife were having a brew. He told me they had hired an extra camper and were driving in convoy as they had their grand-daughter with them – she was about 11. (I felt suspicious… but maybe it was my increasingly uncomfortable horsefly bites.) They were wild camping and he smelled like it. He looked at me a bit sideways and asked me if I was all right – being on my own, and I immediately felt I wasn’t. The horsefly bites gave me a twitch and I felt tired and vulnerable. For the umpteenth time asked myself why I always let this happen – it was early evening and I had nowhere to stay. Just to make it more exciting, there was the fuel worry. I got back on the road, heading west, and prayed that I would make it to a petrol station, before I ran out of diesel. 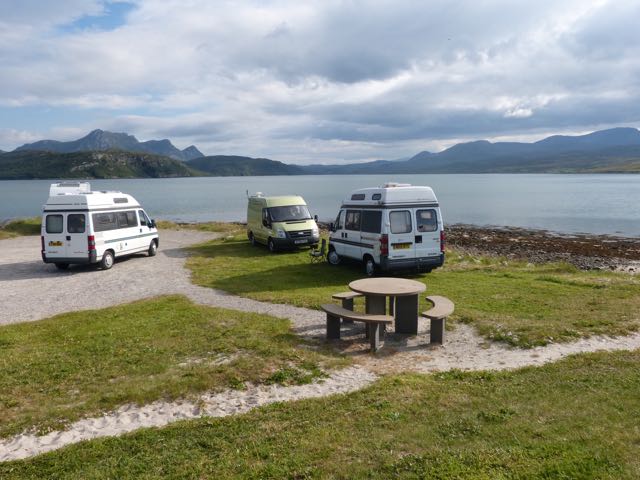 There’s a mountainous stretch after the Kyle of Tongue and I drove very steadily up the hills and down, my pleasure in seeing this really dramatic and remote part of Scotland marred by the lateness of the hour and the needle approaching empty. I referred to the map and thought I was unlikely to find fuel this side of Durness, where I knew there was a campsite, but I also realised I had to drive around Loch Eriboll before I got there and that is a huge sea loch. Please Baa, do not splutter to a twilight halt. By the time I got to the loch I was well on the E – but bless her she must have been running on vapour. Loch Eriboll is huge and spectacular and the A838 clings to its shores for more than 30 miles – while I clung, grim-faced, to the steering wheel, urging Baa along.

It was a lovely evening (8.30pm) when we got to Durness and I have never been so relieved. The petrol station was closed, but never mind tomorrow it would be open, and I found the campsite. My foot was very uncomfortable, but at least I could have a hot shower.