Round Britain with Baa: Orkney / CountryWives

The ferry arrives at St Margaret’s Hope on South Ronaldsay and the road to Kirkwall, the main town, links the islands of Burray, Lamb Holm and Mainland (main island, of course, not really mainland) by way of a series of causeways, which border the east side of Scapa Flow. Scapa Flow is a natural harbour in the middle of the Orkneys which was an important base for the British fleet in both World Wars. But in October 1939 a German U-boat did get into Scapa Flow, and it destroyed HMS Royal Oak, a ship which first saw service at the Battle of Jutland, along with the underwater defences, such as they were, that remained from WWI.

Winston Churchill ordered that a series of barrages should be built to defend Scapa Flow from further attack. They were made from tons of rocks in wire bolsters and clad in five and ten-ton concrete blocks, and they were built by 500 Italian prisoners of war. Under the Geneva Convention POWs were not permitted to undertake war work so this construction was described as improving communications between Orkney mainland and the three other islands, and that is exactly what they do today. 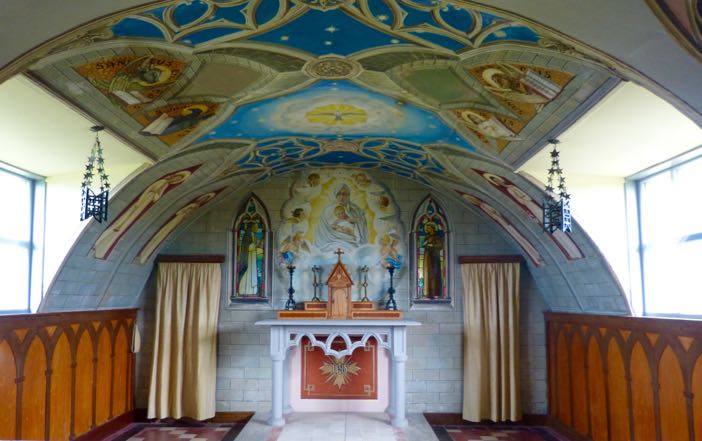 I stopped to see the Italian Chapel which was built by the Italian prisoners who worked there for so long, and wanted their own place of worship. It is such a touching and humble work of love, built from what was available – two Nissan huts put end to end and lined out with boarding, with the façade built up so as not to look like the end of a Nissan hut! The chapel sits surrounded by windy moorland and the sea, green and grey-blue, but its interior zings with colour and detail. It was painted by one of the prisoners, Domenico Chiocchetti, who copied The Madonna & Child over the altar, from a picture by Nicolo Barabino that his Mama gave him when he left to go to war.

I set off for Len and Susan Hunt, who had kindly said I could camp in their field, to the west of Mainland Orkney not far from The Ring of Brodgar, a perfect stone circle, and one of Orkney’s most important Neolithic attractions. 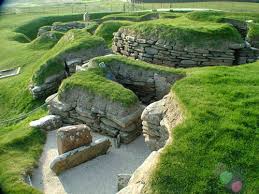 The islands’ Neolithic past is as much a part of Orkney as the sky and the sea, the farmland, the beaches and the fishing. Skara Brae is an incredible Neolothic village complete with a street, all the furniture stones so perfectly in place, dressers and box beds and a workshop. It was discovered by a local landowner after a storm blowing off Skaill Bay uncovered some remains, and he made it his life’s work to excavate the site, but now it’s part of Historic Scotland. It was occupied between 3200 and 26ooBC (so older than Stonehenge and the Great Wall of China) by people who are thought to have come over from Caithness. They farmed, grew crops, reared cattle, and they fished – but no one knows why they left. 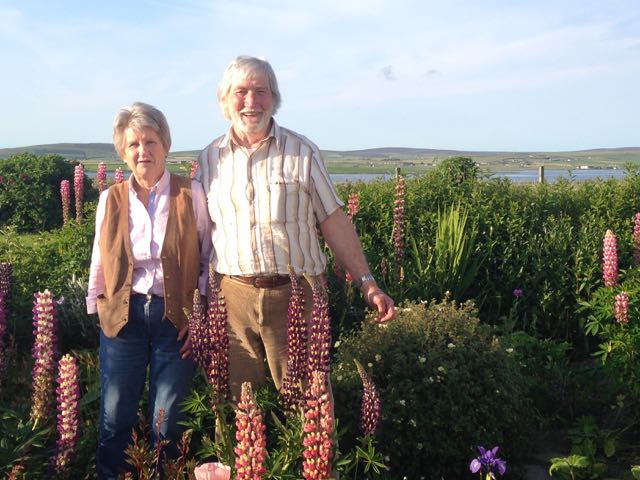 Meeting Len and Susan was a stroke of luck. I had stopped just north of the Cromarty Firth to have tea with Missy, a friend of my friend Di, and she asked how far north I was planning to go. I wasn’t sure – Orkney? Maybe Shetland? Then, Missy said, you must go and see my friend Susan on Orkney – she’s lovely and I am sure you could camp there. And that’s just what I did.

Their house, surrounded by grass fields specked with oystercatchers and sandpipers, is close to many of the ancient sites. They were incredibly hospitable and kind to me; in the evenings I sat with them in their conservatory with an enormous gin and tonic, talking and planning where I would go the following day – having a bit of banter, because I did spend a lot of time on my own. Then I returned to Baa for supper, slept like a top, and set off after breakfast the next day. That was my pattern for the next four days.