Round Britain with Baa: Over to Orkney / CountryWives

I didn’t feel inclined to stay at the Wick campsite because I didn’t need water or to empty Baa’s tanks and I had spent my camp budget on the Nigg ferry (£16). It was late (9pm) but still broad daylight so I drove straight through the town – noting the turning to the Wick Heritage Centre which had been recommended to me by Brian in Lybster. I drove out past Tesco on the road to John o’Groats and then turned left on to a smaller road, but found nowhere suitable to park up. I turned down a rutted track to a farm where I had seen a Landrover pulling up and found a man in black and green overalls welding something on the back of his tractor. I asked most politely if I could stop for the night – I wouldn’t cause any bother as I was completely self-sufficient, and would be gone early in the morning. He said no! I felt quite put out – most people I talked to had been so friendly, but he obviously didn’t like the look of me. Then I thought that if I was welding my tractor together in a draughty barn at 9 pm, maybe I wouldn’t feel so friendly either. I was to find, when I got to Orkney and Shetland, that at this time of year (late June) farmers work late into the night, sometimes finishing at midnight because it’s only dark for a couple of hours.

I headed back into Wick, crossed the river, and found the campsite, but there was a height restriction over the entrance and the warden’s number didn’t answer so I stayed the night on a bit of scrub outside the barrier. Not one of my camping highlights! My diary entry says: “Next morning beans and egg in Tesco car park, starving, no supper last night, got fuel.” 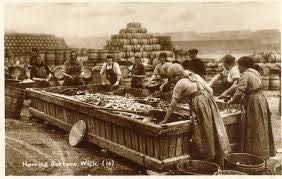 This north-east region of Scotland isn’t Gaelic, but Norse, with village names ending in –ster (ie Lybster), (on the west side they often end in –bos which is Gaelic). Wick comes from Vik, Norse for bay. The town centres around the harbour, though today it is a much quieter affair than it was 100 years ago. In 1900 Wick was one of the busiest herring ports in Europe and the Heritage Centre has incredible photographs (mainly by someone called Johnstone c.1895) of the fishing folk and the boats, and people living in crofts. Up to 2,000 people, fishermen and herring girls, would descend on Wick at the beginning of the season (June, July and August) and then they would follow the herrings down the coast finishing up in Gt Yarmouth in September. Girls worked in teams of three: two of them filleting the fish and the third one packing them in salt in barrels.

John o’Groats isn’t much of a place; a handful of scattered houses and the shoreline, a petrol station and a shop. The only thing that caught my eye – apart from the view north to Orkney – was a row of brightly painted sheds which looked brilliant against the calm, blue sea. And there’s a sign pointing south: Land’s End 874. I topped up with fuel (ouch!) and headed on, just beyond the village, to Gill’s Bay to catch the ferry to St Margaret’s Hope on the mainland of Orkney (that’s what they call it, the mainland, though of course it’s an island.)

The crossing takes about an hour and it was a beautiful day with guillemots, razorbills, and dolphins to watch. We passed close to the small island of Stroma a short way from the mainland, flecked with a few crofts and a herd of sheep. Despite basking in sunshine it all looked a bit forlorn and on closer inspection you can see that the crofts are derelict – there’s no one there. The islanders drifted away through the first half of the 20th century and Stroma has been completely deserted since 1962, because it just wasn’t economic to croft there. Apparently evidence of the community is still there to be seen: tables and chairs, pots and pans and cutlery.

The Pentland Firth is the stretch of water between the mainland and Orkney where the Atlantic meets the North Sea and there is a boiling stretch of currents and eddies which has caused many a nautical disaster. Our ferry swung around a bit, no more than that, causing all the car alarms to go off when we went through it and the birds bobbed about in the swell, but I certainly would not want to be aboard a sailing boat in it! I talked to three people who were going to stay with friends in St Margaret’s Hope and the last time they crossed they had seen Orcas in this stretch of water but alas this time there were no whales to be seen.