This is the first excerpt of Geraldine Onslow’s adventure exploring the UK coastline in her camper van Baa. With no agenda other than to drive in an anti-clockwise direction, sticking close to the coast, she is about to be inspired by the people she meets on the way…

The coastal trip would start from Dungeness, being the UK’s most south-easterly point (I would travel anti-clockwise) and somewhere I have never been before.

To set me on my way my friend Fiona was with me for one night and we planned to visit Dungeness, to see some of the churches of Romney Marsh, and to dine off marsh-fed lamb. Fiona is a hotel critic and was reviewing the lovely George hotel at Rye, so we set off from there.

Dungeness has the largest shingle beach in Europe, famous for being home to the late film director, Derek Jarman, and a vast nuclear power station run by EDF. The weather was appalling: strong winds are the norm here, and sand whipped up by the wind made visibility difficult as we got nearer the sea. Having seen nothing taller than a sheep for a few miles we could see the vast power station looming like an alien in the mist over to the right. Baa is 9’+ tall and doesn’t much like a cross-wind, but we drove on towards the lighthouse. There are a few small black clapperboard houses scattered in the shingle like lone beetles, and a few upturned boats (they must have been well strapped down), a fish stall and one pub, The Britannia, which has a reputation for the best fish and chips in the area – though there are no other challengers. 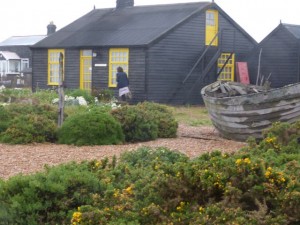 The van door was almost ripped out of my hand as I got out, my eyelids pressed shut by the wind … there was no way we could walk along the beach without taking off like kites. Ferocious rain started to fall – sideways – and we scuttled back inland, stopping to see Derek Jarman’s Prospect Cottage, black with its distinct yellow window-frames. Unsure if visitors were welcome Fiona braved the elements and approached the front door… They are not: a note on the window said we could look at the garden, but don’t peer in the windows. Prospect Cottage has native and cultivated plants growing with just the shelter of a few pieces of driftwood. How could it be that more than 600 of the UKs plant species thrive here? It’s something to do with water being held in small pebbles which sit on top of bigger pebbles. 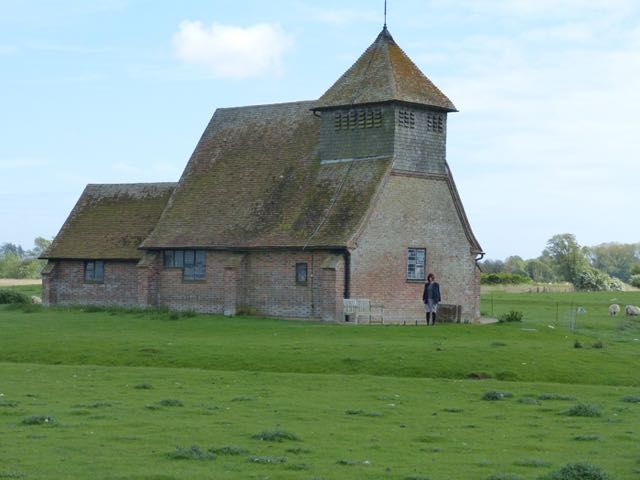 On to Romney Marsh where the wind dropped, and the sun came out. We headed first for St Thomas a Becket at Fairfield, the iconic marsh church which sits out in the middle of nowhere (collect the key from the cottage in the lane) with sheep grazing around it. There are 13 medieval churches on the marsh, which is indicative of what a thriving area this was in the Middle Ages, and the wealth of the wool industry. Most of the churches fell into disrepair during the Dissolution of the Monastries in the mid-16th century, or soon after it, so much restoration has taken place. But don’t let that put you off – I recommend starting with this one. We joined a WI group on a tour with a lecturer from the Historic Churches Trust at St Clements Old Romney (the one with pink pews) which was fascinating.

Chris Finn-Kelcey, whose family has lived here and farmed sheep on the marsh for more than 200 years, had said we could camp overnight. Baa sheltered in the lee of his barn in a yard like something straight out of a Henry James novel, and we had tea with Chris in the farmhouse which felt little altered over the years bar the introduction of electricity. A ‘looker’ (the local word for a shepherd) all his life, Chris is an interesting man, a builder, gardener and traveller as well as a farmer, and a life model for the last 24 years.

We left Chris after tea to prepare our feast – dressed crab, Romney lamb with ratatouille and a bottle of Barola. This meal was the most delicious and elaborate ‘on-board’ creation I had all the way round the UK, until my son Will snatched the prize, several months later, for cooking baby dover sole with a beurre blanc sauce in a lay-by outside Newlyn, in Cornwall.