Round Britain with Baa: the Essex coast / CountryWives

It was the most beautiful day in May when I crossed the Thames into Essex and I felt my trip had really begun. In Kent I had driven all over the place, been home once to sort out the van, and friends had come to see me. Now I had no visitors planned and was on track, with the sea on my right.

I had got used to driving Baa – though I was never confident reversing her and often in a car park would have to put the brake on and run to the back to check if I was about to hit something! There would be times when I would feel very homesick, but there were also advantages to being on my own. The bed-time routine was a lot easier – partly because there is only one bunk to prepare, but mainly because there isn’t another person to get in the way. Turning the sofa into a bed and moving long cushions in such a confined space is like a good work-out, and it must be done methodically. I had by now discovered that I was most comfortable sleeping in the drivers’ side bunk, pulled slightly away from the wall for extra roll room.

Southend on Sea, just 40 miles east of London, has seven miles of beaches and the longest pleasure pier in the world. It needed to be long so that the Victorian holidaymakers, who came here by steamer, could disembark safely and not sink into the marshes. It looks pretty awful today, pre-season, and I expect is improved by the thousands of visitors who go there in the summer. 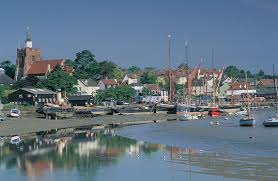 As well as its marshy fringes, the Essex coast is dissected by rivers (the Roach, the Crouch, the Blackwater and the Colne) and inlets, which mean most travellers stay on the main roads. I headed for West Mersea on the northern tip of the Blackwater Estuary and crossed the river at Maldon, where the salt comes from, and where the Vikings, after a spree of raping and pillaging along the Kent coast, fought the Saxons at the Battle of Maldon (ad991), close to the town. Today it is a pretty little town, with Georgian buildings and wide streets sloping down to the estuary with black Essex barges tied up at Hythe Quay.

I camped with David Cole, who has lived in this area all his life, and whose house looks south over the Blackwater Estuary. One of the great things about the trip was that friends said ‘oh you must drop in and see.. (David)’ or ‘don’t miss this church/shell museum/hill walk’, and that is largely how I decided where to stop. 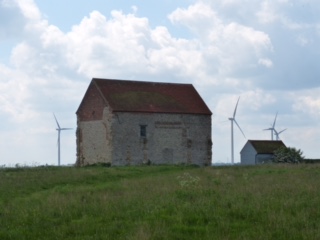 I could see Bradwell on Sea on the far side of the estuary, maybe three miles across the water from David’s house, but to get there the following day I had to drive about 35m – back to Maldon and along the south side of the estuary through lush, flat farmland with grazing horses and fields of wheat and rape. The Chapel of St Peter on the Wall at Bradwell is one of the oldest Christian churches in England, dating from the 7th century. Approached from the north, walking from the car park, the ancient church stands on a rise in the ground stark against a clear blue sky flecked with… wind turbines! As I drove around the coast I blew hot and cold about wind turbines. Here they are far out to sea and, though they don’t enhance St Peter on the Wall, they aren’t really offensive. In other places they are a real eyesore… But, I don’t want to knock renewable energy.

Colchester has been famous for its oysters since Roman times and I went to see The Colchester Oyster Fishery at East Mersea which sits on the Pyefleet Creek looking north to Brightlingsea. I saw boats bringing oysters in from the beds, and the sheds where they are cleaned, purified and prepared.

David told me, being a sailor himself, that the owners of serious sailing boats in the early part of the 20thC (The Americas Cup etc) recruited their helmsmen and crew from the Essex fishing fleet (Rowhedge, Wivenhoe, Tilsbury and Brightlingsea) because the men were such excellent sailors. I set off for Frinton, and drove through several of those pretty villages which are largely inhabited by commuters now. May is the most beautiful month.