There is some thing very special about going on holiday with your girlfriends. Especially when you have known them since they were mums at the school gate and your kids were 7 years old. All of them are now over 40!

With my particular bunch – every one of them is a star – they have supported me through TWO divorces and I have seen each of them through one! We have cheered and worried and laughed and cried together. We all TALK – an awful lot!

So it was that OG (Other Granny, at last recovered from her dreadful accident when a very fat lady fell on her) and two other very close friends embarked on a new – this time transatlantic – adventure.

Our first port of call was to celebrate the 70th birthday of one of our group. The venue was Seattle. Why? Her eldest son lives there. He is something terribly high up in a multi national company and lives in a home that looks like the White House. We, of course, have all known him since he was in short trousers, so it was wonderful to be picked up by his chauffeur and driven to our hotel. You could say “The Boy Done Good!” There wasn’t room for us in the White House, so the birthday girl’s son very kindly put us up in a boutique hotel called The Marqueen.

For anyone who is going to stay in Seattle, The Marqueen is a must. It has all the grandiose trappings of a thirties Hollywood movie. Plump golden putti adorning every mirror. Textures, fringes and damask. A double circular, Joan Crawford type staircase and an extraordinary collection of antique furniture and pictures. I was slightly puzzled by the height of some of the pictures in our room (most of them were waist high) maybe they were hung by a vertically challenged handyman. However it was the plumbing that we liked the most.

OG and I fancied a bath. We had been travelling for 24 hours and felt decidedly travel worn. We had, of course, consumed copious amounts of wine from the moment we arrived and had gone through three time zones, but the excitement had kept us going. The bath was enormous and very solid but appeared to have no plug. Disaster! we were so looking forward to a soak in the tub. We searched everywhere then I found a flattened rubber pancake and assumed it was the plug – but it didn’t work. The precious steaming hot water gurgled down the drain. I tried to stuff the damn thing  in the plug hole but to no avail. By this time OG was getting fractious. There are two things that make her cross. One is being hungry and the other is not being able to have a bath. She went to the front desk. The result of her investigations was one of the most startling sights I’ve seen in a while. It was a night porter with the most amazing combover. He had masses of bushy brown hair but none on the top of his head. Just an awful lot of hair hanging on one side. The other side was bald. Yes a little alarming but worse was the high pitched giggle as he tried to explain the plumbing of our room. It seems we had just not found the right knob! Now would you think that it would have been a metre above the bath on a back wall? Well it was. What went on behind the tiles by way of pipes I hate to think.

The next day, whilst the family were organising the party, we three guests were given the driver. Off we went to discover Seattle. It is very hilly with lovely snowcapped mountains around it and was quite an important port, being the Northern gateway to China. These days Starbucks and Microsoft have taken over. A quick visit to the market where they throw fish at each other, a diner’s lunch, and back to dress for the big event.

The party was wonderful. The next morning we four girls flew to Charleston. We couldn’t have travelled much further if we tried. Right from the extreme north west to the south east and with a hangover! 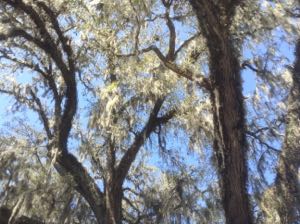 Charleston, South Carolina. What does that mean to you? I had envisaged gracious houses, impeccable manners, sultry humid evenings and Plantation houses. I got them all. The best bit was the pace… slow and deliberate, just like the horse drawn carriages that ferry the tourists around. Of all the places I have been to in the world, Charleston is close to the top for charm. It has succeeding in making every building in keeping – I did not see one single blot on the landscape. Gracious Georgian homes built to catch every breath of air are set side by side in wide boulevards. The trees are magnificent and often bow over, meeting in the middle and making graceful shady avenues. They are..” the mightiest trees that I ever did see.” Not only are they huge, but they have a silver grey moss attached to them which hangs down from the branches looking like wonderful Christmas decorations. The effect is both calming and cooling – apart from parked cars there is very little evidence of the 20th century .

Charleston is built on a grid system and I would strongly recommend anyone to travel there. It captivated me. It has great food, lots of history, and the friendliest of people. The city is BEAUTIFUL. But wait there was something even better – Plantation houses! For a very small sum you can book a tour to one of these amazing estates. We were lucky enough to be there when the azaleas were out. The houses and gardens are all incredibly well preserved (some of the owners still live in them.) We went to Magnolia Plantation, about 12 miles from Charleston and saw where the British had attacked (and I’m ashamed to say, burned Charleston to the ground). I found myself apologising to my fellow Americans which caused some mirth. At no time during our trip did we encounter any anti British feeling. Quite the contrary. They “luuuved” our accents and we” luuuved” theirs. The landscape was completely different to anything I had ever seen. Acres of swamps with dense trees. My fertile imagination does lead me astray within seconds. I could imagine desperate slaves trying to escape through this snake and alligator infested countryside . 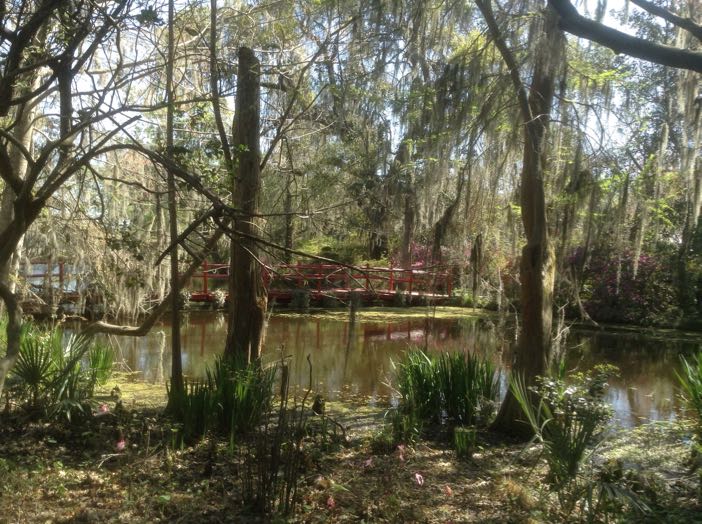 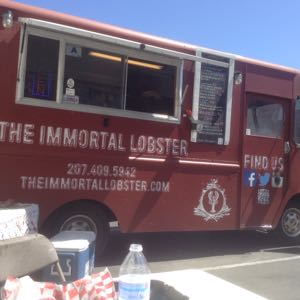 We four friends are all foodies. Now, not so quite worried about our figures (we have all been slim at one time in our lives!) we were happy to try new dishes. The first of course was grits. They sound awful but actually taste delicious – soft and creamy. We ate fresh lobster taco and salad from a lobster van for £5. The concierge recommended a fish restaurant and I decided to go for flounder- deep fried and rolled in Creole spices.  It arrived” erect” on my plate as if it had been electrocuted. The fish, which normally lives on the bottom of the ocean, was standing on its tail! The restaurant was so dark my photo didn’t come out. But believe me it looked like a statue at Cliveden. I tackled this fish with rigor mortis but without much success. The others had ordered easy things like prawns. I looked round to see if anyone had noticed the abattoir on my plate – fortunately they were too busy with their Margheritas.

The next episode is about 4 English ladies hiring a car and getting to Savannah. With tales for you of the slave auction house, and a hotel which just wasn’t ready for us gals, Trump and Cruz, cherry blossom time in Washington and OG and I pretending to be elderly MI6 agents!

All the best BPG